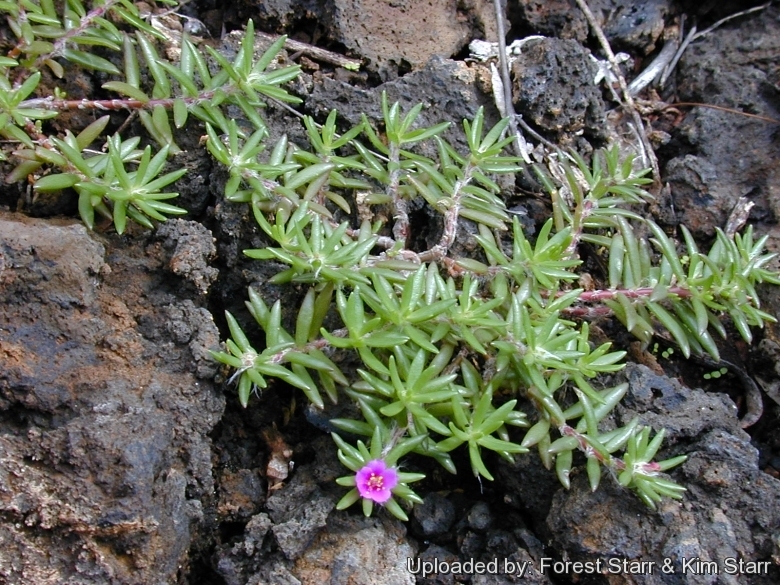 Origin and Habitat: Portulaca pilosa is a species of flowering plant in the purslane family, Portulacaceae, that is native to Americas. Now it is a widespread pan-tropical herb found from the southern United States and the Caribbean as far south as Brazil, Africa, southern Europe and Asia through the Middle East and the Indian Subcontinent to Malesia and Australasia, naturalised elsewhere and in some regions is considered a weed. In the United States, they are typically concentrated in the southern parts such as Arkansas, Texas, New Mexico, Florida, Mississippi among other states. P. pilosa is a documented invasive species throughout the Hawaiian Islands, the Galapagos Islands, New Caledonia, and Christmas Island.
Altitude range: 0–2000 metres above sea level.
Habitat: It is found sparingly in sunny, open locations, it prefers shallow, sandy or gravelly soils, often on rocky outcrops, but it can grow under a range of different environments. Such environments include dry soils, beaches, and disturbed habitats. They can also grow on roadsides and railroads, on limestone, granitic, and sandstone outcrops. In Hawaii, P. pilosa is officially documented from the coastline to dry lava flows over 620 metres in elevation. Cultivated as an ornamental plant, sometimes used in medicine.

Description: Now classified as Portulaca pilosa, shaggy portulaca was formerly called Portulaca mundula by many authors. It is a small annual or short-lived perennial, wildflower that closely resembles the much larger commercial moss-rose, Portulaca grandiflora, introduced from South America for widespread cultivation. Succulent, sprawling, woolly stems reach 20 cm in length and branch to form low irregular mounds or mats. The small purplish to reddish flowers are surrounded by long hairs, and are followed by shiny capsule with many black shining seeds. It is a highly variable species, known to include diploid and tetraploid forms. It is seen that it exhibits morphological variability during development with the immature plants having a wider, longer and flatter leaves than its mature counterparts. The mature leaves are narrower, shorter and more hemispheric in cross section. Physical differences may also occur due to the variable habitat that this species can be found in. Plants that grow in an arid environment tend to the greatest density of hairs. Plants that grow in a moister environment tend to have less hairs. Plants with very dense hair under a certain condition will produce growth with fewer hairs under a moist condition, showing its variability of growth. Plants growing in moist, warm environments tend to branch rather quickly into a spreading habit, with a secondary growth which is erect. Plants in dry and cool environment do the opposite in that they grow erect first and then branch more slowly.
Derivation of specific name: The name is derived from pilose, which means to be covered with long soft hairs.
Roots: Fibrous to semi-fleshy from a woody taproot.
Stem: Terete, prostate, decumbent, to weakly ascending, green when young, usually purplish red when exposed to sun, herbaceous, more or less succulent, many-branched (3-)5-20(-25) cm tall and smooth. Trichomes (hairs) are rather obvious at the nodes and are in inflorescence too.
Leaves: Alternate crowded on short internodes or clustered at the ends of the branches, (4-)9-15(-25) mm long, (0.5-)1.5–2(-4) mm wide, narrow, thick, and succulent, petioles ca. 1-2 mm long, with a tuft of curly white hairs 1-18 mm long in the axil, clothing the younger stems. Leaves about equal in length to the axillary hairs. Blades from narrow linear to oblong-elliptic, or intermediate of the two tapering to an acute tip. They can also be terete to flattened (hemispherical in section) convex on the back.
Flowers: Deep rose-red to purple, 4 or 5-petalled, 5-12 mm across, sessile crowded in congested terminal cymes of 2–3 or more flowers, subtended by a whorl of six to ten thick, narrow leaves ca. 10-12 mm long, bracteoles 0.7-2.5 mm long, involucral leaves resembling the cauline leaves. The flower-clusters sometimes overtopped by subsequent growth. Tufts of kinky, woolly white hairs ca. 3-18 mm long appear with the flowers and in the leaf axils. Sepals 2.5-5 mm long, sightly keeled, margins somewhat scarious, apex sometimes inconspicuously hooded. Petals, free, obovate a little longer than the calyx, 3-5(-10) mm long, 1.5-3 mm wide, rounded to slightly retuse with a central apiculum. Stamens (7-) 20-30 mostly 5-12 mm long, but can reach up to 37 millimeters; anthers globose to elliptic. Style 3-7-branched.
Blooming season: The flowering can be from late spring to early fall. They are year-round in tropical climates. Flowers expand from 10–12 o'clock in the morning.
Fruits (capsules): Oval to broadly ellipsoid, 1.5 to 4.3 mm in diameter, circumscissile at or slightly below middle, the lid a rounded dome.
Seeds: Granulate, 0.6–0.7 mm long, black or dark blue with a metallic luster, with a nearly circular shape, the testa cells jigsaw-shaped to stellate. The surface tuberculate, especially along margins.
Chromosomes number: 2n = 8-16 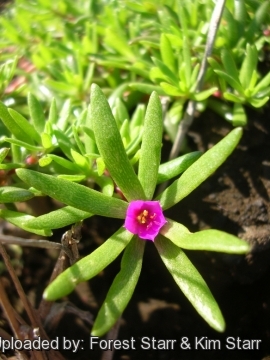 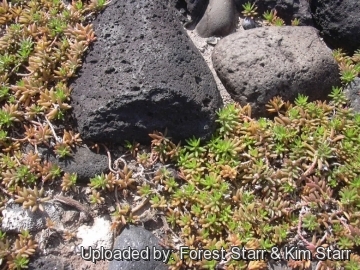 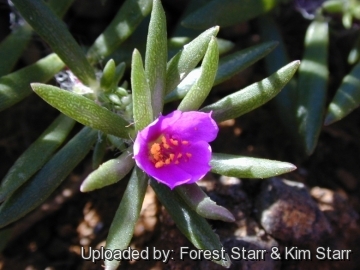 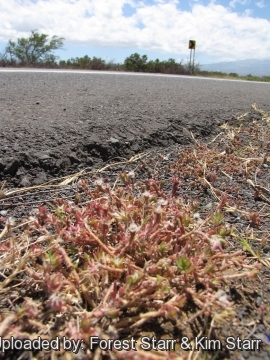 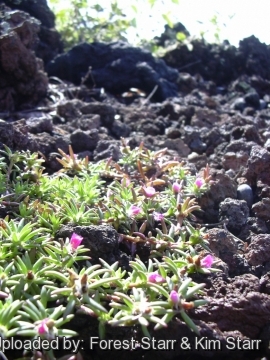 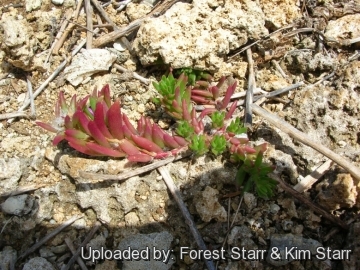 Cultivation and Propagation: Portulaca pilosa, is occasionally grown in temperate climates as an ornamental plant for annual bedding or as a container plant. It requires ample sunlight and well-drained soils. It requires almost no attention and spreads itself very easily. Although it survives difficult conditions, plants will produce more lush growth and flowers when provided sufficient moisture and rich soils. In places with old architecture it can grow between the stones of the road or sidewalk.
Soils: it grows well in poor, sandy or gravelly soils. The soil must be very well-drained.
Exposure: Needs full sun to flower.
Waterings: Drought tolerant, but flowers best with regular watering. Don't water with overhead irrigation, which can damage the flowers.
Hardiness: Plant seeds or set out moss rose plants after all danger of frost has passed.
Pests and diseases: No serious insect or disease problems. Watch for aphids. Stem or root rots can be a problem in wet soils.
Garden Uses: Good for poor dry soils where many other plants struggle. Edging or ground cover for beds, rock gardens or along walks. Containers, hanging baskets. Sprawl over stone walls.
Maintenance: Pinching or deadheading will promote greater flowering and reduce reseeding. Plants can be pruned or sheared in midseason if they begin to look straggly for a neater appearance and to promote fuller growth.
*Propagation: Sow seed directly in the garden after last frost date, or start indoors 6-8 weeks earlier. Set out seedlings and purchased plants at last frost date. Plants may self-seed. Seeds are as tiny as dust, so mix them with sand before sowing to make them easier to scatter. Seeds germination period, requires one to two weeks. In warm climates, Portulaca pilosmay self-seed. Established plants can also be propagated by cuttings.