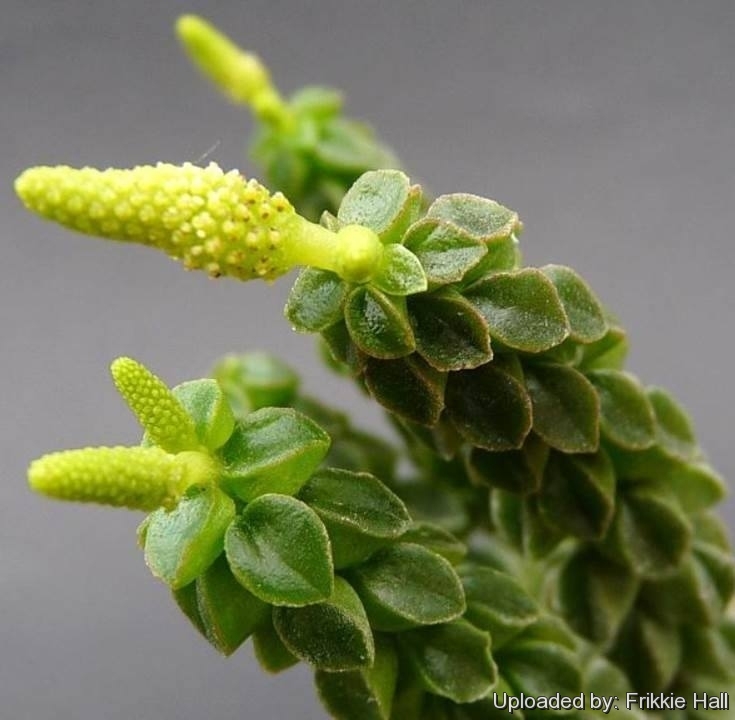 Origin and Habitat: Peperomia columella was found near the Río Utcubamba 6-7 km below Caclic (Km. 9-10 stone) on road to Chachapoyas. Departamento de Amazonas, provincia de Bongará. Peru
Altitude range: 1430-1575 meters above sea level.
Habitat and ecology: This species grows in crevices on steep cliffs. It is an endangered plant, since it has been found only in its type locality.

Description: Peperomia columella (columnar peperomia) is a peculiar succulent species with snake-like shoots having numerous thick, fleshy, bright green leaves, that are truncated, shaped like an horseshoe and composed of water-storing window tissue (a transparent tissue extending from the epidermis down into the leaf) which allows light penetration to the interior photosynthetic tissue. It is fairly unusual among xerophytes from outside Africa, in having leaf windows. The leaves are closely packed on 5-10(-20) cm upright stems. The stems branch profusely and send up new growth from the base. Occasionally, plants produce diminutive tail-like flowers in spring.
Derivation of specific name: Latin “columella” little column, pillar, for the leaves that are arranged so close to one another that hide the stalk, giving the whole plant the form of a small columnar body from which it derives its name.
Stems: Ascending, terete, succulent densely covered by the alternately arranged leaves and up to 1 cm in diameter.
Leaves: Sessile, arranged in five spiral lines, sub-hemispherical, glabrous, mooth 8-12 mm long, 5-8 mm wide, up to 6 mm high, folded lengthwise, forming a wide metallic window on upper surface where it is held incident to the light. In cross section they are depressed obovate and ovoid in side view. Towards the tip, they are pointed and rounded at the base. The leaf edge is provided with bladder cells. The core of the leaf is composed of a greatly enlarged multiple epidermis surrounded by chlorenchyma on all but the window side. Superficially, the leaves of Peperomia columella are similar to those of Senecio rowleyanus, but ontogenetically they differ. The water storage parenchyma of P. columella is derived from the protoderm while in S. rowleyanus the core is derived from the ground meristem. Thus, by different means, the two plants have achieved the same thing: succulence, low surface area/volume relationship and maximum utilization of light. The light is more or less evenly dispersed over the whole assimilatory tissue (chlorenchyma) since the water storage tissues disperses the solar radiation beam. The relative volumes of green and windowed tissues varies from young to old leaves along a shoot, with old leaves having a greater proportion of window tissue. During drought, the window tissues of older leaves decrease in volume while increasing in volume in young leaves, suggesting that water is translocated from the older to younger leaves.
Inflorescences: The inflorescence are small, appear at the top of the stems, and consist of 2 to 5 lateral branches 10-18 mm long and up to 3 mm in diameter with tiny flowers. The ovary is obovate. 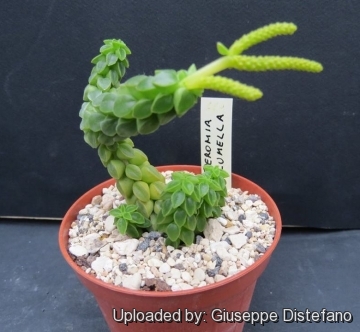 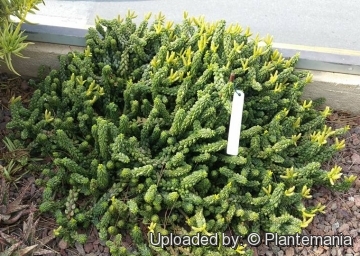 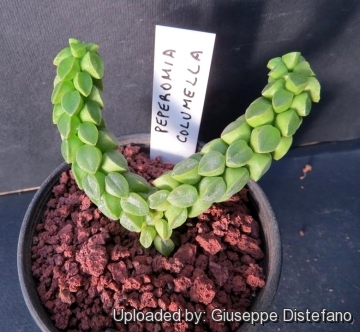 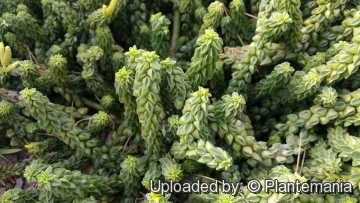 Cultivation and Propagation: Though the succulent peperomias produce greenish-white, panicle-like flower spikes, they are grown primarily for their foliage. They are not hard to grow but avoid over-watering. If you are looking for something different in a Peperomia, this is it.
Soil: Requires very porous soil (mix of some gritty, sand and humus) with excellent drainage, a regular cactus mix can also be used. This plant is a rick dweller and does best with a culture that gives excellent airflow and a soil that allows the water to run quickly away from the roots and not promote sodden conditions. These plants like to be a little pot bound. If placed outside during summer and to avoid rotten roots, make sure that rain water can flow out of the pot’s hole. Outdoors, grow in well-drained soil in partial shade.
Watering: From spring to autumn Peperomia columella can be deep watered, what’s running out of the pot should be removed after a few minutes, before watering next allow to dry. and sparingly during winter with water that is room temperature. Though you hear that these plants favour daily misting, it is not necessary, especially if room is not overly dry. Despite being very succulent it prefers not to dry out and to remain growing throughout the year.
Fertilization. Fertilize during the growing season with a half diluted cactus fertilizer. The fertilizer can be given monthly from spring to fall. Fresh bought or recently repotted plants don’t need to be fed for the first six to eight weeks.
Exposure: Peperomia columella grow best if located bright and sunny throughout the year with ample airflow. Avoid drafts. Indoors, they require bright indirect light, but do tolerate low light.
Hardiness: Not particular about temperature, but best in a moderate to warm place. Peperomia columella can be cultivated at room temperature throughout the year, if not, it should be placed at approx 10 °C. Protect from frost.
Uses: They are particularly attractive at the front of the bench, or on a shelf. Columnar peperomia can also be grown in individual pots or it can be combined with other slow-growing miniatures in an indoor dish garden and are good for windowsill. In warm, sub-tropical or tropical areas, these plants maybe grown outside in rock gardens.