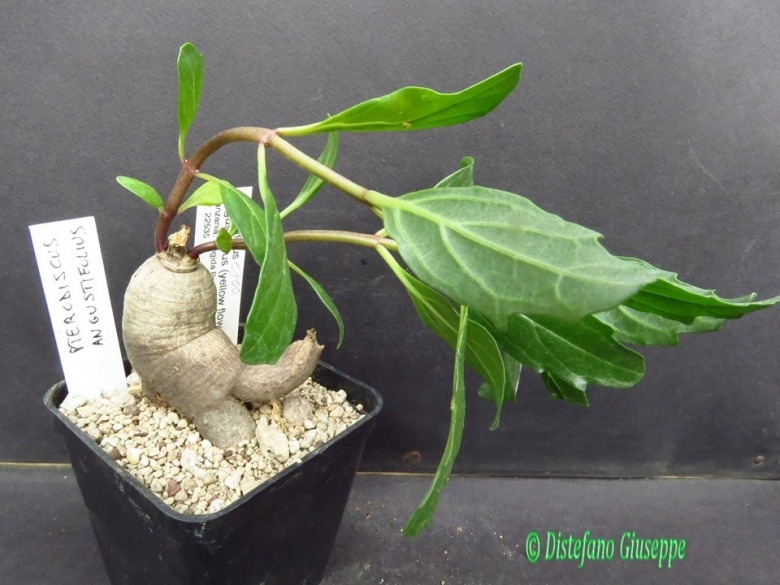 Origin and Habitat: Tanzania and North Mozambique. Pterodiscus angustifolius appears to be quite abundant over a small area south of Lake Victoria; from here there is a big jump in the distribution to the Ruvuma River.
Altitude range: 1200–1300 metres above sea level.
Habitat and ecology: This species grows in black soil in rock crevices.

Description: Pterodiscus angustifolius is a perennial herb, 10–20 cm high, consisting of 1–3 very short woody aerial stems arising from a napiform subterranean tuber. Flowers yellow or orange.
Derivation of specific name: angustifolius Latin 'angustus', narrow; and '-folius', -leaved. Narrow-leaved Pterodiscus.
Annual stems: Several, simple or branched near the base, more or less fleshy, spreading, 9–20 cm long, purplish, glabrous, fairly densely leafy.
Rootstock:** Thick.
Leaves: Crowded, more or less fleshy, petiolate, ascending. Blade narrowly oblong to lanceolate, up to 2.5–13 cm long, 6–12 mm broad, slightly undulate to slightly dentate, dark green, glandular-mealy on both surfaces when young otherwise glabrous, very gradually attenuate at the base into a 5–25 mm long petiole. Obtuse or subacute at the apex.
Flowers: Sweet-scented, dark yellow or orange, sometimes with a purple blotch in the tube. Pedicels 1.5–3 mm long. Corolla tube nearly cylindrical, straight or slightly curved, 20–40 mm long, limb about 20 mm in diameter, slightly oblique at the mouth, with hairs within in the upper part particularly in the throat. Lobes varying in shape from ovate to transversely elliptic, subequal, the upper one larger, 7–12 mm. long, 6–15 mm broad, laterals 6–10 mm long, 5–8 mm broad, lower 5–7 mm long, 8–10 mm broad, ,all the lobes crisped and ciliate, hairy within, glabrous outside. Filaments 4–9 mm long. Ovary ovoid, disc small inconspicuously unilateral, ovules 1–2 in each cell.
Fruit: Ovate to conical, in lateral view 10–15 mm long, 6–10 mm broad at the base, only very slightly compressed, 4-angled, obtuse to subacute at the apex, woody the faces of the body of the fruit often tuberculate, angles with narrow sclerified wings 0-5–1 mm broad, with a single (rarely 2) oblong seed per locule, indeishent.
Seeds; Elongate-elliptic, about 6.5 mm long, 2 mm broad, with a narrow collar at the apex.
Taxonomy notes:*** Pterodiscus angustifolius has very peculiar strongly sclerified, woody fruits similar to those of Pterodiscus coeruleus. These fruits have narrow sclerified (hardened) and not pergamentaceous wings (except at heir extreme margins). The locules contain a single oblong seed, and the fruit is indehiscent. Engler described this species twice: in 1894 as P.angustifolius, based on a specimen without fruits, and again in 1902, based on a specimen that possessed mature fruits, in a separate new monotypic genus as Pedaliophyton busseanum Engl. By choice of the generic name Pedaliophyton he apparently intended to indicate the similarity of the fruit of his new genus with the equally woody fruit of Pedalium. Bruce (1953) detected that P. angustifolius and P. busseanum are synonyms, and transferred P. busseanum in spite of the aberrant fruit to the genus Pterodiscus.

Cultivation and Propagation: Pterodiscus angustifolius is a caudiciform plant that grows relatively easily and doesn't produce as many stems and leaves as other caudiciforms, making its management easier. The caudex generally underground in the wild is often raised in cultivation.
Growth rate: It grows well, though very slowly, but it possible to increase the speed of growth to some extent by providing adequate amount of water, warmth, and fertilizer during the active growing season, but it’s susceptible to rotting if too wet.
Potting medium: Since roots are quite succulent, use a slightly acidic cactus mix or add extra perlite, vulcanite or pumice to regular soil potting soil. A gritty, very free-draining compost is suitable, and clay pots help the plants to dry out between watering. It like pots with generous drain hole, re-pot every 2 years.
Frost tolerance: Due to its African origin keep warm in winter, the minimum safe average temperature is 5°C, although it can go lower for short periods. It can be grown outdoors in frost-free climates, need anyway to kept above 0°C and dry in winter.
Exposition: It likes a sunny position, but avoid direct blasting sun in summer. Keep the caudex in the shade.
Watering: It should be watered regularly when it begins to produce leaves in spring/summer and kept drier in Winter. Like most caudiciform it likes lots of water during warm and hot weather, and is accustomed to growing under other plants. Make sure after watering, that the soil is actually wet. Many potting soil mixes will have only the surface wet, with water running down the outside of the root ball, and most of the soil dry. Run your finger into the soil 15 minutes after watering to check. Too high or too low temperature will induce dormancy.
Traditional uses: An infusion made from the whole plant is given to cows to remove retained placenta after delivery.
Maintenance: Repot every two years.
Propagation: The mode of Propagation is by seed.