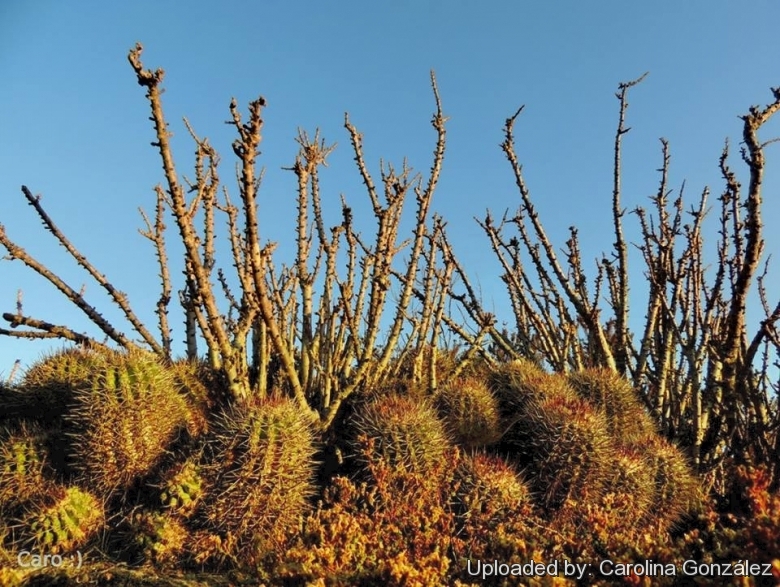 Origin and Habitat: Antofagasta, Atacama and Coquimbo (very common in the hills of the Valle de Elqui), Chile.
Habitat and ecology: Oxalis gigantea grows in xeric shrublands predominantly in coastal deserts where summers are dry (drought periods of 6-10 months long), and episodically the winters as well (Precipitations 100-300 mm per annum). The plants obtain water mainly from condensation. The vegetation is mostly composed of shallow-rooted cacti (Trichocereus spp., Eulychnia spp., Copiapoa spp. Eriosyce spp. etc.) and drought-deciduous shrubs. Oxalis gigantea and tall cacti often forms the most prevalent features of the vegetation. This succulent shrub is pollinated by hummingbirds.

Description: As might be inferred from its specific name, Oxalis gigantea is a giant wood-sorrel, probably the largest known species of the genus. It is an extraordinary drought-deciduous shrubs that makes a large, woody bush, often so much as 1.8-2.4 m tall (occasionally 5-6 metres) and appears unique in the genus. Its erect, slightly branching stems are thickly furnished from top to bottom with short spurs, carrying rather fleshy, green leaves and countless golden blossoms. Leaves are shed whenever the conditions become arid. Depending on the rains a plant may gain and lose its leaves several times a year. Oxalis gigantea is leafless most of the year and usually remain leafless during coldest part of winter.
Stem: Slender, few branched, erect to sinuous and drooping, glandular often 2.5-5 cm in diameter (up to 7.5 cm at the base), and with numerous spur-like short shoots, at fist succulent, becoming woody with time, pale brown and minutely pubescent when young, later becoming woody and with dark grey to almost black bark.
Roots: Fibrous.
Leaves: Many, fleshy, small, 3-foliolate, very variable in size, leaflets small, 3.5-7 (rarely to 14) mm long, entire, inversely heart-shaped, fleshy, glabrous, bright shining green, hairless or sometimes pubescent;
Inflorescences: With solitary flowers or 3- to 6-flowered umbellate cymes. Pedicels to 3 cm long.
Flowers: Up to 3 cm long, 1-2.5 cm across, bright yellow. Sepals unequal, somewhat obtuse, tip pubescent, glabrous else-where. Petals oval. Stamens fused at base, 5 taller pubescent. Style pubescent. Ovary glabrous.

Cultivation and Propagation: Oxalis gigantea seldom a fibrous rooted, a single bare stem which sprouts large yellow flowers and tiny green leaves. It does go to sleep at odd moments but is a curious plant and takes up little space.
Growth rate: It is a very, very slow-growing shrub, but long lived.
Dormancy: Oxalis gigantea are summer dormant. This means that in spring plants begin to loose their leaves and reduce metabolic activity significantly. Leaves will reappear and growth will resume sometime after mid-September, occasionally in other time of the year when the conditions are favourable.
Soil: Needs a very well drained soil mix. Be careful that the plant is not placed in an area that accumulates water.
Exposure: It grows best in full sun to part shade. Very small plants can be protected from full sun. Larger plants do best in full sun, but even then plants need shade during the first summer to avoid sunburn. They need freely circulating air.
Watering: Watering should be greatly reduced during the lust summer months to prevent rotting. Plants are watered and allowed to dry thoroughly before watering again. In the cool weather, when the plant is actively growing, water regularly. Small plants in pots may need water weekly. Leaves which turn yellow or brown and drop in late spring are a signal of the onset of dormancy, and cannot be encouraged to resprout with watering. Watch the tip; if it begins to shrivel or shrink, water the plant, otherwise it is best left alone. The onset of leaf buds, or the sudden appearance of leaves marks the end of the dormant period.
Hardiness: Cold tender. .
Fertilization: If fertilizer is used, it should be diluted to ¼ (one-quarter) the recommended rate on the label.
Traditional uses. Oxalis gigantea is used for tanning and dyeing because of its high quantity of tannin.
Propagation: It can be propagated from seed or by cuttings, which are, however, reported as rooting only with difficulties.