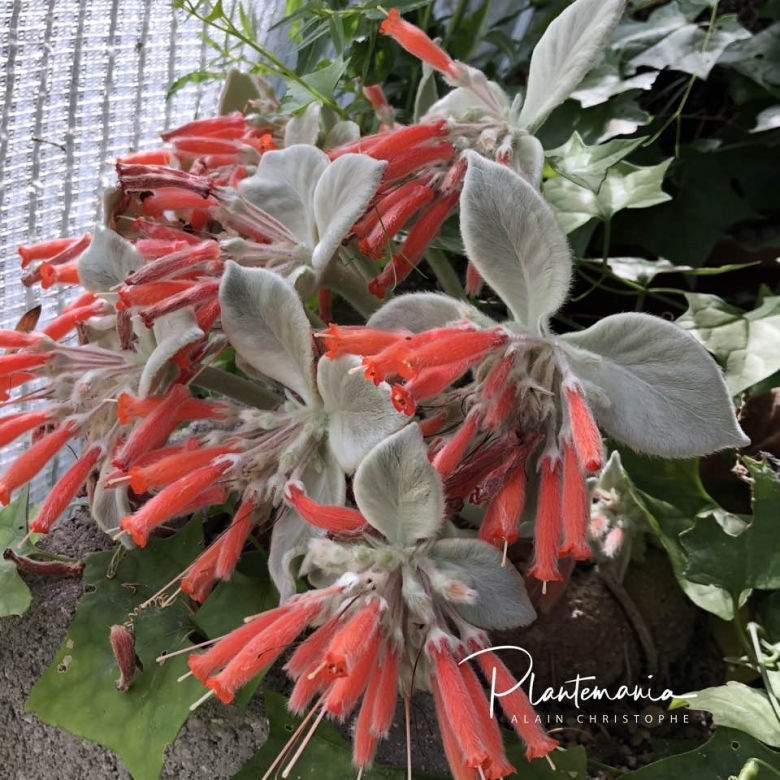 Origin and Habitat: Brazil (Southern America)
Habitat: It is a lithophyte often found growing in crevices on rocks or cliffs amid ferns and other succulent species like Lepismium cruciforme, which are normally epiphytes, but can be found growing on steep hillsides.
Ecology: They are pollinated by hummingbirds.

Description: Sinningia canescens is a tuberous herbaceous perennials with silvery-white furry foliage and large, powerfully fragrant tubular red-orange flowers. Plants upright about 30 cm tall and 35 cm wide. This species is one of several South American gesneriads which are borderline succulents, caudiciforms, or waterplants with large fleshy tubers and is often cultivated by cactus and succulent enthusiasts as a caudiciform.
Tuber: Perennial, flattened spherical, apex sunken, 6-10 (or more) cm in diameter with light brown bark, fleshy but solid and partially exposed above ground. The tuber is a storage organ that allows the plant to survive periods of drought, cold or other conditions inhospitable to growth.
Annual stems: About 10 cm tall, completely deciduous, stumps remain on tuber. The stem growth habit is determinate (the branch stems ends with 2 or 3 leaf-pairs or flowers and is unable to grow further )
Leaves: In whorls of 4(-6), ovate, up to 15 long and 10 cm wide, silvery-white densely covered bay silky hairs.
Flowers: Bright salmon red in clusters of 3-5 in leaf-axils or at the ends of stems, growth similar to Sinningia cardinalis but sometimes sends up a central stalk with leaves and flowers in terminal cluster on top. Flowers nodding, short-lived. Calyx-lobes tapering from a triangular base. Corolla-tube narrowly tubular to cylindric, variously whitish hairy. Calyx 3 cm pink to orange to red, dark purple with brown-black lines at throat: lobes almost equal. Disc-glands 2.
Blooming season: Spring to early summer. Despite their tubers these plants, under ideal conditions, are capable of blooming off and on all through the year. Tubers may flower without planting. 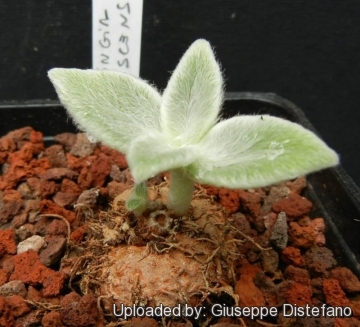 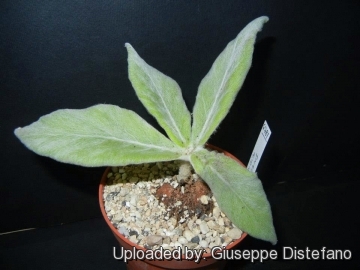 Cultivation and Propagation: Sinningia canescens has a dormant period after flowering (winter rest) and comes into growth in early spring. After a period of dormancy the tuber will send up new growth and the cycle will repeat. Some cultivars can be induced to remain in almost perpetual growth, with no period of full dormancy. Others may go dormant, and never "break dormancy", or begin new growth. But most plants will produce new and better growth after a period of dormant inactivity.
Soil: Use a lime free soil that retains water yet drains well with a little added pumice will suffice.
Pots: Always use a pot with a hole and provide a good drainage.
Watering: Drench the soil and let it become moderately dry between waterings when it is in growth and during the winter or dormant season must be kept very much on the dry side. Perpetually wet soil may result in rotting of the tuber, while dry conditions will usually induce premature dormancy.
Fertilization: Needa a regular light fertilization during growing season including all micro nutrients and trace elements or slow release fertilizer at the rate of 1/4 the dose indicated in the label. However some of the more robust cultivars will respond favourably to a more concentrated solution, and some of the smaller cultivars need very little feeding.
Exposures: It requires bright conditions, but not sun and can be grown eventually under bright fluorescent lights or in a greenhouse and many tolerate windowsill conditions if humidity can be kept up and bright light provided without too much direct sun.
Pest & diseases: Prone to mealy bugs. Always inspect any new plant for pests before introducing it to your home or greenhouse.