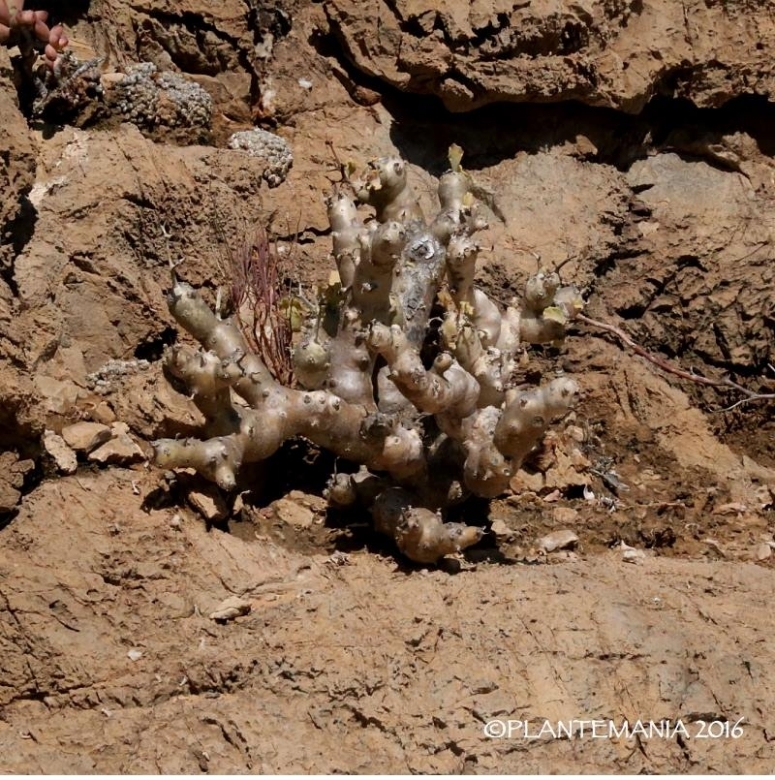 Origin and Habitat: Southern Namibia and Northern cape, South Africa, near the mouth of the Orange River.
Habitat and ecology: Pelargonium klinghardtense is a characteristic plant of the rock deserts of of Namibia and Great Namaqualand.

Description: Pelargonium klinghardtense is a nice pachycaul (a stem succulent) with chunky, fleshy, gnarled stems that attains heights of up to 60 centimeters. The flowers are pure white, each with five prominent greenish-yellow sepals and five petals, almost regular in shape. Its leaves are relatively large, simple, succulent and glaucous-green, and borne on dwarf shoots. The leaves will die off through the summer. Young specimens produce a short, somewhat ovoid highly succulent caudex, giving rise to terminal cluster of foliage. P. klinghardtense is easily recognized by its smooth, sparsely branched stems. Unlike many other so-called caudiciform pelargoniums, this species retains a fairly compact, "fat" habit, even when it branches and elongates in later life.
Derivation of specific name: The epithet klinghardtense refers to the Klinghardt Mountains in southern South West Africa/Namibia where the species was first discovered.
Stems: Thick, fleshy, gnarled. The main stem is branched from the base, grey-green to yellowish-green, erect, smooth, appears glabrous to the unaided eye but is in fact microscopically pubescent and carries branches which are short and succulent with a rosette deciduous leaves at their tips.
Leaves: Simple, relatively large, succulent, and borne on dwarf shoots. They are glabrous, bluish grey-green, glaucous, with a slightly powdery bloom, oval-lanceolate, spathulate or somewhat spoon-shaped. Base narrowly tapering merging into a short, fleshy petiole. Each leaf is simple, with a prominent central groove, conspicuous veins and a toothed, somewhat scalloped, or deeply cut, margin (crenately lobed).
Inflorescence: The flowers are borne in few-flowered pseudo- umbels on a much-branched panicle-like inflorescence at or near the apices of the vegetative branches. The umbel is from 2 to 6(-10) flowered.
Flower. The five petals are almost regular in shape and only slightly longer than the sepals. The petals are small, pure white, without any markings. The upper two petals are spathulate with short claws and suddenly bent backwards by more than 90° from their base. The lower three petals are narrowly inverted egg-shaped or spathulate with short slws and bent back from their base less than 90°. There are five fertile stamens of varying length. The pollen is orange coloured.

Cultivation and Propagation: Pelargonium klinghardtense is a species with special appeal to growers of caudiciform plants. It grows on winter rain and heads for summer dormancy. The growing season in northern hemisphere is from September to March. P. klinghardtense has a somewhat "tricky" reputation in cultivation and is very sensitive to excess moisture and it will quickly succumb to rot if overwatered. Paying attention to the particular growing requirement of this is especially important. If you provide it with the right conditions, it will reward you with its unique shape and size. However, this is a tricky plant that is very particular about its growing conditions and require the right maintenance in order to keep happy. In cultivation it requires a sunny, warm location and little water. Imported plants are fine initially but soon go leggy, best from seed.
Soil: It should be planted in a totally free-draining, gritty mixture, containing a small amount of well-rotted organic matter. Perlite can be substituted for pumice, but it tends to rise to the surface of the mixture. It can grows outdoor in sunny, dry, rock crevices (protection against winter wet is required).
Repotting: Avoid to repot frequently. This plant may stay in the same pot for many years.
Fertilization: Be careful not to apply too much fertilizer. Feed it once during the growing season with a fertilizer specifically formulated for cactus and succulents (poor in nitrogen), including all micro nutrients and trace elements diluted to ½ the strength recommended on the label. It thrives in poor soils and need a limited supplies of fertilizer to avoid the plants developing excess vegetation, which is easily attacked by fungal diseases. Ensure a very good ventilation.
Watering: Water from early February to late April, then from early August to late November, at a minimum temperature of +14° C. Keep completely dry in summer and winter, at a minimum temperature of +8° C. In cultivation it is usually so overwatered and overfertilized that it is hardly recognizable as the species that it is. Correctly grown, this is a beautiful, compact and dense plant.
Hardiness: Protect from frost.
Exposure: Light shade or morning sun in summer (avoid direct sun as it grows wild among rocks and under the shade of other plants) and in summer it need to be kept in a cool area.
Reproduction: There are two main ways to propagate members of the genus Pelargonium. Plant seeds any time of the year, but a spring or autumn sowing of seeds is usually most successful. Seeds need cool temperature to sprout. Rooting cuttings of stems is another method. Germination can be very erratic, and can take place over a long period of time. There is a way of overcoming the long time periods and the inhibitors; that is, by scarifying the seeds.