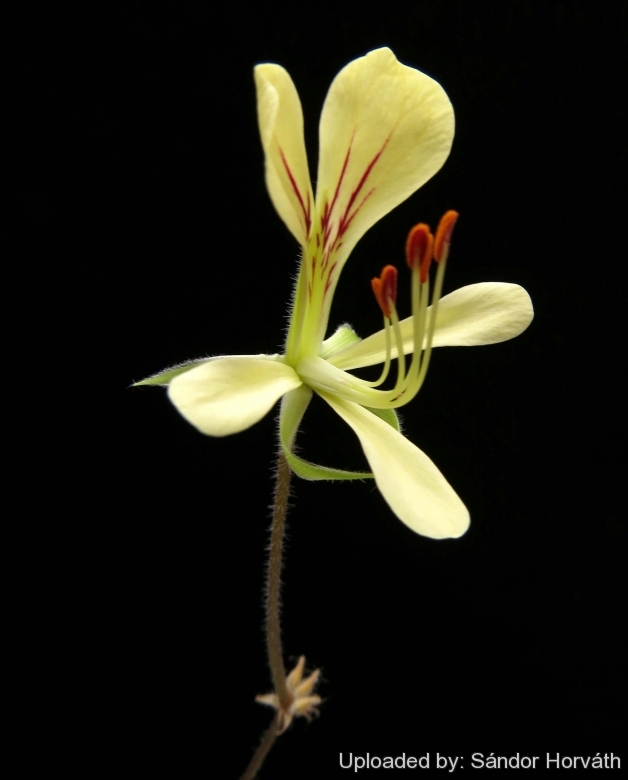 Origin and Habitat: Richtersveld to Komaggas, Northern Cape (Northern Namaqualand) , South Africa. Known from nine widely scattered subpopulation.
Habitat and ecology: Pelargonium oblongatum grows in a very hot and arid area in the succulent karoo shrubland. In winter the massive leaves of P.oblongatum provide additional cover to small succulents such as Conophytum violaciflorum. The species is not threatened and the population trend is stable.

Description: Pelargonium oblongatum is a very singular geophyte succulent species to 30 cm tall, remarkable for the thick erect fleshy root stock (caudex) which stands several centimetres above the ground and bears leaves before the flowers appear. Like most of the tuberous species the rootstock is well protected by several layers of brown, shell-like skins. The leaves are produced in winter in a neat rosette, fairly close to the ground and scented. The flowers are large with five petals, the two upper petals are yellow or cream with red-purple feathering veins and larger than the three lower ones. The five long filaments which bear orange anthers (the pollen-bearing part of the stamen) curve nicely towards the upper petals, and form a landing pad for its pollinator. Pelargonium oblongatum shares some morphological traits with Pelargonium curviandrum, Pelargonium punctatum and Pelargonium triandrum.
Derivation of specific name: 'Oblongus' (Latin), oblong; apparently refers to the oblong tuber.
Rootstock (caudex): Tuberous, solid, fleshy, oblong vertical, or turnip-shaped attaining 5 cm in width and a length of 15 cm, wholly below ground or (usually) partly exposed above ground level, throwing off thick layers of the outer bark from the upper part and crowned with the remains of old stipules and leaf stalks.
Leaves: In a neat rosette, fairly close to the ground and produced during winter befpre the flowers, rather fleshy, bright green, 3-10 cm long and 2-8 cm broad. Petioles long hairy usually relatively short. Stipules lance-shaped up to 2.5 cm long. Lamina simple, ovate, cordate-ovate, oblong-obovate or orbicular, upper face with long and short glandular hairs and variously covered with coarse hairs, lower face densely covered with short soft patent hairs and glandular hairs. Margin irregularly dentate, or small-lobed , distinctly fringed with hairs.
Inflorescences: Scapes patently hispid, branched. Umbels 4–8(-24)- flowered.
Flowers: with ovato-lanceolate, setose bracts. Calyx tubes remarkably longer than the the lanceolate, acute, membranous edged , very slender and adnate to the slender pedicel, densely covered with hairs. Stamens 5, very long, declinate. Petals broadly obovate pale yellow or cream-coloured the upper 2 (broadly) unguiculate-obovate with purple feather-like veins. Lower 3 petals widely spatulate. The length and comparative breadth of the sepals and petals varies much. Fertile stamens 5, protruding from the corolla, bending upwards, filaments white, of different lengths. Pollen orange.
Blooming season: Spring (mainly from September to November).
History: Pelargonium oblongatum was discovered by Burchell in 1814 and afterwards gathered by Drege in whose collection it was named by E Meyer but not described till taken up by Harvey in the Flora Capensis in 1860.

Cultivation and Propagation: Pelargonium oblongatum grows on winter rain and heads for summer dormancy and this means autumn is the time to encourage sprouting. The growing season in northern hemisphere is from September to March. Paying attention to the particular growing requirement of Pelargonium oblongatum is especially important. The growing season for these plants starts as daylight and temperature decrease; this is usually mid-August. This is when you can increase watering. Pelargonium oblongatum, completely vanish when dormant. They grow through the winter, requiring strong light and light fertilization when watered. If you provide it with the right conditions, it will reward you with its unique shape and size. However, this is a tricky plant that is very particular about its growing conditions and require the right maintenance in order to keep happy. These plants do better in a greenhouse than indoors.
Soil: It does best with a mix that has almost no organic material at all. Perlite can be substituted for pumice, but it tends to rise to the surface of the mixture. It can grows outdoor in sunny, dry, rock crevices (protection against winter wet is required).
Repotting: Avoid to repot frequently. This plant may stay in the same pot for many years.
Fertilization: Be careful not to apply too much fertilizer. Feed it once during the growing season with a fertilizer specifically formulated for cactus and succulents (poor in nitrogen), including all micro nutrients and trace elements diluted to ½ the strength recommended on the label. It thrives in poor soils and need a limited supplies of fertilizer to avoid the plants developing excess vegetation, which is easily attacked by fungal diseases. Ensure a very good ventilation.
Light requirements: Light shade or morning sun in summer (avoid direct sun as it grows wild among rocks and under the shade of other plants) and in summer it need to be kept in a cool area.
Watering: Water from early February to late April, then from early August to late November, at a minimum temperature of +14° C. These plants usually go dormant around April and dormancy can involve loss of all foliage. Cut back watering and stop fertilizing at this time. Keep completely dry in summer and winter, at a minimum temperature of +8° C. A dry dormant periods help keep plant growth from becoming too lush and seem to promote regular blooming.
Hardiness: Protect from frost. Getting too hot in winter can cause plants to return to dormancy.
Pests and diseases: These plants stay mostly pest-free but can be troubled, especially if over-stressed, by mealy bugs and mites.
Reproduction: Seeds. Plant seeds any time of the year, but a autumn sowing of seeds is usually most successful (months of August-November in northern hemisphere). Seeds need cool temperature to sprout. Plant seeds with the tip pressed all the way down and the tall stem sticking up or broken off (either way, it doesn't seem to matter). Keep seeds moist until they germinate, using distilled water. But seeds germinate in spring too. Germination can be very erratic, and can take place over a long period of time so do not throw away the sowing tray as some seeds sprout after being in the pot for more then a year (and seem to need the heat of summer in order to break dormancy). Seedlings have pretty good initial growth, reaching a handleable size in a year, but seems best to grow them on for two years before to try to transplant them. There is a way of overcoming the long time periods and the inhibitors; that is, by scarifying the seeds.