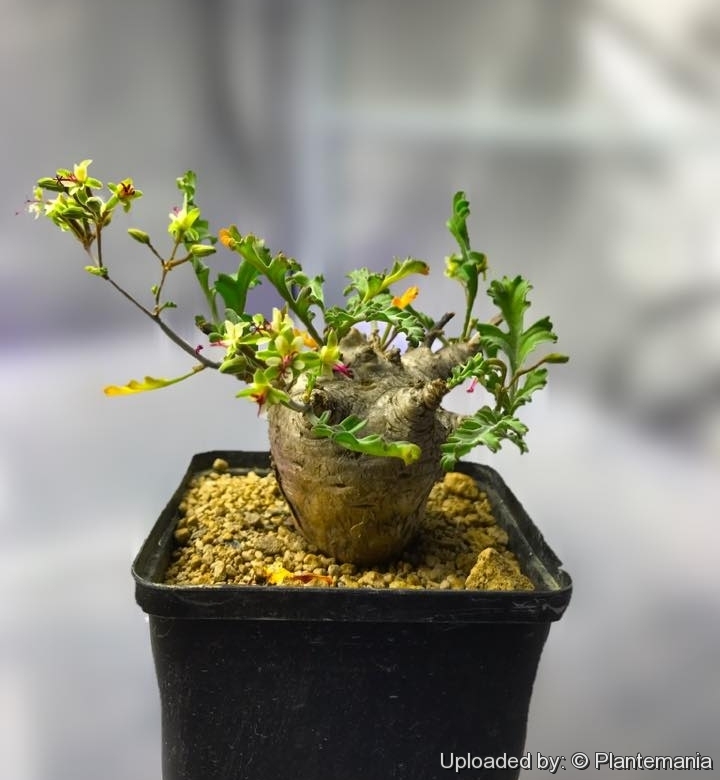 Description: Pelargonium carnosum is a deciduous, fleshy-stalked, shrubby pelargonium up to 60 cm tall with a woody, swollen, tuber-like rootstock. It has a feathery foliage similar to some of the erodiums. It is dormant or semi-dormant in summer.
Stem: Thick grey-green, highly succulent, gibbose knotted) 4 to 5 cm thick. Joints few, short, erect and rugged with only few apical leaves.
Leaves: On long mid-ribs are pinnatifid, laciniate (ferny) soft, downy and somewhat fleshy too.
Flowers: The inflorescence is a long-pedunculate, many-flowered umbel. The flowers are tiny, creamy pink or pink-crimson with some markings. Petals are linear. 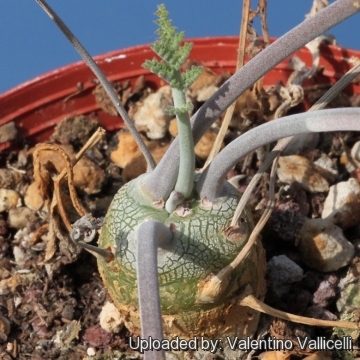 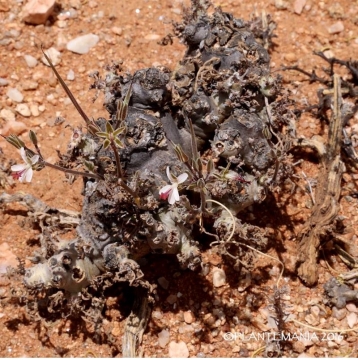 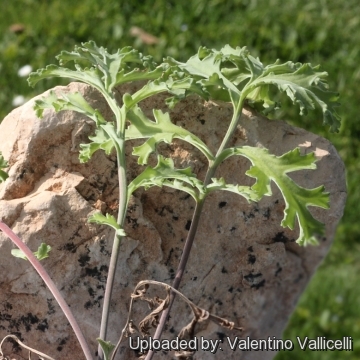 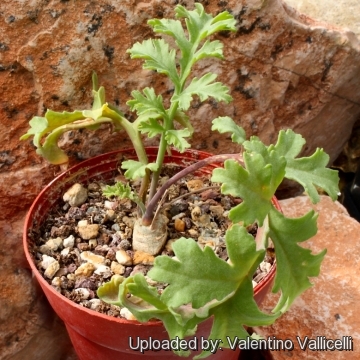 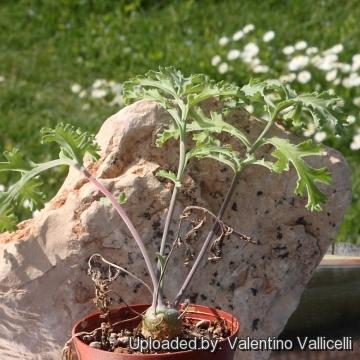 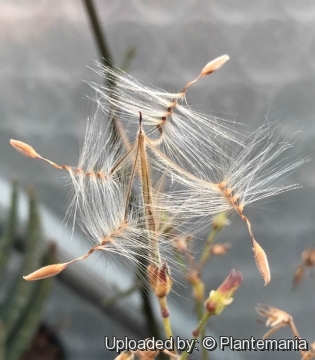 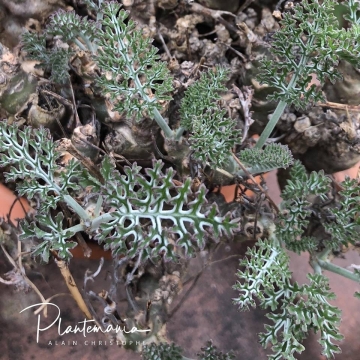 Cultivation and Propagation: Pelargonium carnosum grows on winter rain and heads for summer dormancy. The growing season in northern hemisphere is from September to March. Paying attention to the particular growing requirement of Pelargonium carnosum is especially important. If you provide it with the right conditions, it will reward you with its unique shape and size. However, this is a tricky plant that is very particular about its growing conditions and require the right maintenance in order to keep happy.
Soil: It does best with a mix that has almost no organic material at all. Perlite can be substituted for pumice, but it tends to rise to the surface of the mixture. It can grows outdoor in sunny, dry, rock crevices (protection against winter wet is required).
Repotting: Avoid to repot frequently. This plant may stay in the same pot for many years.
Fertilization: Be careful not to apply too much fertilizer. Feed it once during the growing season with a fertilizer specifically formulated for cactus and succulents (poor in nitrogen), including all micro nutrients and trace elements diluted to ½ the strength recommended on the label. It thrives in poor soils and need a limited supplies of fertilizer to avoid the plants developing excess vegetation, which is easily attacked by fungal diseases. Ensure a very good ventilation.
Watering: Water from early February to late April, then from early August to late November, at a minimum temperature of +14° C. Keep completely dry in summer and winter, at a minimum temperature of +8° C. Pelargonium carnosum in cultivation is usually so overwatered and overfertilized that it is hardly recognizable as the species that it is. Correctly grown, this is a beautiful, compact and dense plant.
Hardiness: Protect from frost.
Exposure: Light shade or morning sun in summer (avoid direct sun as it grows wild among rocks and under the shade of other plants) and in summer it need to be kept in a cool area.
Reproduction: There are two main ways to propagate members of the genus Pelargonium. Plant seeds any time of the year, but a spring or autumn sowing of seeds is usually most successful. Seeds need cool temperature to sprout. Rooting cuttings of stems is another method. Germination can be very erratic, and can take place over a long period of time. There is a way of overcoming the long time periods and the inhibitors; that is, by scarifying the seeds.