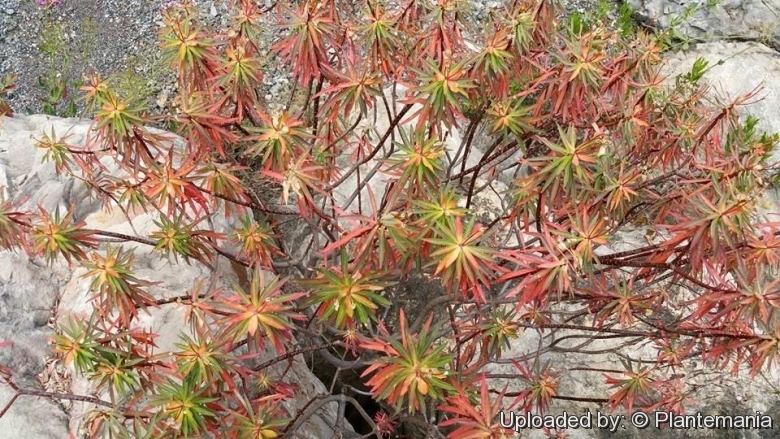 Esula dendroides (Euphorbia dendroides) Photo by: © Plantemania
it is a hemispherical semi-succulent shrub that can easily be recognized from long distance by its reddish branches.

Origin and Habitat: Euphorbia dendroides is common in the Mediterranean coastal regions, from the Iberian Peninsula to Egypt ( not in Slovenia, Bosnia, Cyprus, Syria, Lebanon and Morocco). It has been introduced to other countries out of its original range as an ornamental tree. It naturalised in Australia and Southern part of California.
Altitude range: 0-600 meters above sea level (occasionally up to 900 meters).
Habitat and ecology: Euphorbia dendroides grows in exposed, open terrain, on rocky (mostly calcareous) ground. This plant is sensitive to frost, so it only grows on protected and sunny mountainsides in hilly areas near the sea. They grow quite large and whole hillsides are often covered with them. When living conditions become critical for the hot and dry summers, plants enter a resting phase, including the fall of the leaves. It usually reproduces by anemophilous pollination (pollen dispersed by wind), but there are also documented cases of zoogamic pollination by insects, as well as by lizards, like the Balearic lizard Podarcis lilfordi, who visit Euphorbia dendroides to feed its highly concentrated nectar. The dissemination is guaranteed by an explosive opening mechanism of the fruit that projects the seeds at a certain distance from the parent plant. Seed dispersal is both direct and by ants which are attracted by the albuminous and fatty caruncle (fleshy structure attached to the seed).

Description: The Tree Spurge (Euphorbia dendroides) is a much-branched woody shrubs with red bark, hemispherical, up to 2 m tall and wide, with basal shoot branching mostly dichotomously, and white milky juice (or small tree up to 3 m tall ). The very original growth form of E. dendroides is named "round-topped tree". The spherical form is the result of a peculiar forked branching growth, after the first development of flowers the growing apex is replaced by a shoot innovation with generally two lateral buds. The leaves are formed in groups at the ends of the branches. Each adult plant produces hundreds to thousands of inforescences (cyathia) grouped in clusters of one to 6 (rarely six) cyathia (flowers) subtended by yellowish petal-like bracts. It is the largest and the only arborescent European euphorbia.
Derivation of specific name: The botanical name describe the tree-shaped growth form of the species.
Branches. Weakly succulent, soon becoming woody and corky at the base, mostly dichotomically or trichotomically branching. The epidermis on higher branches, is greenish glaucous or pinkish with clear scars left by the fallen leaves.
Leaves: Alternate, clustered at end of branches somewhat spaced out. Oblong-lanceolate, entire, attenuate at the base, and somewhat mucronate at the tip, rounded or sub-truncate, up to 6.5(-7) cm long and 8 mm wide, sessile, light green, glabrous and with single vein, eventually deciduous in case of drought. Lower leaves pendulous and often reddish, upper ones semi-erect and those under the inflorescence erect on the young branches. In the spring, at the end of the flowering period, the leaves take on a reddish colour by producing antocyanin pigments. During the rather dry summer the plants are almost leafless to limit transpiration and so better combat dehydration in summer. New leaves start to develop in the autumn and grows predominantly in the rainy winter.
Inflorescences: Terminal, umbellate, with 5-8(-15) bifurcate, rays to 5 cm long. Bracts ovate, similar to flowers to 10 x 15 mm, yellowish.
Cyathia: Sub-sessile egg-shaped about 5 mm in size and yellowish-green in colour. Each cyathium consists of one female flower, with a three-lobed ovary, and several - up to six - male flowers, surrounded by round glands. From the ovary (female flower) protrude 3 forked stigmas. Nectar-gland almost circular, more or less lobed (2-horned) on the outside, with numerous stamens inside. The glands are initially yellow and turn red with time. These glands produce copious and highly concentrated nectar. The main flowering season is the beginning of spring (The fowering peak is usually in mid-March and lasts 2-3 weeks). During the flowering period (November-April), a second blossom of cyathia may emerge at each side of the older cyathia. The species is self-compatible, but there is no autogamy.
Fruits (capsules): Smooth, grey-green, deeply three-lobed, 5-6 x 7 mm, dehiscent, containing 3 seeds.
Seeds; Ovoid, laterally compressed, to 3 mm, smooth , opaque brown or greyish-black, smooth, carrying a rounded caruncle.
Chromosome number: 2n = 18 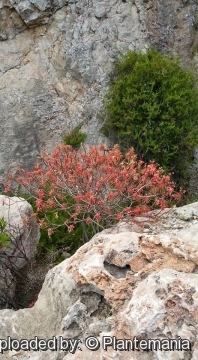 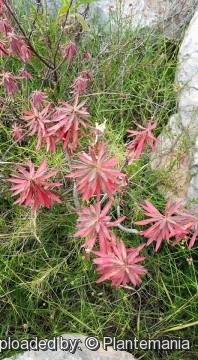 Cultivation and Propagation: Euphorbia dendroides relatively an easy to grow plant for pot culture. It grows well in a very draining mineral potting substrate, but it isn't picky about soil. Outdoors it requires a deep sandy soil. It slowly grows into a large, many stemmed specimen.
Water requirements: The area where this plant is native receives rains mainly in winter, so it can be watered moderately from autumn to spring (except in the coldest month of the winter, as it rot easily, especially if over-wet). During the summer, they lose their leaves and enter in a rest phase, in this period diminish waterings to one at a month.
Hardiness: In winter, keep it dry above 4°C. Mature healthy plants are tough and can also be grown outside in frost free areas, but when left out it is more sensitive to frost.
Exposure: They do need a lot of light to keep their compact growth-form. The plants that are not kept in full sun grow faster, but became untidy and may need support as they get larger, or branches fall off. Sometimes, in really hot full sun all day long, a plant will bleach out a bit.
Propagation. Seed and cuttings.