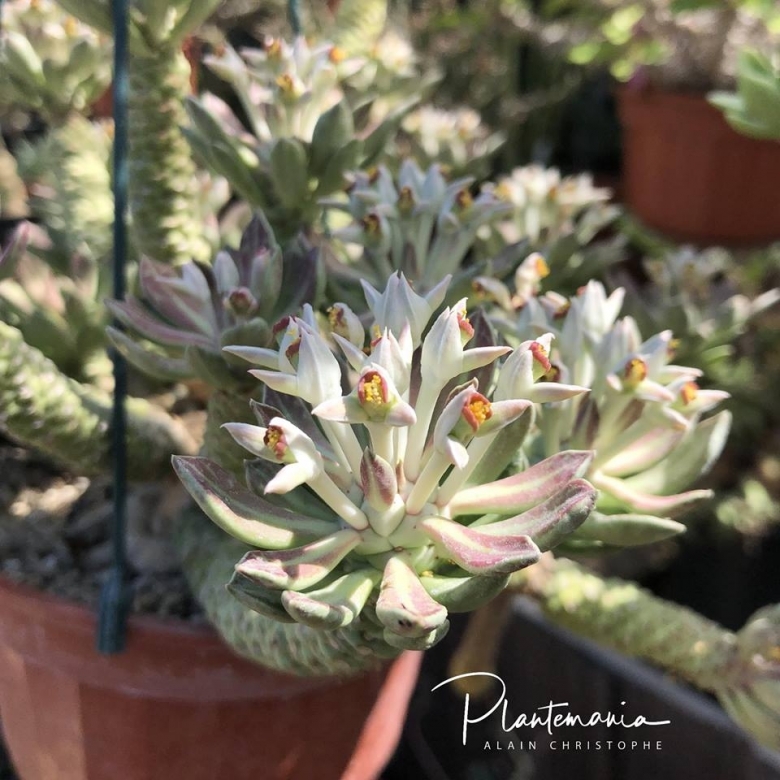 Description: Monadenium stapelioides (syn: Euphorbia neostapelioides) is a glabrous succulent perennial herb, branching at the base of a large fleshy rootstock and forming a domed cushion to 60 cm in diameter. This beautiful Monadenium produces many multicolored stems. The stems tend to flop over and hang with this species. The flowers have a bract cup that is white or light pink, they are small but interesting and showy when produced in large numbers. Leaves are produced at the growing point, but they last only one season. The leaves are succulent and shot through with purple-pink streaks through the light green background, making this a beautiful species. There is considerable variability in the diameter of the stems, number and size of tubercles, shape of leaves, length of inflorescences. This variability is so completely intergraded that difficult to establish varieties; one geographically limited form (forma congestum) combines thick stems and very numerous, small tubercles with lanceolate to almost subulate, terminally crowded leaves.
Rootstock (caudex): Fleshy perennial, from which emerges several shoots.
Stems (branches): Numerous, cylindrical and generally unbranched, mostly from the base of the rootstock, erect or decumbent, dark green, glabrous, 2-15(-30) cm long, 6-20(-40) mm thick, covered with prominent upward-pointing, spirally arranged tubercles (succulent podaria) in usually 5 o loosely spiralled series. Each tubercle is rhomboid or hexagonal, 1-2 mm long, with the leaves at the apices 1-4 mm. from the axils. The tubercles are tightly spiralled only on dwarfed growth in exposed situations. Stems usually erect or semi-erect, cylindrical and generally unbranched. All stems have spirally arranged tubercles and leaf scar.
Leaves: Sessile, on the apex of the tubercles near near to tip of branches. Blades very fleshy, obovate to oblanceolate (tapering towards the base), 3-10(-50) mm long, 3-15(-20) mm broad, dark green, with purple-pink streaks through the light green background, apex acute, apiculate, apparently longitudinally folded inward, with a prominent midrib beneath, fleshy, glabrous, very minutely scabrous along the margins, deciduous. Stipules none or rarely evident as minute thorns on young growth around the calloused leaf-scar. Leaves near to apex, obovate and tapering towards the base.
Inflorescences (cymes): Several 1-forked, arising in the axils of the tubercles at the apex of the stems, 8-10(-15) mm long, with 3 omvolucres (flowers); peduncles 10-15 mm long, glabrous. Bract-cup (cyathophylls) greenish white flushed with pink, distinctly longer than the involucre 5-7 mm long and 6 mm wide, oblique, with 2 short rounded apiculate lobes and 2-keeled down the back, with the margins slightly overlapping in front at the base, not undulate, glabrous.
Cyathia (flowers): 4-5-5 mm long, 4 mm in diameter, with cup-shaped involucres, somewhat urceolate, slightly inflated below and constricted at the base of the erect truncate rim or gland. Glandular rim 2.5 mm. high, edged with dull red; lobes rounded, ca. 1.2 x 1.2 mm. Male flowers: bracteoles laciniate, pubendous; stamens 4.3 mm Long. Female flower: Ovary recurved, 3-angled, very minutely papillate, ca.3.5 mm in diameter; styles 2.5 mm long, with thickened rugulose distinctly bifid apices
Fruits (capsules): Exserted on a stout pedicel ca. 5 mm. long, sharply 3-lobed with truncate base, 5 x 5 mm, minutely papillose and with a pair of very narrow fleshy and shallowly toothed ridges along each angle.
Seeds: 3.5 mm long, 2.8 mm wide, oblong, 4-angled, with truncate base, pale grey, minutely and shallowly tuberculate.

Subspecies, varieties, forms and cultivars of plants belonging to the Euphorbia succulenta group 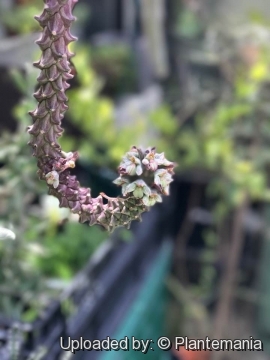 Cultivation and Propagation: Whether all-green, or variegated, these succulents are easy to grow, give plenty of sun outside in winter, morning sun only outside in summer, and full sun if grown indoors. Give water only when quite dry during the growing season. Barely water them in winter when they enter semi-dormancy.