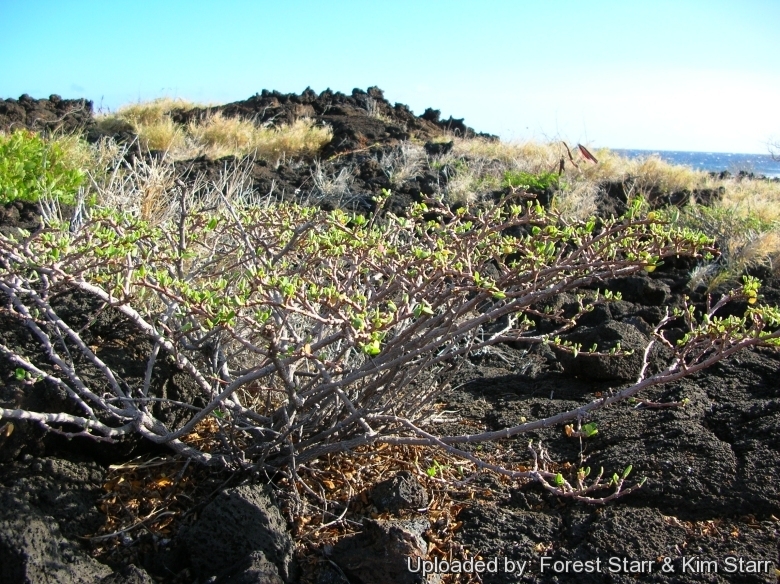 Origin and Habitat: Euphorbia celastroides is endemic to all the main Hawaiian Islands (Kauaʻi, Niʻihau, and Nīhoa). It is locally aboundant on low elevations.
Altitudinal range: This species is found from the coast to upland mesic forest.
Habitat and ecology: Euphorbia celastroides is tolerant of drought and grows in dry, scrubby areas and sparsely wooded slopes, inland as well coastal often on calcareous soils. On Nīhoa it is a common component of the vegetation found on ledges and grassy slopes. This variety forms dense stands alone or mixed with pōpolo (Solanum nelsonii) and ʻilima (Sida fallax). The majority of the seabird Christmas shearwater (Puffinus nativitatis) that breed on Nīhoa, nest in ʻakoko thickets or the tufts of the grass kāwelu (Eragrostis variabilis). Due to its endemic nature, it is very vulnerable to human threats. Two examples of such threats are four-wheeled vehicles (which crush the plant) and introduced species (which compete for resources). One variety, Euphorbia celastroides var. kaenana, found at Ka'ena Point, Oahu, is federally listed as endangered.

Description: Euphorbia celastroides, previously also known as Chamaesyce celastroides, is a species of spurge that grows as a medium-sized evergreen shrub or small tree reaching at most 1-2 m in height and diameter. This species develops into a round-shape shrub, both glabrous and pubescent forms are known. While the flowers are not showy, the bright pinkish to red fruits can be uniquely appealing en masse. It is by far the most variable and widespread of all Hawaiian Chamaesyce and there are at least 30 described varieties that in all probability they can all be included within the variation of the one species. The erectly held capsules distinguish it from all other Hawaian Chamaesyce except Chamaesyce herbstii and Chamaesyce rockii, which have distinctive large fruit.
Euphorbia celastroides var. celastroides The leaves are of this variety are glabrous (without hairs) and narrow.
Stems: Slightly succulent adapted to store water, forming a loosely branching short trunk. The secondary or young branches are stiff, with short internodes. A milky, sticky latex naturally oozes from wounds.
Leaves: Small, distichous (growing in two vertical rows) and may have a glaucous coating. Often the leaves in the summer assume a red-violet colouring. It does not lose its leaves in the winter, due to the warm climate of its range, but may shed the leaves in dry, hot weather. Damaged or old leaves turn a blood red as they die.
Flowers (cyathia): Small, brownish to greenish-white, not showy, a few millimeters in diameter, located in short or open-branched cymes, or ungrouped in leaf axils. Female cyathia have a three-part pistil over a three-part ovary, usually producing three (or sometimes more) seeds. The pungent flowers of ʻakoko have been described as smelling like bad breath.
Fruit: Green or reddish-brown or pink, rounded 2 to 4 mm long. Within each capsule are two or three small seeds.
Phenology: Euphorbia celastroides produces flower and fruit repeatedly throughout the year.
Seeds: Grey-brown seeds 0.5 to 2.5 mm long.

Notes: The genus Chamaesyce (now lumped in Euphorbia) is represented principally by herbaceous species in continental source areas, but is mostly represented by woody or near woody species in sixteen endemic species of Hawaiian spurge or 'akoko (Chamaesyce spp.) all derived from one or, less likely, two colonizers. The genus Chamaesyce shows the progression from herb to tree with such species as Chamaesyce degeneri (a low herbaceous mat growing in the strand zone), Chamaesyce celastroides and Chamaesyce multiformis that exhibit growth forms ranging from a large but low, quite-tangled, mat of branches; through a somewhat spreading shrub; to a multitrunked small tree to Chamaesyce rockii and Chamaesyce olowaluana that truly qualifies as a tree, growing to 9 m high and occasionally reaching 30 cm in trunk diameter. Also definitely treelike is Chamaesyce herbstii, reaching about 8 m in height. There are at least several reasons for the preponderance of woodiness in the native Hawaiian flora. One of them might be the general tendency of many groups of plants to continue to grow in a climate such as Hawaii islands where there are no winters to bring things to a halt. Another might be, as mentioned above, that whereas "weedy" plants may have been favoured as colonists, there would have been strong tendencies to evolve tree-like species that would be better able to compete for light and space in the forests, particularly the wet forests, of the evolving Hawaiian landscapes. [S. H. Sohmer, R. Gustafson 1987; Alan C. Ziegler 2002] 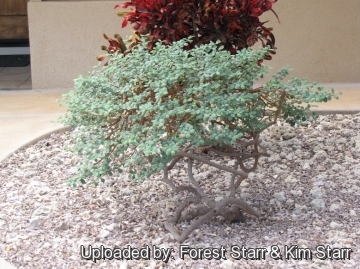 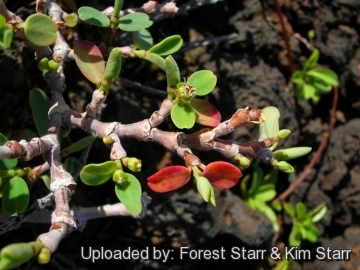 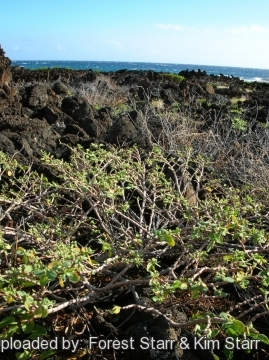 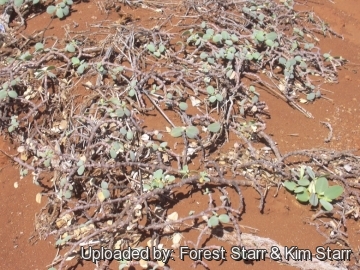 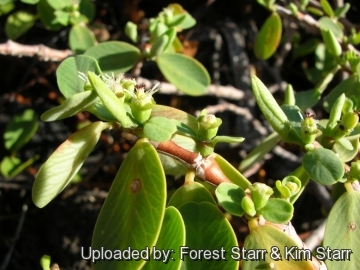 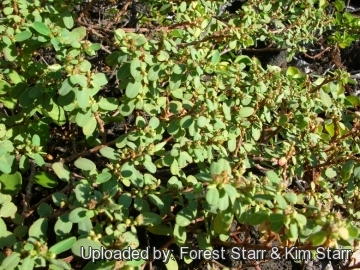 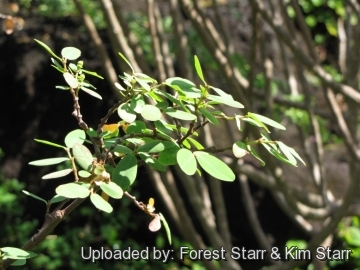 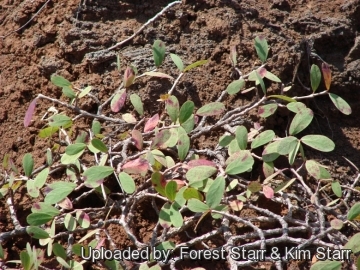 Cultivation and Propagation: Euphorbia celastroides or akoko is an attractive tropical species that requires temperatures of 15 °C and light shade. This plant develops in a fashion similar to a shrub and is tolerant of heat and drought. Though this variety is seldom seen in cultivation, it is a beautiful addition to the landscape and rather easy to grow.
Growth rate: They can grow to half a meter a year and flowering and fruiting in optimal conditions.
Potting medium: A gritty, very free-draining compost is suitable, and clay pots help the plants to dry out between watering. Re-pot every 2-3 years.
Fertilization: Akoko respond well to liquid fertilizer (once every one to two months).
Waterings: They like only a short winter's rest and should be kept almost completely dry during the winter months. If the soil is allowed to be dry for too long root loss could follow but equally the same result would occur if the plants are both wet and cold. From March onwards the plant will begin to grow and watering should be increased gradually until late May when the plant should be in full growth. Water regularly during the summer so long as the plant pot is allowed to drain and not sit in a tray of water. During hot weather you may need to water the plants more frequently so long as the plant is actively growing. From late September watering should be reduced to force the plant to go in to a state of semi dormancy, by October you should be back in to the winter watering regime.
Maintenance: This species do tend to get sort of leggy, which is particularly a problem if grown as a potted plant, and pruning is sometime necessary to shape. Repeatedly prunings also help to encourage new growth.
Hardiness: This spurge is tender, hates prolonged cool and is suited for tropical or subtropical climates, it is killed at 0°C or colder for any appreciable length of time, but may survive cold weather even if it end up getting nearly defoliated each winter. (USDA Zones 10a-12b) Any temps below 4° C degrees call for protection for this plant. Seedling growth arrests below 15°C.
Wind hardiness: It is very tolerant and even survives to strong hurricane wind with minimal damages, but will grow better with slow wind.
Salt tolerance: It is tolerant of coastal and beach exposure, as well as salt spray.
Landscape Use: Accent. Hedges.
Hawaiian Uses: The milky sap was one ingredient of the paint used on canoe hulls.
Pest and diseases: They are susceptible to fungal diseases. Wet soil quickly causes root and stem rot, especially during winter months. Pests of akoko include whitefly, scale insects, and mealybugs. Often the scale in-sects and mealybugs are brought in and protected by ants.
Propagation: Seeds or cuttings. It is best to collect seed just before or just after the capsules split open to be sure to have fresh but mature seeds. Because of the small size of the seedlings, place little or no cover over the seedbed. Take extra care to avoid letting the seedbed dry out. The seeds will begin sprouting in one to two weeks (sometimes take longer). Let the seedlings grow to about 5 cm in height before separating and transplanting to individual containers. You can also propagateEuphorbia celastroides by stem tip cuttings. Take cuttings about 10 cm in length from actively growing tips with mostly green wood. Rooting time is variable as long as two to three months. After root growth and new stem growth are obvious, transfer the new plant to a standard potting mix.