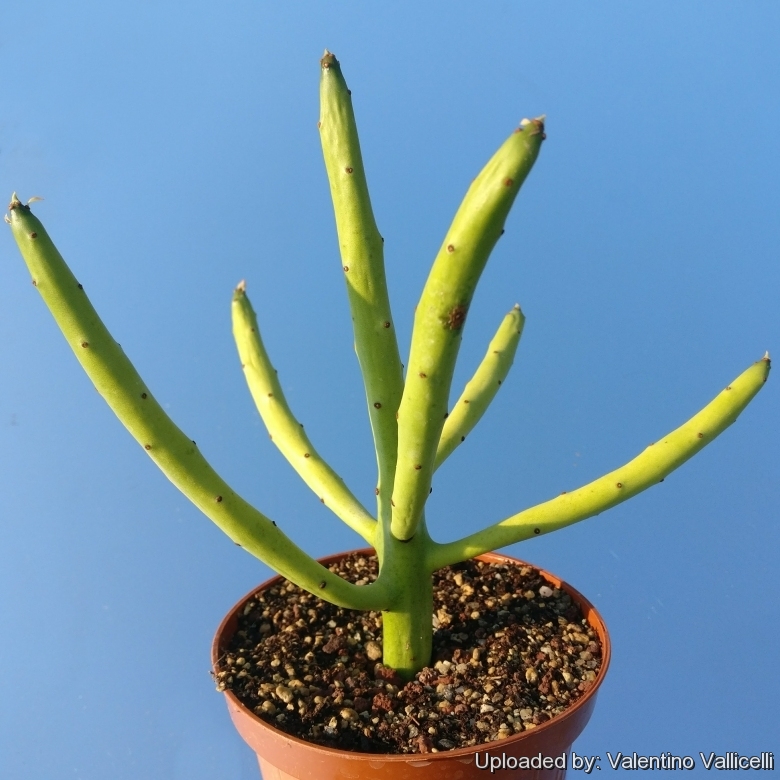 Origin and Habitat: South-west Madagascar, extending towards the central high-plateau: Androy; Andrahomana; Ambovombe (Tsimananada). Extent of occurrence 179,422 km² with an area of occupancy of 148,404 km². It has been recorded at least from 44 localities and comprises of 15 subpopulations
Altitude: 0-1000 metres above sea level.
Habitat and Ecology: Euphorbia alluaudii is found in subhumid, dry or subarid south-western bush areas of Madagascar, as well as the inselbergs and rock faces of the southern central high-plateau. Plants growing in the south-west don’t seem to be restricted by the nature of the soil whereas individuals from the high-plateau require well drained rock outcrops to grow, greatly limiting potential localities. This species is common throughout its range. The area is very rich in succulent plants, some of which are endemic to the region. They include Pachypodium geayi, Alluaudia ascendens, Uncarina abbreviata and Delomlx spp. Habitat degradation, fire, habitat clearing for charcoal, mining for the high-plateau specimens. When old enough this species is possibly used for charcoal.

Description: Euphorbia alluaudii (Cat Tails Euphorbia) is a dioecious (exceptionnaly monoecious) succulent shrub or small tree made up of clusters of cylindrical, jointed, spineless branches. Most of its branches rise erectly from the base and then arch outwards to form a mass as wide as tall. It can ultimately reach to 4(-6) metres though in containers it more commonly grows to a modest 1.2-1.8 metres tall. At the tips of the stems, small yellow flowers will appear in the spring and summer and the developing fruit is red and somewhat heartshaped. Subspecies onoclada may be a good species (Euphorbia oncoclada), as originally described by Drake. Euphorbia leucodendron is a synonym of the typical subspecies.
Stems: Narrow, erect to procumbent, succulent, pale green, cylindrical and jointed. The joints are dotted with brown marks where the leaves were previously attached and also have some relatively large stoma or pores that give them a somewhat speckled appearance. Bark grey, smooth, much delayed. Massive quantities of sap are poured out when a stem is cut. The sap quickly seals and protects the cut surface making subsequent fungal growth less likely.
Leaves: Tiny, green, reduced to scales at near the growing tips on new branches, but they quickly fall off. The stipules form a black glandular ring around the leaf insertion.
Inflorescence: Lateral at the apex of the twigs, cyathophylls identical to incyathescence bracts.
Flowers (cyathia): Always unisexual, dichasial branching of incyathescences (male cyathia are usually more numerous). Nectar glands 5.
Fruits (Capsules): Dehiscent, always erect, trilocular, green thin and smooth, with ridges tinted with purple, 3 seeds per capsule.
Seeds: Testa smooth, ecarunculate.
Similar species: This unusual plant is one of the succulent euphorbias sometimes called "coraliform" or "coraliformes" types, with common names such as Stick Plant, Stick Cactus. It is somewhat similar to Euphorbia tirucalli, but with a bit thicker, more erect, less bushy branches and much slower to form a tree shape.

Subspecies, varieties, forms and cultivars of plants belonging to the Euphorbia alluaudii group

Cultivation and Propagation: It is an easy species to grow that is suited for any well drained soil in full sun. But young plant are happy growing indoors, where they can easily reach the ceiling. Give the plant an airy growing medium which mainly consists of non organic material such us clay, pumice, lava grit, and only a little peat or leaf-mould. Water regularly during the active growing season from March to September. No water should ever be allowed to stand around the roots. Keep almost completely dry in winter. It is a moderately fast grower, and will quickly become large landscape masterpieces in just 3-5 years. It is a relatively fast growing and long lived plant and once established, it will be content in its position and with its soil for years.
Fertilization: Need a perfect fertilizer diet in summer. Use preferably a cacti and succulents fertilizer with high potassium content including all micro nutrients and trace elements or slow release fertilizer.
Exposure: This plant has an excellent heat tolerance, and need full sun to light shade exposures, but can tolerate shade. However shade grown plants will tend to produce fewer, and etiolated growth. The colour of this plant is much more marked if grown in full sun. But if it is possible to keep the growth of this species compact, with denser, shorter stems such plants can be outright attractive.
Watering: Water regularly during the active growing season. No water should ever be allowed to stand around the roots. Keep almost completely dry in winter. Care must be given in watering, keeping them warm and wet while growing, and cooler and dry when dormant.
Hardiness: Frost tender, it can withstand temperatures only above 2º C. However it can be difficult to get it to look its best without a good amount of heat and sun and so it is only really suited to the tropics (USDA Zones 10-12). It can be grown outdoors in the summer months to benefit from direct exposure to light, and especially exposure to high summer temperatures. Protection in a warm greenhouse in the middle of the winter will greatly increase the survival rate.
Rot: Rot it is only a minor problem with Euphorbias if the plants are watered and “aired” correctly. If they are not, fungicides won't help all that much. It is very unlikely to lose this plant from root rot from excessive water.
Manteinance: Re-pot every two years. It like quite small pots, repot in early spring. It can be pruned for shape and branching and trim off the dead 'arms'.
Known hazards: All parts of Euphorbia ooze a milky sap when damaged or cut. Contact with this sap may cause dermatitis in some people, and in the eyes the sap can cause temporary blindness which may last for several days.
Uses: It is an excellent choice to have in a rock garden. They are strong architectural plants that make a definite statement.
Traditional uses: Resin from the stem is used for low-grade rubber, but is said to contain more resin than caoutchouc.
Propagation: The plant can be reproduced by seeds or cuttings. Seeds can only be harvested when the capsule is light brown in colour. Due to the explosive nature of the seeds, one should place cottonwool over the seed capsules to stop them being blasted into the surrounding area. The soft cottonwool will effectively trap any seeds. The seed will loose viability in storage, and may not be viable the following year, so the seed should be planted as soon after harvesting as possible. Use a well-drained sowing medium of sandy loam with very well-rotted compost, and preferably sieved river sand to cover the seed. The ideal size of the sand grains should be 1 mm. Germination usually occurs within about a week or two. Cuttings are relatively easy. If you remove an offset, remember to let it dry for some days, letting the wound heal (cuttings planted too soon easily rot before they can grow roots). Lay it on the soil and insert the stem end partially into the substrate. Try to keep the cutting somewhat upright so that the roots are able to grow downward. It is better to wash the cut to remove the latex. The newly planted stems take a few weeks to establish, and then start growing. The best time to strike cuttings is spring.