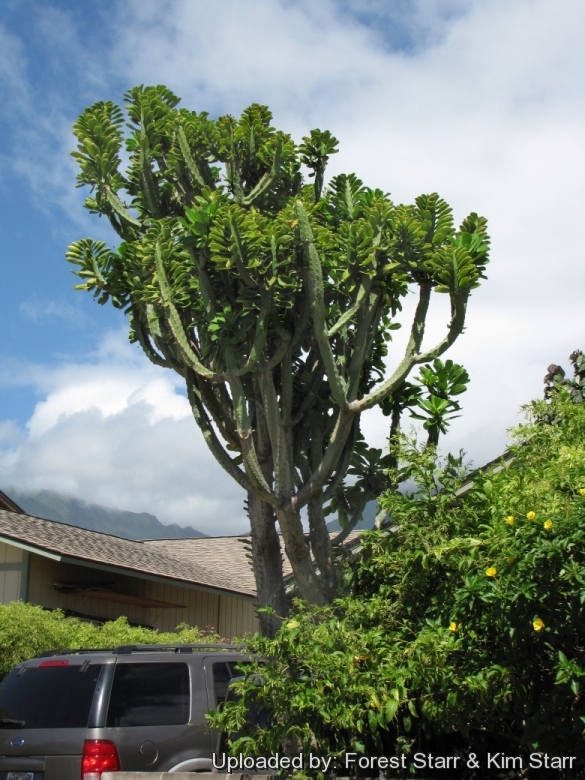 Origin and Habitat: It is probably of Central India, Orissa and South India, but nowadays cultivated and naturaized in West Bengal, Sri Lanka, Burma (Myanmar), Thailand and throughout the Malesian region except Borneo. It is also cultivated as an ornamental plant in other tropical regions.
Habitat and ecology: Common in dry rocky ground, often cultivated for hedges in villages.

Description: Euphorbia neriifolia, the "oleander-leafed spurge," is a large much branched xerophytic fleshy shrub, which sometimes grows into a small tree 2-6 metres, or more in height with rounded branches.
Stem: Main trunk and larger branches are round and terete, the younger branchlets somewhat verticillate, without articulations, fleshy, cactus-like, swirled, light-green, glabrous, 8-30(-40) mm thick, often leafless, and spine shield in 5 distinct rows on more or less distinct angles (not winged) which are are visible for a long time.
Stipular spines: Short (1-4 mm long), paired sharp, persistent, greyish-brown to black, from low conical truncate distant spirally arranged tubercles 2-5 mm hight and 2-3 cm apart.
Leaves: Towards the end of branches, fleshy, alternate, subsessile, ovate, oblong or spathulate (5-)10-18(-30) cm long by (1.5-)3-4(-7.5) cm, base attenuate, margins entire, apex rounded and hairless. Leaves are deciduous, persistent during the vegetation period and falling in the late summer/ fall.
Inflorescences: 3 to 7 flowered cymes or panicles appearing laterally in the axils of the upper leaves on short, rigid and forked peduncles.
Flowers (Cyathia): Flattened-globose 1.5-2 mm x 4-5 mm, reddish, prominent in groups of tree, the central one subsessile, the lateral ones with a peduncle of 6-7 mm, cyathial glands 5 oblong, 1-3 mm broad. Corolla absent but the involucre has two nearly round to ovate, bright red bracts 3-7 mm long.
Fruit (capsule): 3-lobed, smooth 10-12 mm in diameter.
Phenology: Flower and fruits in February — March.
Related species: It is very similar to Euphorbia nivulia, from which it differs chiefly in the shorter stature, the 5-angled branches and the more narrowly-oblanceolate acute leaves up to 30 cm long.

Subspecies, varieties, forms and cultivars of plants belonging to the Euphorbia neriifolia group 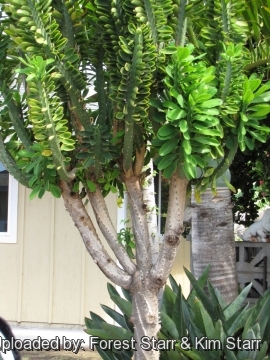 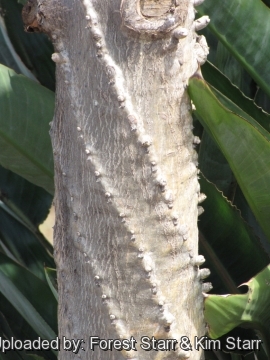 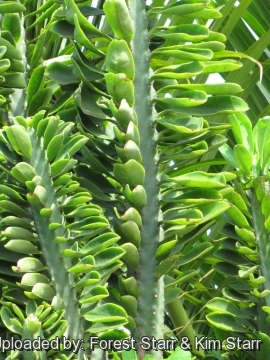 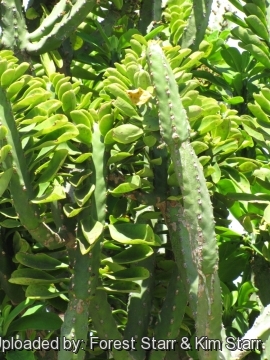 Cultivation and Propagation: Euphorbia neriifolia is an easy species to grow that is suited for any well drained soil in full sun. It needs no maintenance. But young plant are happy growing indoors, where they can easily reach the ceiling.
It is more commonly sold as crests that tend to stay leafier longer, but normal forms are ornamental as well and good landscaping Euphorbias for smaller gardens.
Growing rate: It is a moderately fast grower, and will quickly become large landscape masterpieces in just 3-5 years. It is a long lived plant and once established, it will be content in its position and with its soil for years. Only downside is from strong winds... best to plant in such a location where winds are not a big issue.
Soils: It grows well when in very draining soils when there is a layer of brick and charcoal pieces, on top of which sandy loam soil is spread. In pots give the plant an airy growing medium which mainly consists of non organic material such us clay, pumice, lava grit, and only a little peat or leaf-mould.
Repotting: It like quite small pots, repott in very later winter, early spring.
Watering: Water regularly during the active growing season from March to September. No water should ever be allowed to stand around the roots. Keep almost completely dry in winter.
Light: It can tolerate moderate shade, and a plant that has been growing in shade should be slowly hardened off before placing it in full sun as the plant will be severely scorched if moved too suddenly from shade into sun.
Hardiness: Considered frost tender like all Indian Euphorbias, but surprisingly cold hardy outdoors and also very sun hardy for a crested plant.
It likes warmth (recommended minimum winter temperature 10° C) however plants kept perfectly dry can can survive low temperatures, approx. 0° C, but for safe cultivation it is best to avoid freezing temperatures. Never let the roots chill.
Maintenance: Can be pruned for shape and branching.
Plant Pests: Prone to mealy bugs and rarely scale.
Propagation: It is easy to propagate from seed or vegetatively in late spring to summer, just take a cutting of the plant let it dry for 1 or 2 weeks and stuff it in the ground (preferably dry, loose, extremely well draining soil). Cuttings will take root in a minimum temperature of 20° C (but better in hot weather).
Warning: All Euphorbias contain a white sap that can be irritating to eyes and mucous membranes. If contact is made with this white sap, take care to not touch face or eyes before washing hands with soap and water.
Uses:
1) Ornamental: The plant is used in parks and gardens for ornamentals and also for protective hedges, due to the fragility of its branches together with the well known skin irritancy of its latex. It can also be kept as an indoor ornamental plant.
2) Traditional medicine: Parts used Latex from heated leaves relieves earache. Latex of the root purgative, diuretic, vermifuge and treat asthma. Euphorbia neriifolia is used in Ayurvedic medicine.
3) Other uses: It is utilized as fuel-wood after cutting and drying. The dried stalks are the cheapest of firewoods. It is commercially farmed for the latex and other chemicals.