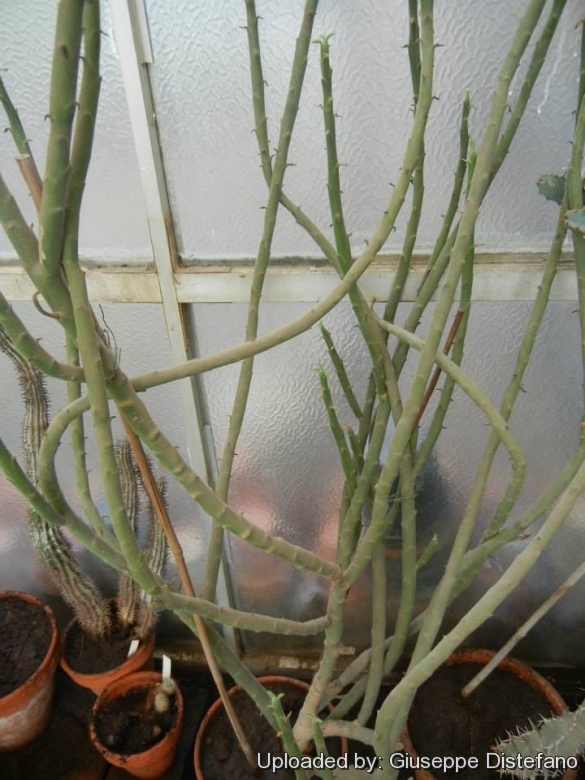 Origin and Habitat: Euphorbia dregeana extends over wide areas of arid country from Tschaukaib in Namibia to the Richtersveld, Republic of South Africa (Northern Cape) and as far south as Komaggas in Namaqualand.
Habitat and ecology: It grows in rocky slopes on quartzitic, sandstone and gravel under a shallow reddish sandy-loamy topsoil, covering large areas of country in leaf succulent dwarf shrubland (Succulent Karoo). Species are mainly leaf succulent Aizoaceae, while larger plants of Aloe dichotoma, Aloe ramosissima, Euphorbia virosa, Sarcocaulon Burmanni, and Tylecodon paniculatum are prominent. Leaves may be formed only after good rains and be shed as soon as conditions become unfavourable. The the haustoria (the root of a parasitic plant )of the holoparasite Hydnora visseri (Hydnoraceae) are often found growing in rows attached to stems of Euphorbia dregeana. Another unusual parasitic plant, Hydnora triceps traverses the soil to parasitize its exclusive host, Euphorbia dregeana. The flowers of H. triceps apparently develop only underground and do not emerge from the soil.

Description: Euphorbia dregeana is a finger-like succulent branching much at the base and above into a multitude of erect cylindrical green stems, radiating out to form a rounded bush 90-200 cm high and as much or more in diameter. The smooth, whitish-green stems topped with umbels of flowers make it an attractive plant. The flowers are yellow with two yellowish-green rounded petal-like lobes encircling the emerging six-sectioned seed capsule. It is the tallest and largest of the narrow-stemmed South African shrubby species with terete branches. The plant exudes the characteristic Euphorbia white latex, sometimes called wolves’ milk.
Stems: Spineless, smooth, cylindrical. Main stems 2-7,5 cm thick at the base, erect, branching; flowering branches terete, alternate, cylindric, 8-50 mm thick, with prominent markings all the way up where the small and short-lived leaves had fallen, very minutely puberulous on the young parts, becoming glabrous, or sometimes apparently quite glabrous, pale green to whitish-green, sometimes covered with a dry whitish exudation when dried.
Leaves: Alternate, rather rudimentary, only present on very young branchlets and early deciduous, sessile, or subsessile, 3-8 mm long, 1-6 mm broad, ovate or ovate-deltoid, acute or obtuse, channelled down the face, recurved, somewhat fleshy, minutely puberulous.
Inflorescences (Umbels or cymes): Clustered at brances tips or solitary, 3-6 mm in diameter, 3-rayed; rays 3-6 mm long, usually 1–3-times forked, but occasionally simple, minutely puberulous; bracts sessile, 4-7 mm long, 7-12 broad, nearly half-circular or rounded-subrhomboid when flattened out, obtuse or apiculate, concave, minutely puberulous on both sides; involucre sessile, 6-8 mm in diam. and about 1,5-2 mm deep, subglobose-cup-shaped, puberulous outside, glabrous within, with 5 glands overtopped by 5 erect subquadrate slightly fringed or very shortly and densely ciliate lobes; glands 2,5-3 mm long and 3-3,5 mm broad when flattened out, somewhat ovate-triangular or deltoid, with the part adnate to the involucre acute or subacute and the outer part subtruncate or crenulate or slightly lobed and wavy, incurved in dried specimens, but probably more or less deflexed or spreading and concave when alive, puberulous on the back, glabrous on the inner or upper surface. Syles 2-2,5 mm long, united for 1-1,5 mm of their length, with erect or recurved-spreading bifid (or entire?) tips.
Fruits (capsules): Sessile, 6 mm long, 8-9 mm in diameter, somewhat 6-angled, with 3 of the angles subacute, minutely puberulous. The capsule turns red when developed and brown later when it dries.
Seeds: 4 mm long, oblong, somewhat 4-angled, slightly pointed at one end, smooth, pale brown. 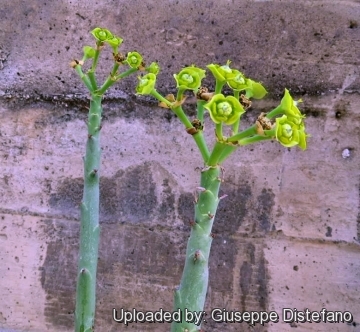 Euphorbia dregeana Photo by: Giuseppe Distefano
Send a photo of this plant.

Cultivation and Propagation: It is an easy species to grow that is suited for any well drained soil in full sun. But young plant are happy growing indoors, where they can easily reach the ceiling. Give the plant an airy growing medium which mainly consists of non organic material such us clay, pumice, lava grit, and only a little peat or leaf-mould. Water regularly during the active growing season from March to September. No water should ever be allowed to stand around the roots. Keep almost completely dry in winter. It is a moderately fast grower, and will quickly become large landscape masterpieces in just 3-5 years. It is a relatively fast growing and long lived plant and once established, it will be content in its position and with its soil for years.
Fertilization: Need a perfect fertilizer diet in summer. Use preferably a cacti and succulents fertilizer with high potassium content including all micro nutrients and trace elements or slow release fertilizer.
Exposure: This plant has an excellent heat tolerance, and need full sun to light shade exposures, but can tolerate shade. However shade grown plants will tend to produce fewer, and etiolated growth. The colour of this plant is much more marked if grown in full sun. But if it is possible to keep the growth of this species compact, with denser, shorter stems such plants can be outright attractive.
Watering: Water regularly during the active growing season. No water should ever be allowed to stand around the roots. Keep almost completely dry in winter. Care must be given in watering, keeping them warm and wet while growing, and cooler and dry when dormant.
Hardiness: Some cold tolerance. This spurge has tolerated temperatures down to –6ºC and even a little snow. However it can be difficult to get it to look its best without a good amount of heat and sun and so it is only really suited to the tropics (USDA Zones 9-12). It can be grown outdoors in the summer months to benefit from direct exposure to light, and especially exposure to high summer temperatures. Protection in a warm greenhouse in the middle of the winter will greatly increase the survival rate.
Rot: Rot it is only a minor problem with Euphorbias if the plants are watered and “aired” correctly. If they are not, fungicides won't help all that much. It is very unlikely to lose this plant from root rot from excessive water.
Manteinance: Re-pot every two years. It like quite small pots, repot in early spring. It can be pruned for shape and branching and trim off the dead 'arms'.
Known hazards: All parts of Euphorbia ooze a milky sap when damaged or cut. Contact with this sap may cause dermatitis in some people, and in the eyes the sap can cause temporary blindness which may last for several days.
Uses: It is an excellent choice to have in a rock garden. They are strong architectural plants that make a definite statement.
Traditional uses: Resin from the stem is used for low-grade rubber, but is said to contain more resin than caoutchouc
Propagation: The plant can be reproduced by seeds or cuttings. Seeds can only be harvested when the capsule is light brown in colour. Due to the explosive nature of the seeds, one should place cottonwool over the seed capsules to stop them being blasted into the surrounding area. The soft cottonwool will effectively trap any seeds. The seed will loose viability in storage, and may not be viable the following year, so the seed should be planted as soon after harvesting as possible. Use a well-drained sowing medium of sandy loam with very well-rotted compost, and preferably sieved river sand to cover the seed. The ideal size of the sand grains should be 1 mm. Germination usually occurs within about a week or two. Cuttings are relatively easy. If you remove an offset, remember to let it dry for some days, letting the wound heal (cuttings planted too soon easily rot before they can grow roots). Lay it on the soil and insert the stem end partially into the substrate. Try to keep the cutting somewhat upright so that the roots are able to grow downward. It is better to wash the cut to remove the latex. The newly planted stems take a few weeks to establish, and then start growing. The best time to strike cuttings is spring.