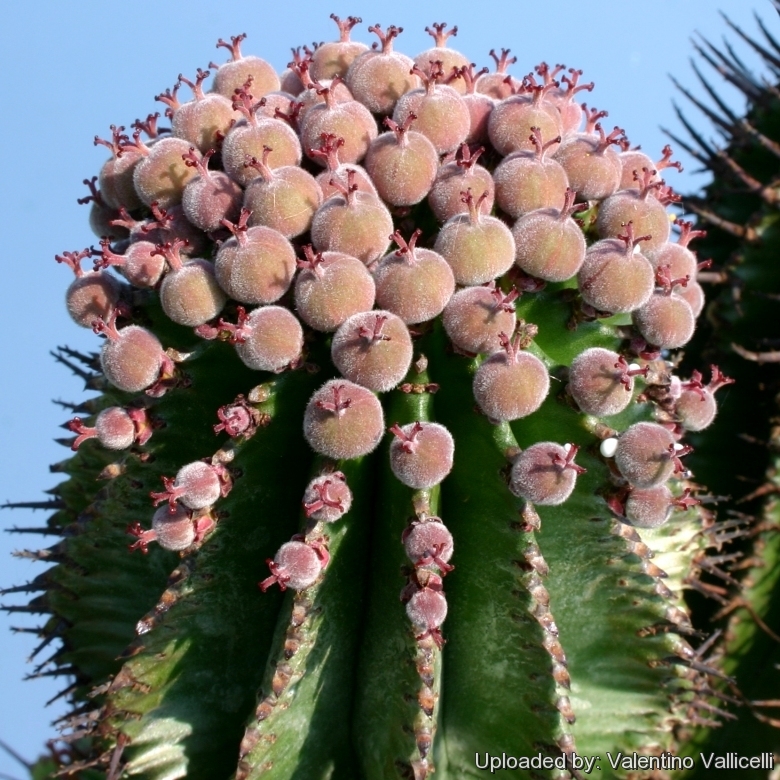 Origin and Habitat: Eastern Cape, South Africa.
Habitat: It is a characteristic feature in the vegetation of the eastern Cape from Uitenhage to Albany division, and often it is locally dominant in very rocky areas where it grows socially especially on quartzite fields but is not so restricted to them.
Ecology: In the eastern Cape region Euphorbia polygona and Euphorbia horrida host the parasitic plant Viscum minimum.

Description: Euphorbia polygona is a spiny dioecious spurge with simple or basally clumping stems of glaucous grey-green with beautiful “heads” of dark purple flowers. These are very minute in themselves, but each is dotted with bright yellow stamens and pollen and the whole effect is very pleasing. In age it will forms clumps of upright columns of unequal length up to a metre wide that bears a very close resemblance to the unrelated cactus. It is heavily armed with spiny protuberances ("peduncles", otherwise known as persistent flower stalks), however the spination is extremely variable some have lots of spines, and some have few.
Stems: Thick, fleshy, cylindrical, erect 30-150 cm high and 7-10 cm in diameter, dull green, blue-green, chalky-grey or often reddish in colour branching from low on ground, surprisingly like those of a Cereus in habit, with 12 to 20 twisting ribs grooved vertically into deep furrows. The stems stores water and carries out photosynthesis. The plant does have green chlorophyll present, but that is often hidden by a very thick layer of bluish-white wax.
Spines (persistent peduncles): Each sharp ridge between the furrows is armed with clusters of 1-3 spines of various lengths (4-10 mm long) about 6 mm apart especially in the leaf axils of older plants. The spiny peduncles have several small bracts.
Cyathia: Solitary, or rarely 2 or 3 three on the same peduncle, up to 7 mm dark purple.
Nectar glands: Close to each other, purple.
Fruit: Up to 6 mm in diameter, globose, subsessile with dense grey hairs.
Remarks: This plant is somewhat variable and there are several other similar Euphorbia species which often looks a lot like some of its forms. Particularly Euphorbia horrida and Euphorbia polygona are hard to tell apart only by body characteristics, at least when the plants are young. The only certain characteristic is in their cyathia. Euphorbia horrida bears green cyathia that sometimes may turn brownish with the age. The cyathia of Euphorbia polygona are red to deep purple.
Parasite: E. polygona is the suitable host plant for the charming parasite Viscum minimum (the smallest species of mistletoe in the world). A minute monoecious, parasitic plant that grows profusely within the stem of the host. Viscum minimum is one of the most interesting examples of parasitism in the flora of South Africa and is also one of the few types of mistletoe that is ever cultivated outside of its native land. It doesn’t cause significant harm to its host plant, and will produce crops of colorful fruit in time for the holidays year after year. 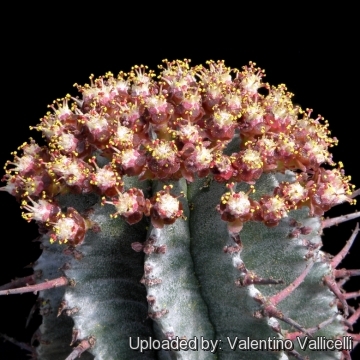 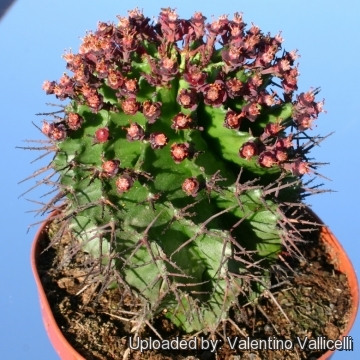 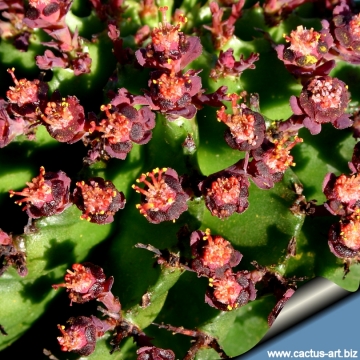 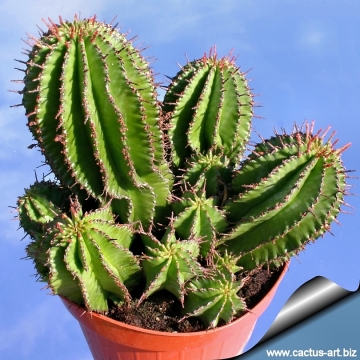 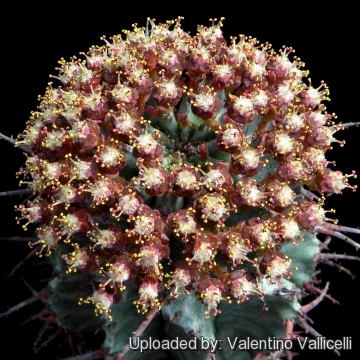 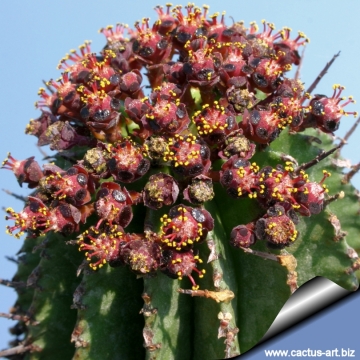 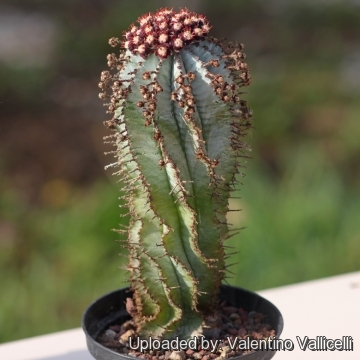 Euphorbia polygona Photo by: Valentino Vallicelli
Send a photo of this plant.

Cultivation and Propagation: It is a pretty easy species, it grow well in a very draining mineral potting substrate but it isn't picky about soil, the area where this plant is native receives rains in both winter and summer, so it can be watered moderately all year around (except in the coldest month of the winter as it rot easily especially if over wet ) During the summer, they enjoy average feeding and watering. Mature healthy plants are tough and can also be grown out of where frost is not too severe , it can tolerate temperatures down -4°C (-10° C if the roots are kept dry). It like Light shade to full sun, but different clones vary in their tolerance of full sunshine. The general rule is that the smaller and rounder the variety, the less it can tolerate full sunshine.
Propagation: It is propagated from seed sown during spring or summer. Germination occurs within 3 weeks but it can be reproduced by cuttings (The larger forms tend to branch enthusiastically and offsets are readily available) if you remove an offset, remember to let it dry for a week or so, letting the wound heal (cutting planted to soon easily rot before they can grow roots). It is better to wash the cut to remove the latex.
Flowering can be achieved within 5-8 years.
Warning: As with all other Euphorbias when a plant get damaged it exudes a thick white milky sap known as latex. This latex is poisonous and may irritate skin, and pay extreme attention not to get any in your eyes or mouth. Cultivated plants must be handled carefully.