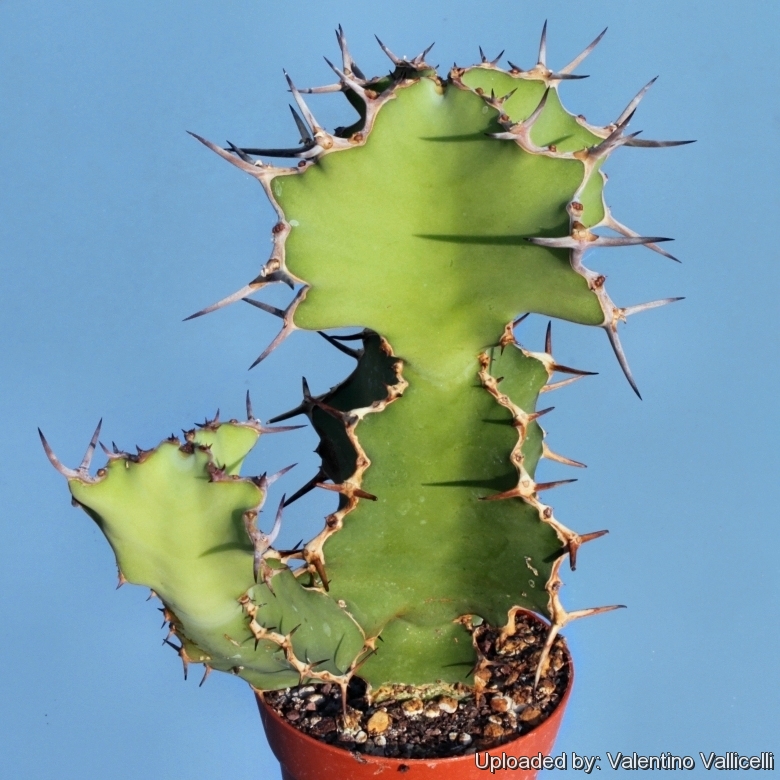 Euphorbia grandicornis Photo by: Valentino Vallicelli
Superbly decorative cactus like Euphorbia with strong impressive spines resembling the shape of cows’ horns. Placed alone with its exaggerated form is as intriguing as a sculpture. It bears tiny yellow to green flowers surrounded by little leaves.

Description: Euphorbia grandicornis is a great looking upright multistemmed succulent shrub with strong spines resembling the shape of cows’ horns. It has great angular and zig-zag shaped stems making in a good ornamental choice. It has a close rigid bushy growth habit and can become enormous, often collapsing under its own weight eventually grows up to 2 m tall and about the same in width.
Stem: 3(-4) winged, up to 10 cm in diameter, irregular, constricted in broad, twisted, triangular segments about 15 cm long. Centre of the segments conspicuously pale.
Leaves: Tiny, scale-like between the spines, in summer where the new growth forms, but usually devoid of leaves all winter. So that photosyntesis is carried out by the green branches.
Spines: Spines shield grey or brownish, joined, forming a horny continuous ridge, the (stipular) spines are paired 30-70 mm long.
Flowers: Quite striking and brilliant yellow cyathia, growing just above the spines on the ridges of the terminal segment, usually on mature plants, and mostly those growing in full sun. They are usually in groups of three, the middle one (sessile) male and the other two (peduncled) bisexual. Involucral bracts 8 m in diameter, glabrous, glands 5 up to 4 mm long entire yellow.
Blooming season: Flowers and fruits in late spring.
Fruits: 3-lobed capsule, Ø 8 mm purple when ripe. They are quite attractive lining up in rows on the angled ridges of the branches.

Subspecies, varieties, forms and cultivars of plants belonging to the Euphorbia grandicornis group 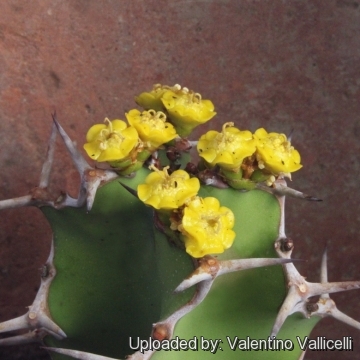 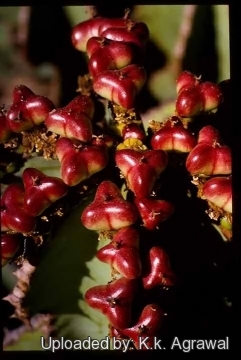 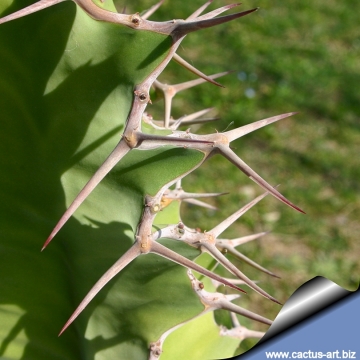 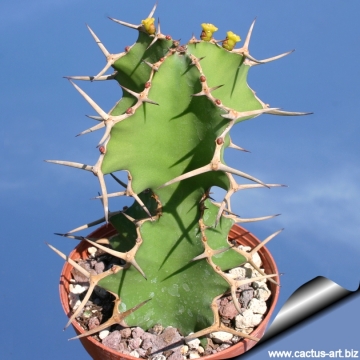 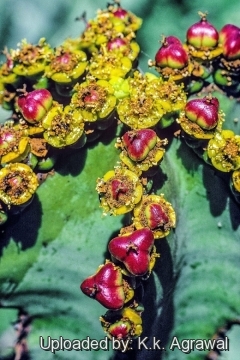 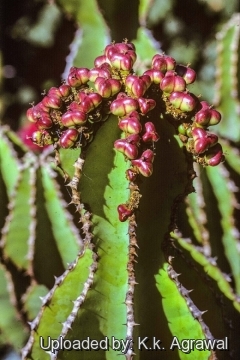 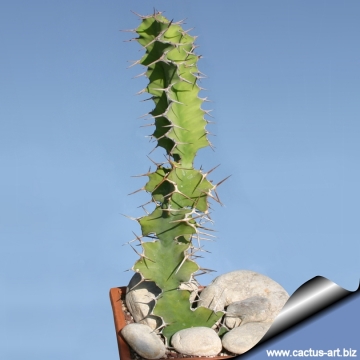 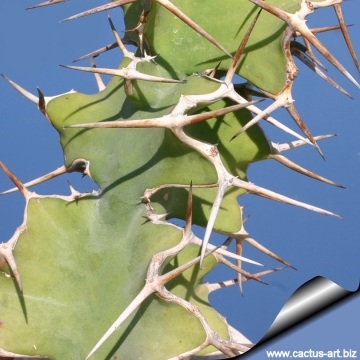 Cultivation and Propagation: It is an easy species to grow that is suited for any well drained soil in full sun. But young plant are happy growing indoors, where they can easily reach the ceiling. Give the plant an airy growing medium which mainly consists of non organic material such us clay, pumice, lava grit, and only a little peat or leaf-mould. Water regularly during the active growing season from March to September. No water should ever be allowed to stand around the roots. Keep almost completely dry in winter. It is a moderately fast grower, and will quickly become large landscape masterpieces in just 3-5 years. Only downside is from strong winds, the columns often smash into each other, causing permanent scarring... best to plant in such a location where winds are not a big issue. If plant becomes very red, this is a sign that the roots have not developed properly. It is a relatively fast growing and long lived plant and once established, it will be content in its position and with its soil for years. It can tolerate moderate shade, and a plant that has been growing in shade should be slowly hardened off before placing it in full sun as the plant will be severely scorched if moved too suddenly from shade into sun. Like quite small pots, repott in very later winter, early spring. Can be pruned for shape and branching. Frost tender, frost free zones only. Plant Pests: Prone to mealy bugs and rarely scale.
Propagation: It is easy to propagate by cuttings in late spring to summer, just take a cutting of the plant let it dry for 1 or 2 weeks and stuff it in the ground (preferably dry, loose, extremely well draining soil).
Warning: All Euphorbias contain a white sap that can be irritating to eyes and mucous membranes. If contact is made with this white sap, take care to not touch face or eyes before washing hands with soap and water.
Uses: Makes a great barrier plant. It can be pruned regularly and kept short or be allowed to grow tall. If you have goats or cattle, they will eat this plant on the edges , trying to avoid the spines. It seems the latex doesn't bother or irritate the animals, truly weird!