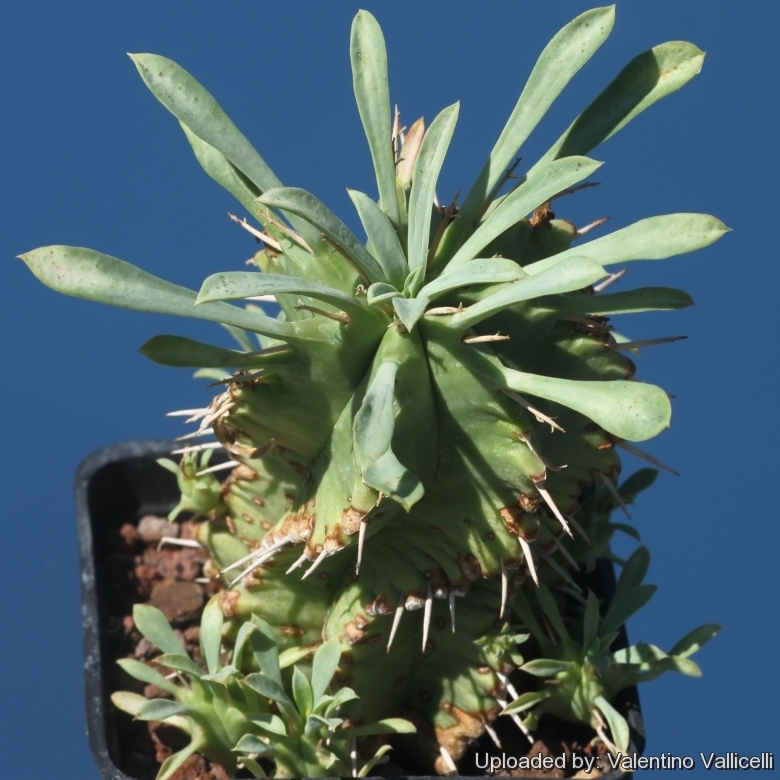 Origin and Habitat: South Africa (Natal), Lesotho. It is located from the south at Queenstown, to the north, through and along Lesotho, the Drakensbergen, Free State and kwazulu Natal up to Zoutpansbergen in the Northern Province, Limpopo, Mpumalanga
Habitat: It grows in predominantly in flat areas on gypseous, limestone or silt plain with a lot of rain, up to 1000 mm per year, and even with snow sometimes. At some locations it is the most dominant vegetation, often growing together with Euphorbia esculenta, Euphorbia mammillaris, Euphorbia cuneata, Acacia sp., Commiphora sp., Maerua sp. , Turraea parvifolia, Boscia minimifolia, Andropogon kelleri, Lactyloctenium robecchii, Crotalaria Fagonia and Cleome brachycarpa.

Description: It is a low-growing clumping dioecious (having distinct male and female specimens) succulent, that in nature forms impressive giant pulvini (cushions), composed of several thousands of little spiny heads. In the ground it makes a striking cushion to up to 1,5 (or more) meters in height and across. Some very old plants must have 40.000 heads or more!!! Sometimes several plants are aggregated into masses up to three meters in diameter.
Stem: Short, globose, usually 7-angled (but occasionally up to 10 angled), becoming columnar with numerous branches from the base, branches mostly simple, leafless, spiny 2,5-15 cm long, 2,5-3,5(-5) cm thick, very obtusely rounded at the tips with the apex slightly depressed, green, glabrous; angles subacute, slightly crenate, with broad triangular furrows about 2-4 mmdeep between them, which flatten with age; The most common form in cultivation has compact fat globular heads that seldom exceed 12 cm in height
Leaves: Rudimentary, 2-30(-50) mm long, linear-lanceolate, acute, deciduous, leaving small white scars.
Spines (modified sterile peduncles): White to purple (depending on the season) 1-2 cm long, solitary and irregularly scattered along the angles, usually 1-1,5 cm apart, sometimes more closely placed, with a few minute scale-like bracts scattered along them when young, glabrous.
Flowers: Dioecious (having solitary cyathia on distinct male and female specimens) Involucres clustered at the apex of the branches, sessile or subsessile, in the male plant about 4-5 mm and in the female about 2-3 mm in diam., shortly and broadly cup-shaped, glabrous, dark red-purple, with 5 glands and 5 transversely oblong toothed or subentire lobes; nectar-glands 5-6 distinct, 1-1,5 mm in their greater diam., transversely elliptic-oblong, entire, dark purple; ovary sessile, but exceeding the involucre, glabrous; styles 1,5-2 mm long, stout, united for nearly or quite half their length, then spreading, 2-lobed at the apex;
Fruit: Capsule about 4-5 mm in diameter, sessile, obtusely 3-angled;
Seeds: 2-3 mm long, ovoid or somewhat pear-shaped, smooth, glabrous, pale brown.
Remarks: Euphorbia pulvinata has a large area of distribution, and is a very variable species. The plants from the northern distribution area differ clearly from those of the south: one forming dense cushions of up to 30 cm in height, the other with few stems, up to 1 m high (The small one is the most common in cultivation). The difference between populations is the frequency of the appearance in which these forms occur. So it can happen that two individuals of two different populations can look very similar and also, two plants of the same population can look very different. However when you are looking at the whole population, you can see the difference of one population from another.

Subspecies, varieties, forms and cultivars of plants belonging to the Euphorbia pulvinata group

Notes: Euphorbia pulvinata belongs to a group of plants, together with the closely related species Euphorbia ferox and Euphorbia aggregata, which can be recognised by their striking growing-shape. They consist mostly of compact, multiple branched and heavily thorny cushions. These species are closely related, and for an outsider it's very difficult to distinguish them. There are differences, though. 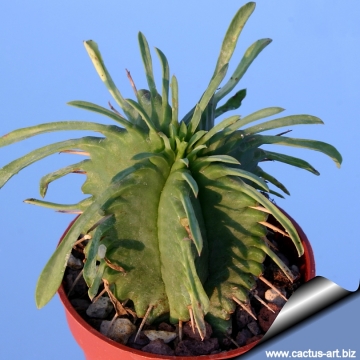 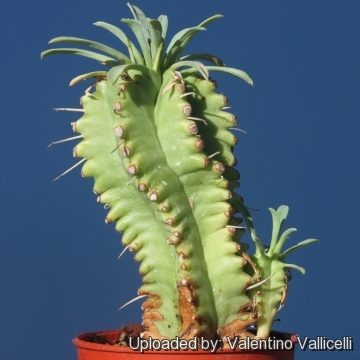 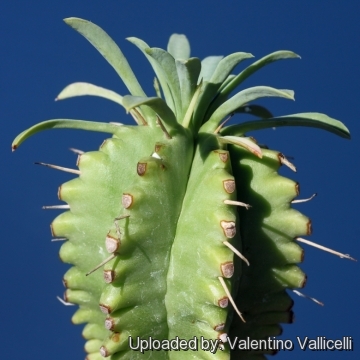 Euphorbia pulvinata Photo by: Valentino Vallicelli
Send a photo of this plant.

Cultivation and Propagation: It is a pretty easy species for pot culture. Mature healthy plants are tough, and can also be grown out of doors where frost is not too severe.
Growth rate: It is a relatively rapidly growing species that will make large clumps whit hundreds or even thousands heads given the best conditions.
Soil: It grows well in a very draining mineral potting substrate, but it isn't picky about soil.
Repotting: Use pot with good drainage.
Watering: The area where this plant is native receives rain both in winter and summer, so it can be watered moderately all year around (except in the coldest month of the winter as it rots easily, especially if over wet ). During the summer they enjoy average watering, but do not overwater (Rot prone).
Fertilization: Feed with a high potassium fertilizer in summer.
Hardiness: When dormant, the plant is very cold tolerant (down to nearly -9° C or less), but when left out it is more sensitive to frost.
Exposure: They do need a lot of light to keep their compact growth-form, but different clones vary in their tolerance of full sunshine. However some protection in light shade is recommended during the hottest hours in summer.
Uses: It is an excellent plant for container growing. It always looks good and stays small. It looks fine in a cold greenhouse and frame.
Warning: As with all other Euphorbias when a plant get damaged it exudes a thick white milky sap known as latex. This latex is poisonous, and may irritate skin. Pay extreme attention not to get any in your eyes or mouth.
Cultivated plants must be handled carefully.
Rot: Rot it is only a minor problem with Euphorbias if the plants are watered and “aired” correctly. If they are not, fungicides won't help all that much.
Propagation: It is propagated by cuttings (It branches enthusiastically, and offsets are readily available). If you remove an offset, remember to let it dry for some days, letting the wound heal (cuttings planted too soon easily rot before they can grow roots). Lay it on the soil and insert the stem end partially into the substrate. Try to keep the cutting somewhat upright so that the roots are able to grow downward. It is better to wash the cut to remove the latex.