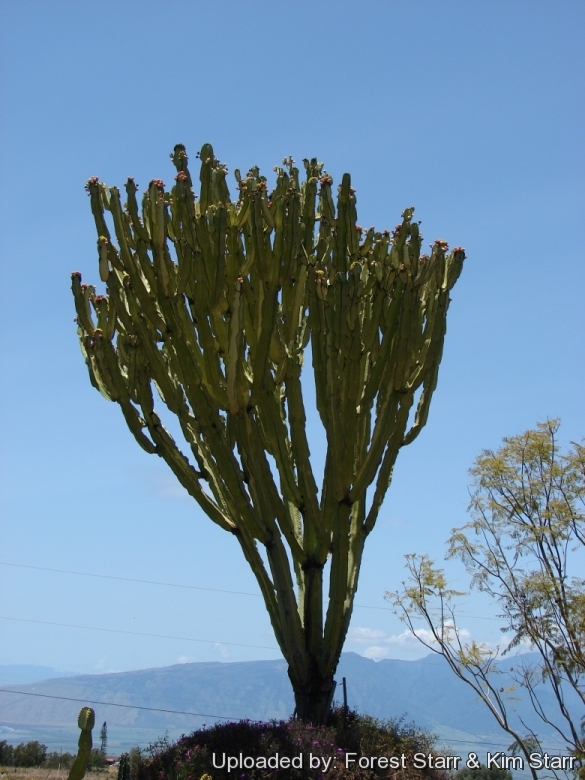 Origin and Habitat: Yemen, Saudi Arabia peninsula.
Altitude range: 1,000 and 1,500(2,500?) metres above sea level.
Habitat: Euphorbia ammak grows in rockier areas in planes and in steep hillsides and thorny bush-lands, and once an important component of the succulent shrubland. It has now become scarce, particularly in Saudi Arabia and South Yemen, although it remains common in places in North Yemen.

Description: Euphorbia ammak is a striking Euphorbia of massive stature that resembles to Euphorbia candelabra but It branches but not profusely. It is a typical representative of large, tree-like Euphorbias that can grow up to 10 m tall with a short trunk, it is superficially similar to some new world Cacti. The upright broadly obconical crown of this plant make it looks like a a branched candelabra.
Stem: Erect, stout, 10-15 cm wide. The branches starting about 60 cm and arches upward.
Ribs: Thick, undulate, usually four-winged, dark-green, with situate teeth 1 cm apart.
Spines: Up to one cm long. Brown, paired, horn shaped, obtriangular, and quite separate.
Leaves: In the right climate (wet and warm at the same time) it will produce simple lancelote leaves near the top of each branch. These leaves are much larger and more prominent in the green form than in the variegated/yellow forms. On the seedling they are up to 40 mm long and 7 mm wide, but in the young shoots they are smaller.
Flowers: Solitary subsessile cymnes above the pair of spines, yellow-green, approx 1 cm in diameter, fleshy, with 5 glands. Female flowers carry a three part pistil over a three part ovary, producing three or sometimes more seeds.
Fruits: Green, 2-3 loculed, 3 mm in diameter smooth.
Remarks: There is a commonly cultivated variegated version called (in the U.S.A.) Euphorbia ammak “variegata” , but this plant is more properly Euphorbia erythraeae f. variegata. which has a cream-yellow and pale blue-green marbled appearance with dark, brown spines.

Notes: This species is particularly noticeable for the fact that it shows a great variability . 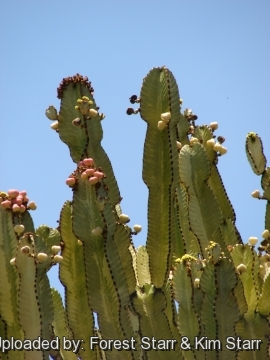 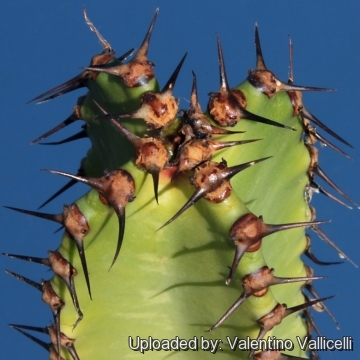 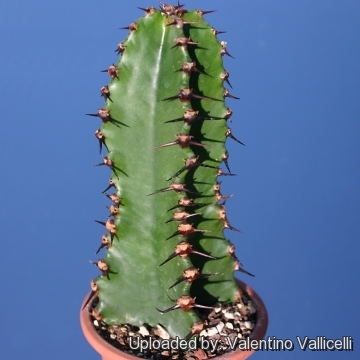 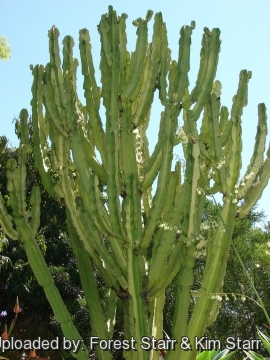 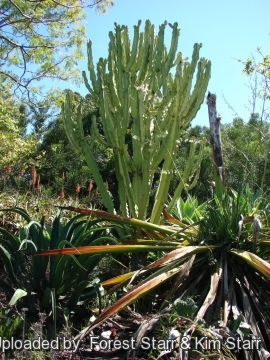 Cultivation and Propagation: It is an easy species to grow that is suited for any well drained soil in full sun. But young plant are happy growing indoors, where they can easily reach the ceiling. Give the plant an airy growing medium which mainly consists of non organic material such us clay, pumice, lava grit, and only a little peat or leaf-mould. Water regularly during the active growing season from March to September. No water should ever be allowed to stand around the roots. Keep almost completely dry in winter. It is a moderately fast grower, and will quickly become large landscape masterpieces in just 3-5 years. Only downside is from strong winds, the columns often smash into each other, causing permanent scarring... best to plant in such a location where winds are not a big issue. If plant becomes very red, this is a sign that the roots have not developed properly. It is a relatively fast growing and long lived plant and once established, it will be content in its position and with its soil for years. It can tolerate moderate shade, and a plant that has been growing in shade should be slowly hardened off before placing it in full sun as the plant will be severely scorched if moved too suddenly from shade into sun. Like quite small pots, repott in very later winter, early spring. Can be pruned for shape and branching. Frost tender, frost free zones only. Plant Pests: Prone to mealy bugs and rarely scale.
Propagation: It is easy to propagate by cuttings in late spring to summer, just take a cutting of the plant let it dry for 1 or 2 weeks and stuff it in the ground (preferably dry, loose, extremely well draining soil).
Warning: All Euphorbias contain a white sap that can be irritating to eyes and mucous membranes. If contact is made with this white sap, take care to not touch face or eyes before washing hands with soap and water.