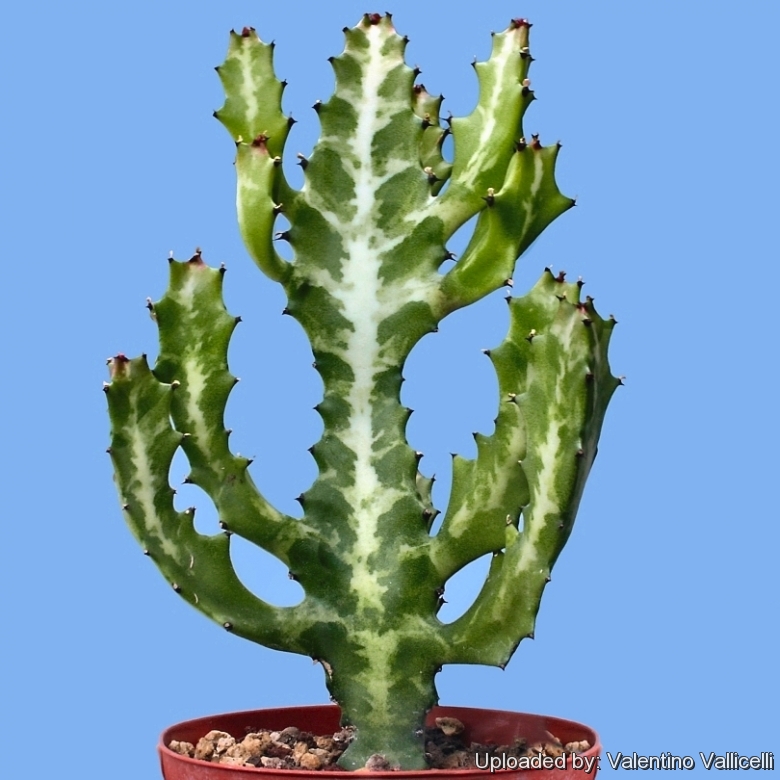 Origin and Habitat: Grows wild, in tropical Asia. Widely cultivated in west Indies, Florida and in many tropical areas world wide. Widely escaped from cultivation and in many places forming dense thickets.
Habitat and ecology: These plants with succulent stems and water storage tissue are adapted to dry regions. Like cacti, they have developed similar compact for with reduced surface and less water loss, also green stems replacing leaves in food manufacture.

Description: Euphorbia lactea is a tall, dark-green, many-branched, cactus-like shrub or small tree hairless throughout. It has a distinctive silhouette and can grow 3-6 m tall (or more) but rarely does in cultivation. Euphorbia lactea is one of the most common succulent euphorbias in cultivation, but highly variable with several forms and hybrids making precise descriptions of it difficult. Variegated and crested Euphorbia lactea is a popular subject for grafting; prized specimens are intricately convoluted and blend creamy white with shades of green and pink.
Stems: It forms an erect, many branched, straight brown, fissured trunk, with whorls of branches nearly to base. Branches angled approx 5 cm in diameter, constricted into oblong green segments 10-30 cm long. Centre of the segments conspicuously pale often with very ornamental whitish and lime green marbled marking. A milky, sticky latex naturally oozes from wounds. The soft cut branches have a light green outer layer less than 3 mm thick, which yields latex, and within whitish watery tissue, slightly bitter.
Ribs: 3(or 4) slightly winged, sinuate.
Leaves: It has only the tiniest hint of leaves at the growing tips in summer. The leaves are alternate, stalkless, rudimentary, circular, reddish, 3-4 mm in diameter, sessile and early deciduous, or absent.
Stipular spines: Tiny, short but sharp, paired, widely divergent along the margins, 2-6 mm long.
Flowers (Cyathia): Small and inconspicuous, borne intermittently. It is not known to flower in captivity.

Subspecies, varieties, forms and cultivars of plants belonging to the Euphorbia lactea group 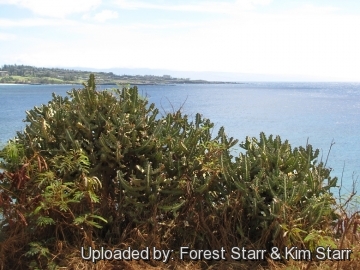 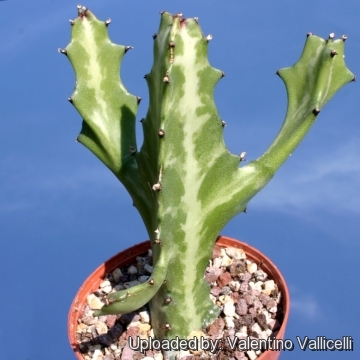 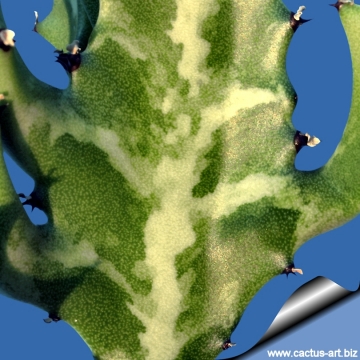 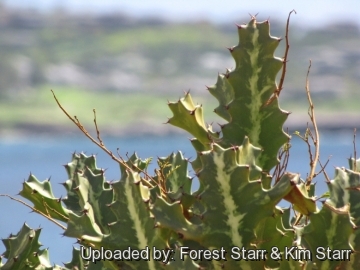 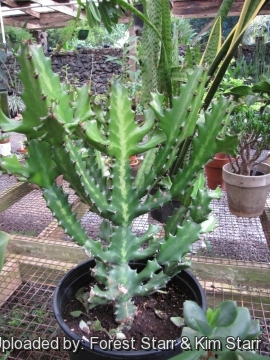 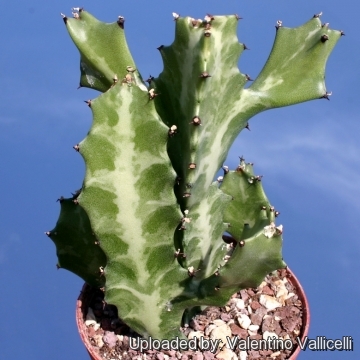 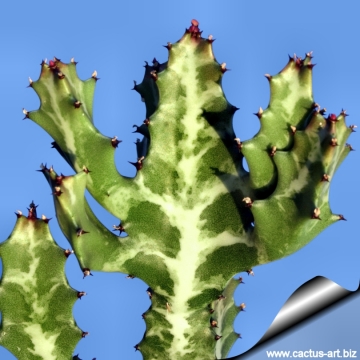 Cultivation and Propagation: Euphorbia lactea is only hardy to maybe 5° C and most grow it either in pots (excellent potted plant) or plant it in very protected locations. Euphorbia lactea being from a tropical climate, it is one of the few columnar Euphorbias that do exceptionally well in very wet, humid climates.
Exposure: It need bright light to partial shade for best appearance (but the variegated forms do best if protected from strong sunshine in the hottest hours of the day).
Growth rate: It is extremely rapid growing and responds well to warmth, with its active growth period in the late spring and summer months.
Watering: Water thoroughly when soil is dry to the touch during active growing season (more than once a week during hot weather) In the winter months, waterigs should be suspended or restricted to once over the winter. The most common failure in growing this plant is over watering, especially during the winter months.
Soil: Likes porous soil with adequate drainage.
Pest and diseases: Succulent Euphorbias in greenhouses apparently are seldom affected by fungous diseases.
Ghost form: The Ghost form (Euphorbia lactea cv. White Ghost) can be badly burned in direct sunlight, though acclimating it to morning sun is not difficult. This is a slow growing plant, though the cristate forms seem particularly slow growing.
Cristate forms: The crested form (Euphorbia lactea f. cristata) are usually grown as grafted plants and that may have something to do with their slow growth rate.
Propagation: It is propagated by cuttings, while the variegated and crested forms are difficult to grow on their own roots, and are generally grafted for convenience on Euphorbia canariensis or Euphorbia resinifera.
Propagation: It is recommend taking Euphorbia cuttings in Spring/Summer when the plant is growing so that they have a better chance of success. They key is heat & good air circulation. These cuttings should be dipped in Hormone powder (but it is not needed) and left for a period of 3-4 weeks to callous. Then pot the cutting and don't water ( or kept slightly moist) until rooted. These will root just fine, if you can put the pot outside in the summer, or put pot on a heating pad.
Warning: As with all other Euphorbias when a plant get damaged it exudes a thick white milky sap known as latex. This latex is poisonous and particularly dangerous for the eyes, skin and mucous membranes. So pay extreme attention not to get any in your eyes or mouth. Internally it is bitter, irritant, emetic and purgative. Ingestion should be avoided by children and family pets. Cultivated plants must be handled carefully.
Uses: It is a fence plant that makes very thick-set hedges, it is also used in traditional medicine against, in warts and tumor.