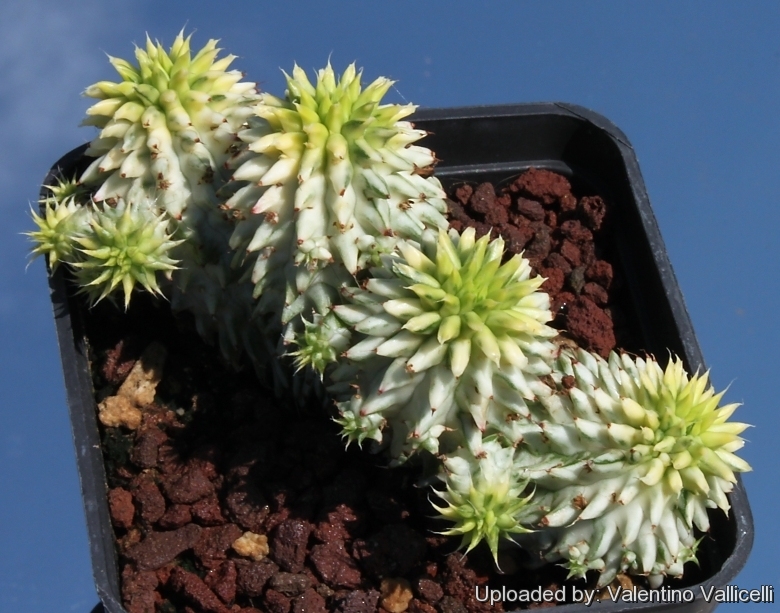 Description: The common Euphorbia susannae is a small clumping or (rarely) solitary succulent, that forms nice hemispherical clumps up to 10 cm tall and 30 cm in diameter. The variegated cultivars (Euphorbia susannae f. variegata) has sectors or stripes with distinct shades of creamy-white, pale yellow or even pink in strong light. This form with variegated stems is very attractive and highly prized. The variegated form is usually seen grafted on stronger columnar species, but it can be grown on its own roots too, but stay much smaller.
Stems: Green, cream, yellow and pink, prominently tubercled, harmless, 12 to 16 angled. It produces a host of branches from the central roundish base (caudex).
Leaves: Reduced to short bristles on the young stems.
Flowers: Green or brownish cyathias in the fall or spring.

Subspecies, varieties, forms and cultivars of plants belonging to the Euphorbia susannae group 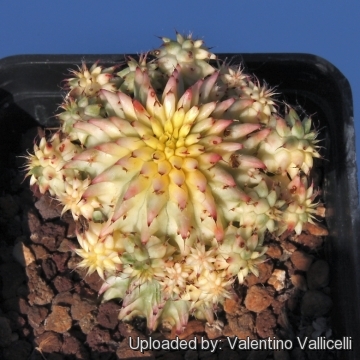 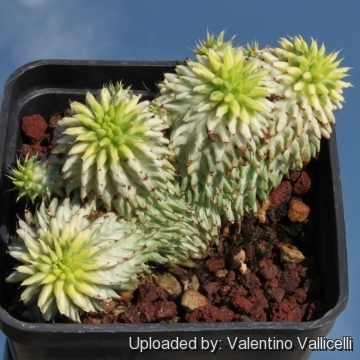 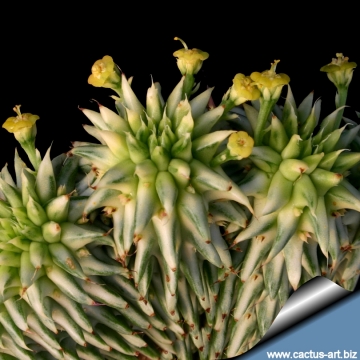 Cultivation and Propagation: The variegated Euphorbia susannae is difficult to grow on its own roots, and is generally grafted for convenience on Euphorbia canariensis or Euphorbia resinifera.
Frost Tolerance: Need frost protection.
Sun Exposure: Light shade.
Propagation: Grafting. The plants that are grafted on a more vigorous and easier stocks are easier to keep aand grow faster. The method of grafting euphorbias differs little from that of other succulents, except in one important aspect. The latex must be washed or sprayed off until hardly anything remains. After the latex flow has stopped, a further 1-2 mm slice can be taken from both surfaces without a new latex flow starting. Both scion and stock need to be at the start of the growing season. The stock should be cut as near as possible to the growing tip, as here the vascular bundles are dense and not yet woody and will feed the scion in the best possible way. Where possible stock and scion should be of similar diameter. The cut surfaces are held together with elastic bands in cross style, over the plant top and under the pot. The plants should be left in an airy and shady place for 7-10 days before the bands are removed.
Warning: As with all other Euphorbias when a plant get damaged it exudes a thick white milky sap known as latex. This latex is poisonous and particularly dangerous for the eyes, skin and mucous membranes. So pay extreme attention not to get any in your eyes or mouth. Cultivated plants must be handled carefully.