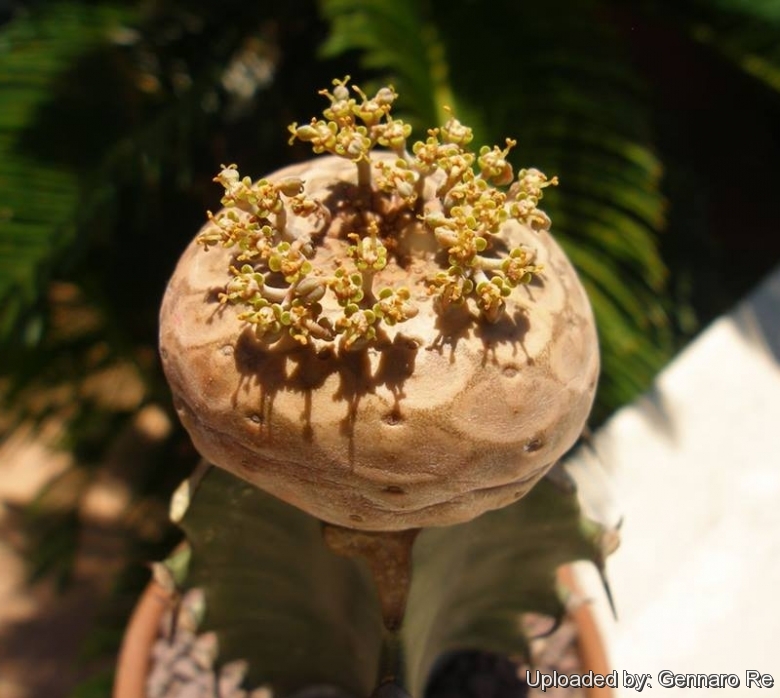 Euphorbia turbiniformis Photo by: Gennaro Re

Origin and Habitat: This is a narrow endemic Euphorbia found only in a small part of north-eastern Somalia. Once believed extinct, this species was originally described by Emilio Chiovenda (1874-1941) in 'Flora Somala vol 3' on 1936 and newly rediscovered 32 years later by John J. Lavranos near Eil (Eyl) in Somalia.
Altitude: Around 300 metres above sea level.
Habitat: It is found on a limestone plateau where it grows partially buried in the soil.

Description: Euphorbia turbiniformis is a dwarf, spineless, globose succulent with beautiful tessellated
markings.
Stem: Spherical or turbiniform with a short obconic caudex about 4 cm tall x 4-6(-8) cm in diameter, it grows almost buried in the soil and has lost all its spines. The apex is depressed and the epidermis is smooth, shining. The surface is sticky and in habitat it is often covered by a thin layer of soil. Usually it has a single growing point, but in cultivation the plant can branch dichotomously forming two to several apexes.
Spines: Vestigial, inconspicuous, present only on very young seedlings and completely absent on mature specimen. The spine-shields are reduced to minuscule scales at the centre of the tessellations.
Inflorescence: It produces short cymose inflorescences up to 5 mm long around the apex of the plant body, peduncles stout 2-5 long.
Flowers: It has small yellow cyathia both male and female in the same flowering stalk, of which 1 male cyathium in the centre and 2 to 6 lateral female cyathia.

Subspecies, varieties, forms and cultivars of plants belonging to the Euphorbia turbiniformis group 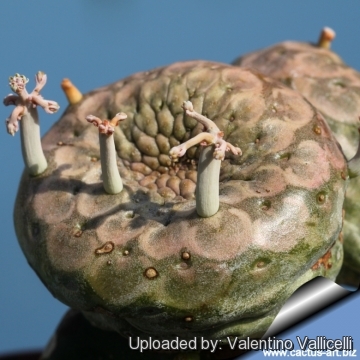 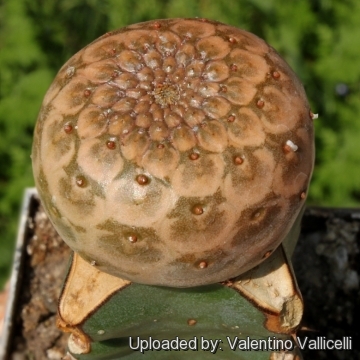 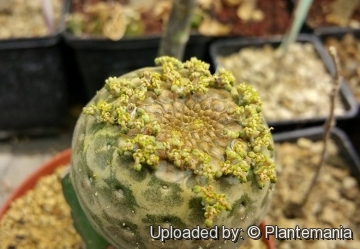 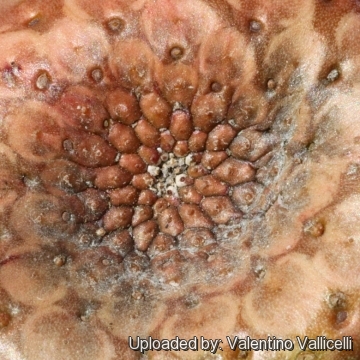 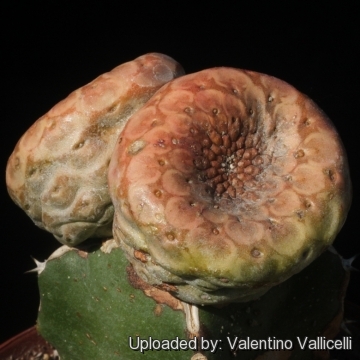 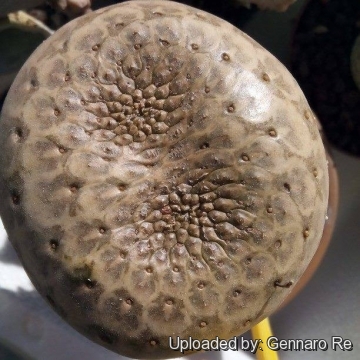 Euphorbia turbiniformis Photo by: Gennaro Re 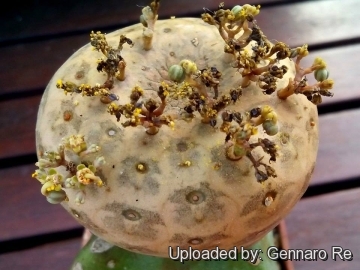 Euphorbia turbiniformis with fruits. Photo by: Gennaro Re 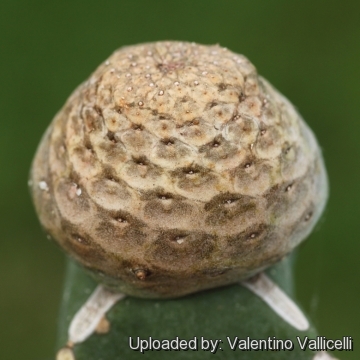 Cultivation and Propagation: This species is always found grafted because it is very difficult (if not impossible) to grow it on its own roots. It is a very sensitive, slow growing plant that takes two resting periods during summer and winter months; it needs a very bright and warm place, especially well drained soil and extra bottom heating. It does best in a mineral soil, good drainage is essential. Water sparingly during the summer months and keep dry in winter. In the short growing season it likes ample water and in this period it grows rather quickly, though not for a long time. When not in growth it is killed right away, when given too much water. It is a slow growing long lived plant and once established, it will be content in its position and with its soil for years. It can tolerate moderate shade, and a plant that has been growing in shade should be slowly hardened off before placing it in full sun as the plant will be severely scorched if moved too suddenly from shade into sun.
Frost Tolerance: Tender, it needs frost protection. Recommended minimum temperature is 12 °C or even above.
Propagation: It may be propagated from seed sown during spring or summer. But seedling are very difficult and will hardly ever result in well established plants and are best grown grafted.
Grafting: The plants that are grafted on a more vigorous and easier stocks are easier to keep, grow faster and produce more flowers and seeds. The method of grafting euphorbias differs little from that of other succulents, except in one important aspect. The latex must be washed or sprayed off until hardly anything remains. After the latex flow has stopped, a further 1-2 mm slice can be taken from both surfaces without a new latex flow starting. Both scion and stock need to be at the start of the growing season. The stock should be cut as near as possible to the growing tip, as here the vascular bundles are dense and not yet woody and will feed the scion in the best possible way. Where possible stock and scion should be of similar diameter. The cut surfaces are held together with elastic bands in cross style, over the plant top and under the pot. The plants should be left in an airy and shady place for 7-10 days before the bands are removed. E. turbiniformis is grown almost exclusively grafted on Euphorbia canariensis which proven to be the ideal grafting stock. The grafting are very successful, new grafts often show growth within 3 weeks.
Warning: As with all other Euphorbias when a plant get damaged it exudes a thick white milky sap known as latex. This latex is poisonous and particularly dangerous for the eyes, skin and mucous membranes. So pay extreme attention not to get any in your eyes or mouth. Cultivated plants must be handled carefully.