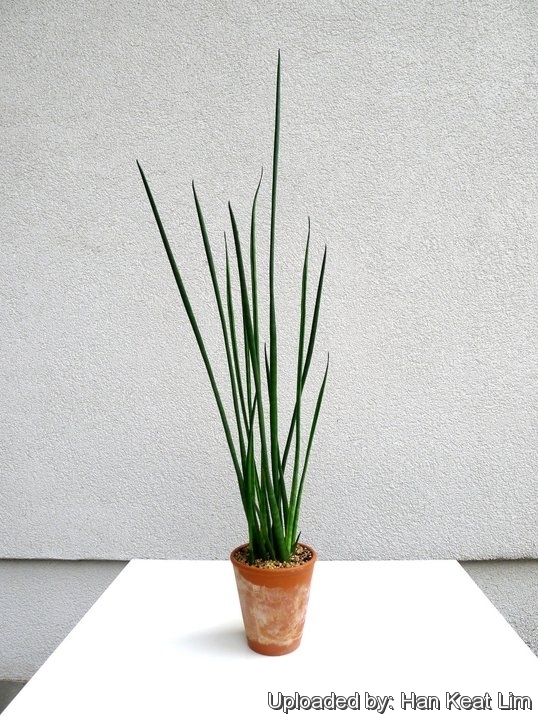 Description: Sansevieria bacularis is a perennial stemless succulent plant with one, sometimes two thin cylindrical upstanding slender leaves up to 1.7 metres tall, but only 12 mm in diameter, and quite stiff in good light conditions. New growth has a purple sheath at the base. The first description was in 2010 by Alan Butler and Stephen Jankalski.
Derivation of specific name: The name "bacularis" is derived from the Latin, "Baculum", meaning a stick or a rod, or a staff, in allusion to the cylindrical leaves.
Leaves. Solitary, or occasionally 2 together, sometimes arising from the rhizome close together one before another, or a few centimetres apart along the rhizome, leaf blade simple, erect, cylindrical 1.25 to 1.70 meters long, up to 1.5 centimeters in diameter, very rough and leathery to the touch, dark green with lighter transverse bands and without longitudinal ribs. Apical spine soft. The base of the main blade is covered by five to six short basal-leaves (or sheaths) that are dark purple when young, becoming dry to light brown 2-5 cm long and 2-3 cm wide.
Inflorescences: Paniculate 50-70 cm tall. The panicles are with 2-8-flowered tuft.
Flowers: White with purple stripes. Corolla tube 15 to 17 mm long. Lobes up to 2 millimeters long. Flowering is erratic. Unlike plants such as agave which die after flowering, Sansevieria will simply cease to produce new leaves. The flowered plant will continue to grow by producing plantlets via its rhizomes or stolons.
Related species: In the horticultural trade, Sansevieria bacularis is often misidentified as Sansevieria sulcata (a synonym of Sansevieria canaliculata). These two species appear to be closely allied to Sansevieria cylindrica Bojer and Sansevieria erythraeae Mattei (Sansevieria schweinfurthii Tackholm & Drar, nom. illegit.).

Notes: The genus Sansevieria numbers about 60 species most of them native of Africa, it has been variously included in the Amaryllidaceae, the Liliaceae and the Agavaceae but is nowadays usually placed in the Dracaenaceae.

Cultivation and Propagation: Sansevieria bacularis is easy, but very slow-growing and tolerates a wide range of conditions. A great container plant that needs little care.
Soil: Use a soil mix consisting of 3 parts loam to 1 part of pumice.
Moisture requirements: The plants are very drought tolerant and are watered about every other week during the growing season. During the winter months they are watered once a month. Water sparingly and not at all as temperatures dip in winter but can tolerate going months between watering.
Fertilization: They are fertilized once during the growing season with a balanced fertilizer.
Light requirements: Will tolerate low light levels but grows best and flowers if given bright light and even tolerates full sun. In the garden In mild to tropical climates it prefers semishade or shade and it is not fussy.
Hardness: Sansevieria bacularis will die if temperatures drop below 7°C with wet soil. However, it can survive near freezing temperatures if the soil is dry - but it is best to avoid freezing temperatures. If growing outdoors in frost free areas keep in a covered patio or under an area where plants do not receive winter rainfall.
Heat Tolerance: Excellent.
Propagation: Sansevierias are propagated by cuttings or by divisions taken at any time. Cuttings should be at least 10 cm long and inserted in moist sand. A rhizome will emerge at the cut edge of the leaf.