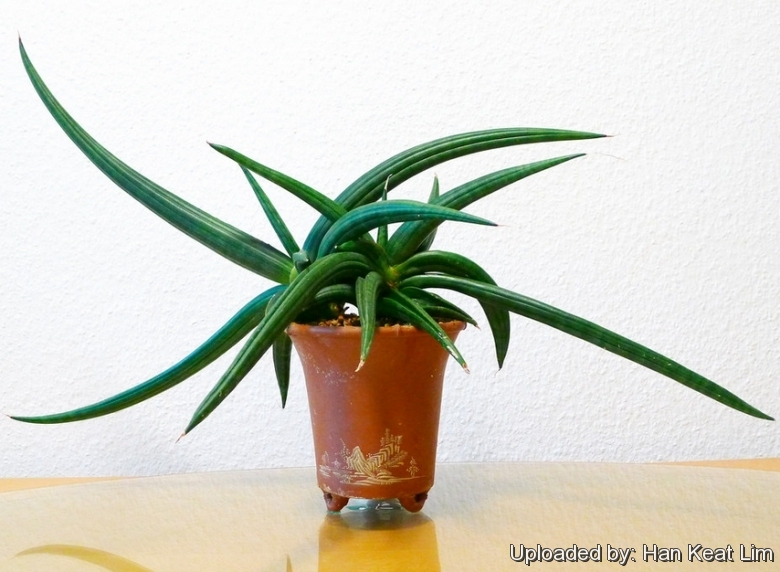 Origin and Habitat: Sansevieria patens was described by N. E. Brown (1915) from a plant growing at Kew, with the comment “Origin unknown, but probably British East Africa”. British East Africa is an early name for what is now known as Kenya.

Description: Sansevieria patens is a fantastic sansevieria that has a juvenile growth form that persists into maturity, unlike most of the other species which have two kinds of leaves: those of seedling or juvenile leaves and adult leaves. It is an acaulescent succulent herb with subterranean branching, rhizomes 2–2.5 cm in diameter forming large rosettes composed of short, arching, cylindrical, longitudinally grooved leaves that spread in various orientations. Older plants are wonderful natural sculptures.
Derivation: The specific name refers to the arrangement of the leaves that are unusually open for the genus (from Latin 'patens', spreading, widely open).
Leaves: 5 - 10 to a growth, distichous or spiral-distichous, recurved, spreading from their base in a fan-like manner, slightly rough, the inner of adult plants 45-90 cm long, 18-45 mm thick from front to back and 18-30mm thick from side to side at the base, the outer gradually shorter, compressed-cylindric, with an acute channel much narrower than the leaf extending from the base to the apex on the face, tapering upwards and at the apex somewhat abruptly contracted into a hard acute whitish point 6-12 mm long, marked with a brown band at its base, somewhat indistinctly marked with dark green and paler green transverse bands, becoming bluish-green with age, longitudinally marked with numerous blackish-green lines, several of them continuous to the apex, others interrupted; margins of the channel acute, green or only whitish along the basal 2-15 centimetres.
Inflorescences: Flower-stem 45–60(–90) 40 cm or more long, pale green (purplish blue when young), one-third of this length, with numerous greyish orbicular spots, bearing a spike-like raceme. Lower inflorescence bracts 2–3, c. 18–50 mm long, on basal third, acuminate; bracteoles lanceolate, 3–6 mm long, acute, membranous. Pedicels 5–6 mm long, persistent part 3–4 cm long, jointed at the middle.
Flowers: Flowers 2-3 in a cluster, grey-white. Tube 9–10 mm cm long, 1 mm wide, slightly inflated at base, lobes linear, 1.2 mm long, 1 mm wide, revolute.
Fruit: A globose berry. 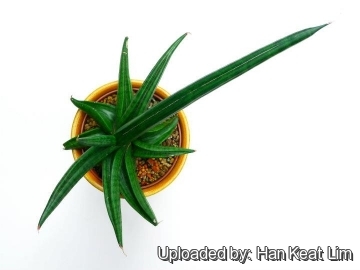 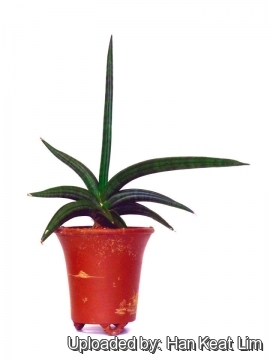 Cultivation and Propagation: Sansevieria patens are easy to cultivate but slow growing. They are fantastic potted plants that needs little care, particularly suited for larger pots and form large, slightly curved, fan-shaped rosettes in various orientations.
Soil: Use a soil mix consisting of 3 parts loam to 1 part of pumice. Always underpot sansevierias.
Moisture requirements: The plants are very drought tolerant and are watered about every other week during the growing season. During the winter months they are watered once a month. Water sparingly and not at all as temperatures dip in winter but can tolerate going months between watering.
Fertilization: They are fertilized once during the growing season with a balanced fertilizer.
Light requirements: Will tolerate low light levels but grows best and flowers if given bright light and even tolerates full sun. In the garden In mild to tropical climates it prefers semishade or shade and it is not fussy.
Hardness: Sansevieria patens will die if temperatures drop below 7°C with wet soil. However, it can survive near freezing temperatures if the soil is dry - but it is best to avoid freezing temperatures. If growing outdoors in frost free areas keep in a covered patio or under an area where plants do not receive winter rainfall.
Heat Tolerance: Excellent.
Propagation: Sansevierias are propagated by cuttings or by divisions taken at any time. Cuttings should be at least 10 cm long and inserted in moist sand. A rhizome will emerge at the cut edge of the leaf.