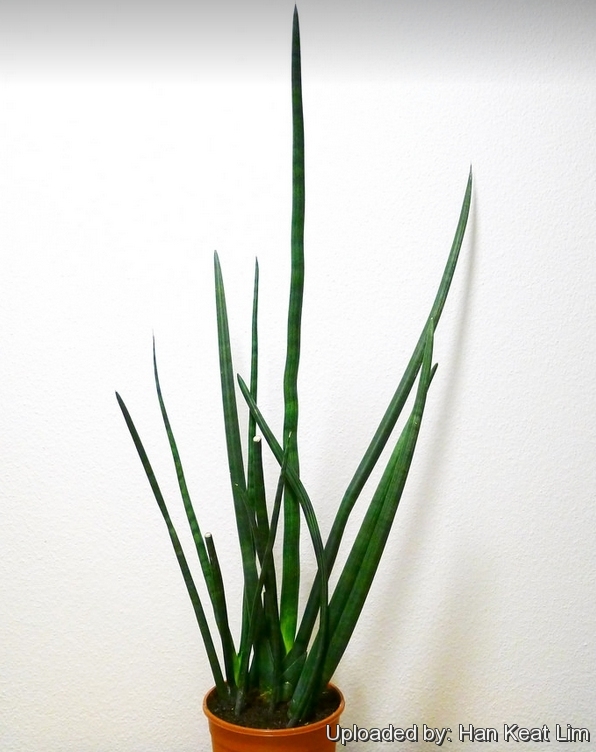 Origin and Habitat: Northern madagascar. Sansevieria canaliculata was described from a cultivated plant of unknown origin and it is not certain whether it is an African species introduced to Madagascar. It is also reported from Mozambique in the Cabo Delgado Province and in Tanzania.
Habitat end ecology: This species grows near the coast.

Description: Sansevieria canaliculata is a stemless succulent, growing in patches from a creeping rhizome. It is a cylindrical-leaved species with only one leaf on a growth, although occasionally two are found. The leaves are erect, straight, black 20-70 cm tall, with 5-6 longitudinal furrows. The inflorescence is 5-16 cm tall, hugging close to the ground. The long tubular flowers are white with a faint green tinge.
Rhizome: Creeping, rather slender, 1-1.25 cm in diameter, light brown.
Leaves: Solitary, or occasionally 2 together, sometimes arising from the rhizome close together one before another, sometimes 5 cm apart along the rhizome, leaf blade simple, erect or slightly curved, firmly flexible (not at all rigid), cylindrical or slightly laterally compressed, with 5-6 shallow longitudinal grooves and rounded rib-like spaces between them, 15-75(-90) cm long, 0.5-2 cm thick, of nearly the same diameter up to near the apex, or slightly thicker along the middle part, pale to dark green without markings, narrowed shortly to a whitish hard acute tip, surface almost smooth.
Inflorescences: Directly from the rhizome, 5-16 cm long, 3-4 mm thick at the base, (very short if compared with the leaf blade), simple, spike-like. Raceme lax on the upper part of stem with usually 3 flowers per cluster at the lower part, solitary at the top of the raceme, or occasionally in weak specimens all solitary, almost erect. Bracts 2-3 ovate-acute, on the lower half, 4 mm long whitish-brown membranous. Pedicels much shorter than the bracts (1-1.6 mm long), jointed at the apex to the flower.
Flowers: Bud pale greeish-pik. Flowers white tinged green. Tube 2.5 cm long, slender, slightly swollen at the base, white, tinged with green on the basal part. Free parts of lobes 17 mm long, linear, slightly broadening upwards, obtuse, white.
Chromosome number: 2n = 42.

Notes: The genus Sansevieria numbers about 60 species most of them native of Africa, it has been variously included in the Amaryllidaceae, the Liliaceae and the Agavaceae but is nowadays usually placed in the Dracaenaceae.

Cultivation and Propagation: Sansevieria canaliculata are easy to growing and tolerate a wide range of conditions. A great container plant that needs little care. Always underpot sansevierias.
Soil: Use a soil mix consisting of 3 parts loam to 1 part of pumice.
Moisture requirements: The plants are very drought tolerant and are watered about every other week during the growing season. During the winter months they are watered once a month. Water sparingly and not at all as temperatures dip in winter but can tolerate going months between watering.
Fertilization: They are fertilized once during the growing season with a balanced fertilizer.
Light requirements: Will tolerate low light levels but grows best and flowers if given bright light and even tolerates full sun. In the garden In mild to tropical climates it prefers semishade or shade and it is not fussy.
Hardness: Sansevieria canaliculata is theoretically hardy to -2° C, particularly when dry - but it is best to avoid severe freezing temperatures. If growing outdoors in frost free areas keep in a covered patio or under an area where plants do not receive winter rainfall.
Heat Tolerance: Excellent.
Uses: This species grows from rhizomes under the soil. All rhizomes of Sansevieria are edible.
Propagation: Sansevieria erythraeae are propagated by cuttings or by divisions taken at any time. Cuttings should be at least 10 cm long and inserted in moist sand. A rhizome will emerge at the cut edge of the leaf.