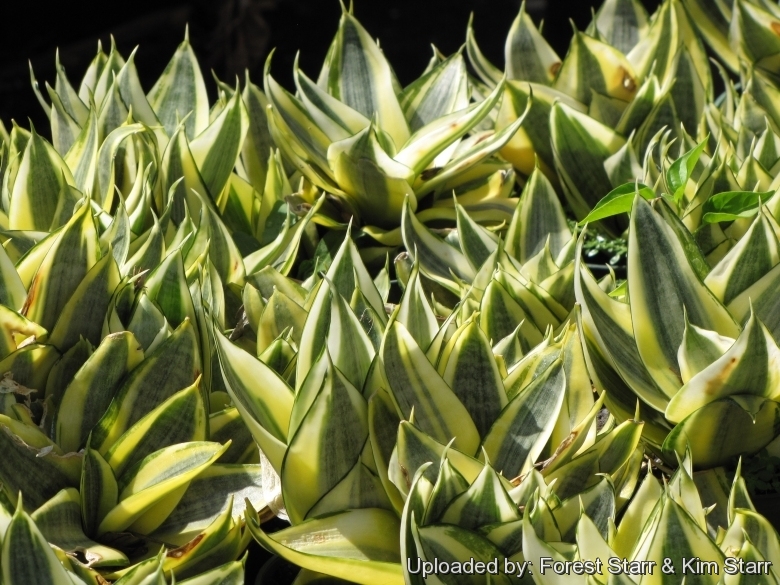 Origin and Habitat: Garden origin. The natural species is native to to tropical West Africa from Nigeria east to the Congo.

Description: Sansevieria trifasciata cv. Hahnii (a.k.a. Golden Hahnii or Golden Birdnest Sansevieria) is a lovely dwarf cultivar that is only about 15-20 cm tall. Its foliage is arranged in an attractive rosette, the leaves are darker green with a combination of marginal and internal creamy-yellow stripes of variable width/length which are parallel with the veins of the leaf. It also has a little bit of silver in the leaves. Its really awesome! This species can bloom in summer with sweetly fragrant greenish white flowers but this cultivar rarely seems to do so.
Habit: It is a stemless perennial succulent herb that grows rapidly outside, reproduces rapidly and spreads everywhere by way of its creeping rhizome forming dense stands.
History: Sansevieria "Golden Hahnii" was discovered by a grower named Sylvan Hahn, it was issued a plant patent (Plant Patent Number 1224) back in 1953.
Rhizome: Sympodial, sometimes above ground, sometimes underground, robust, and yellowish 1.3 to 2.5 cm thick.
Leaves: 2 to6, spreading, lanceolate and flat, tappering gradually from the middle or above, fibrous, fleshy, 10-15 cm tall, 5-7 cm wide, and channelled at the base, banded on both surfaces from base to apex, very distinct light dull green or clear whitish-green banded with deep grass-green to almost blackish-green. The leaf surface is smooth.
Inflorescence (raceme): Erect 40 or more cm high, loosely filled with three to eight fragrant greenish white flowers per bunch.
Fruits (berries): Globose, 8-9 mm in diameter, bright orange, and contain 1-2(-3) seeds.

Subspecies, varieties, forms and cultivars of plants belonging to the Sansevieria trifasciata group

Cultivation and Propagation: Easy to cultivate, Sansevieria trifasciata cv. Golden Hahnii, is a groundcover that grows pretty fast and spreads unlike the tall common Snake Plant (Sansevieria trifasciata), it's parent, which can grow up to 60-90 cm tall. It needs the same care as the standard Snake Plant, just make sure you take care in winter to keep rather dry or you can get root rot. It is a very drought tolerant plant, but not as cold hardy as some. It needs heat and dry air in Winter and half shade in Summer. Even this version is prone to suddenly rotting especially if exposed to excessive water, cold or a combination of the two. This plant is invasive in subtropical areas from zone 9a southward! It grows rapidly outside in full sun, reproduces rapidly and spreads everywhere. This is a good houseplant like most or all Sansevierias.
Soil: Use a well-drained potting mix consisting of 3 parts loam to 1 part of pumice.
Fertilization: They are fertilized once during the growing season with cactus plant food or half rate of 20-20-20.
Repotting: Transplant only when plant is pot-bound.
Watering Needs: The plants are very drought tolerant and are watered about every other week during the growing season, allow to dry somewhat between waterings. During the winter months they are watered once a month.
Exposure: Bright filtered light. Will tolerate low light levels but grows best and flowers if given bright light and even tolerates full sun. Afternoon shade in summer.
Frost Tolerance: Avoid any frost. This species is dormant in winter, keep it at or around 4°C.
Outdoors: In the garden In mild to tropical climates it prefers semi-shade or shade and it is not fussy.
Pests/Disease: Mealybugs and spider mites.
Use: It is a great container plant for interior or exterior use that needs little care. It makes a choice designer's architectural statement. It is popular as an ornamental plant as it is easy to culture and take care of in a home.
Propagation: They are propagated by cuttings or by divisions taken at any time. Cuttings should be at least 10 cm long and inserted in moist sand. A rhizome will emerge at the cut edge of the leaf. Variegated cultivars offspring will lack variegation if rooted from leaves.