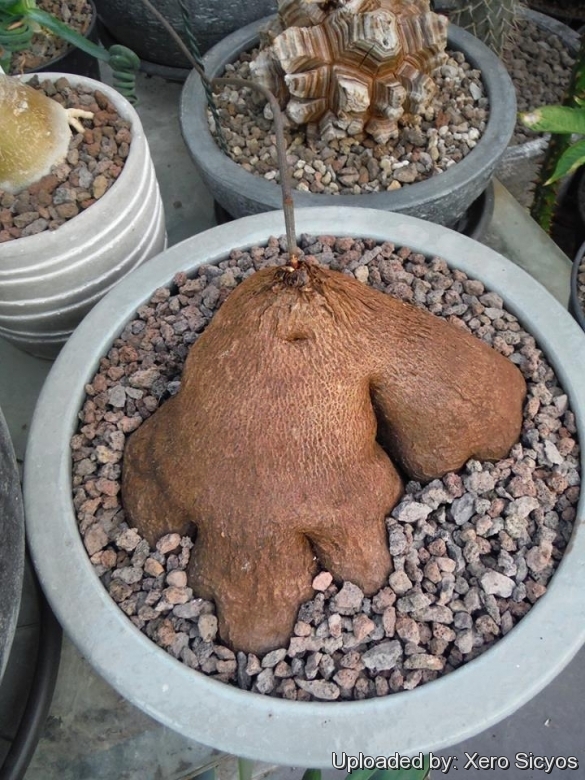 Origin and Habitat: Mozambique, Zambia, Zimbabwe, Swaziland, and South Africa (Eastern Cape, Free State, Gauteng, KwaZulu-Natal, Limpopo, Mpumalanga, Western Cape).
Altitude range: From near sea level up to 1800 metres.
Habitat and ecology: Dioscorea sylvatica grows in a variety of wooded and relatively mesic places, such as the moister bushveld areas, margins of forests, bracken or ericoid scrubs, Albany thicket, fynbos, grasslands, savanna, coastal bush and wooded mountain kloofs. It is quite frequent where it occurs but very slow growing (generation length estimated to be 30 years). There was a huge population decline from 1955-1960 as a result of indiscriminate commercial harvesting for diosgenin, a substance that was used to manufacture cortisone and other steroid hormones. Exploitation of tubers for the local medicinal plant trade is ongoing, and is preventing recovery. It is also threatened by the extreme pressure of pastoral grazing that is is changing the micro-habitat of the bush and possibly the decline of mature individuals is also caused by illegal overcollection of the tubers that are highly sought after by cudiciform collectors.

Description: The Elephant's Foot Yam, Dioscorea sylvatica, is a semi-tropical slender twining herb with annual stems growing from a massive, reticulated tuberous rootstock or caudex. The caudex that lie flat on the surface of the soil is divided into regular polygonal plates that become protuberant with age, divided by deep furrows. Vigorous, annual climbing stems can grow to as much as 4 or 5 metres in a season. Male and female flowers are borne on separate plants. Larger caudices rank as curiosities of the plant kingdom, and are eagerly sought after and admired by collectors of succulent plants.
Taxonomical notes: Dioscorea sylvatica is widespread and very variable and there are taxonomic problems with the different varieties. Now all the variants are assessed together as a single taxon, as the current poor delimitations of even such basic information as the distribution ranges of the different variants are making separate assessments extremely difficult.
Caudex (tuberous rootstock): The plants survive the dry season by means of a large underground tuber that develops very slowly and a seedling will eventually (in centuries?) become the size of an Elephant's foot (40-100 centimetres in diameter with an average tuber weight between 9 and 30 kg). If Dioscorea sylvatica is lucky enough to begin its life in rich soil, its caudex will remain mostly underground. In rocky and hilly situations, though, it will poke its caudex above ground. The caudex is quiet flat, wider than tall, irregularly shaped with "balconies" and forms a knobby, somewhat fissured, surface that somewhat resembles a multilobed pancake. The thick, woody outer layer of the caudex that aids in moisture retention and protection against predation also gives the plant great visual appeal.
Annual growth (vines): Vigorous, climbing, left-twining, growing to as much as 4 or 5 metres in a season.
Leaves: Alternate, deltoid, deeply cordate, shallowly 3-lobed, 5-8 cm long and broad, often almost appearing 2-lobed at the base, tapering to a long point at the apex; apical mucro 3-4 mm long.
Inflorescence: Flowers in lax, pendulous racemes up to 12 cm long, creamy white to very light green.
Male: Simple, shortly peduncled, 5-7.5 cm long. Pedicels 3-4 mm long, erecto-patent or patent with a small deltoid bract at the base and usually a bracteole at the middle. Expanded flower 4 mm in diameter. Segments oblanceolate, obtuse. Stamens much shorter than the perianth-segments.
Female: Female flowers in lax simple racemes, pedicels shorter than those of the male flowers, ovary linear-oblong, 6-8 mm long.
Flowering time (in habitat): November to February.
Fruit (capsule): Obovate, 4-winged, less than 2.8 cm long and 2 cm across. 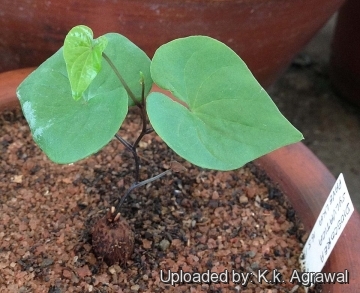 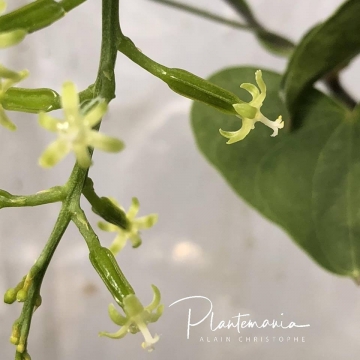 Cultivation and Propagation: Dioscorea sylvatica responds well to cultivation and makes an easy and wonderfully unusual houseplant. Plants even five to ten years old are extremely nice. Vigorous, annual climbing stems can grow to as much as 4 or 5 metres in a season, however these can be trained quite comfortably around a wire hoop set in a pot when grown indoors.
Exposure: It prefers light shade, but keep the caudex in the shade.
Waterings: It needs moderate to regular water. Slow down or withheld water when the tuber is dormant in summer (after shedding its leaves). It will start growing again in Autumn. Watering can recommence once the plant has shown signs of producing a fresh shoot. Sometimes it ignores its proper growing seasons (from autumn to spring ) and keeps its vines growing long into its rest period, or sends up new vines much earlier than expected. In that case, paying attention to the plant and not the calendar is a good idea.
Hardiness: It is easy to grow if a winter temperature of 5° C can be maintained.
Medical uses: Poisonous. Antibacterial, for wounds, sores, mastitis, abscesses. Dioscorea sylvatica contains diosgenin, a substance that was used to manufacture cortisone and other steroid hormones. It also shows antibacterial activity: extracts of D. sylvatica (tuber bark) have shown antibacterial activity against Escherichia coli. D. sylvatica may produce mild inflammation and itching when rubbed on the skin, with cutaneous reactions caused in part by raphides of calcium oxalate.
Propagation: Seeds, difficult from cuttings. Sow seeds 5mm deep and keep them warm. Sprouts best in indirect light. The seedlings' caudex forms below ground and will grow much faster if left underground for a couple of years.