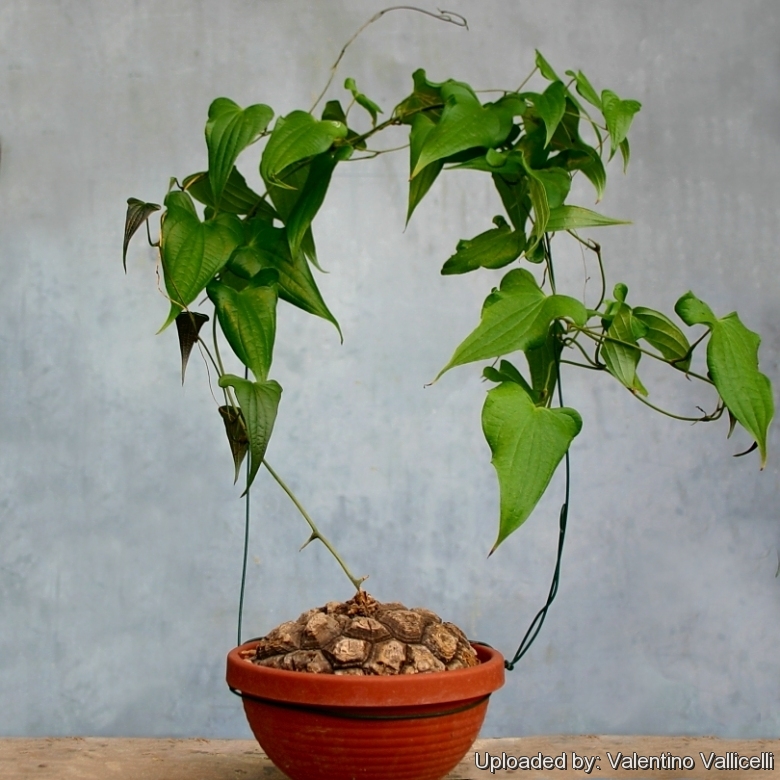 Dioscorea mexicana Photo by: Valentino Vallicelli
The vines grow annually from the caudices of Dioscorea mexicana . The broadly dome-shaped, plated and fissured caudex may reach 90 m in diameter and perhaps 30 cm in height. These caudiciform is very slow growing and can live for centuries.

Description: Dioscorea mexicana is a small variety very close in appearance to Testudinaria elephantidens. It has leafy annual stems with an above-ground persistent caudices that lie flat on the ground and can make an interesting container plant.
Caudex: The large and partially exposed tuberous stem, is woody-looking but succulent within and outer layer of the caudex is covered with thick greyish-brown bark that aids in moisture retention and protection against predation also gives the plant great visual appeal. The caudex is divided into superbly sculptured regular polygonal plates that become protuberant with age, divided by deep furrows it can reach 90cm in diameter with a height of nearly 30cm above ground (but usually don’t exceed 50 cm of width) The tubercle-covered tuber, resembling an elephant's foot or a tortoise shell.
Stems: Testudinaria Mexicana puts out from the top of the caudex a rather startlingly vigorous vine in late spring that may grow to more 6 m before it dies back in winter. The vines reaches 6 m and grows rapidly during the growing season but usually dies back in the winter.
Flowers: Inconspicuous, small (up to 2 mm wide) purplish in clusters.
Blooming season: August.

Notes: It takes the name Tortoise plant from the appearance of its large caudex which grows very slowly. This is one of the most interesting Dioscorea’s species for the depth of the furrows and knobbyness and geometrical regularity of the caudex. 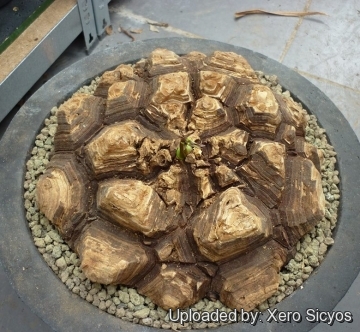 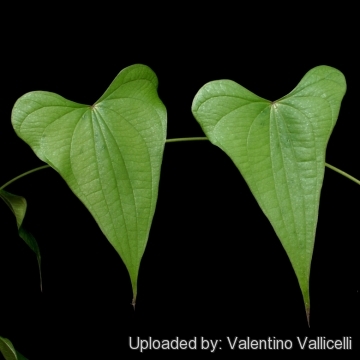 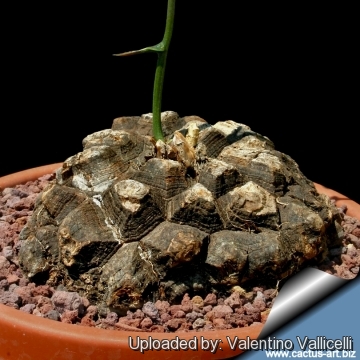 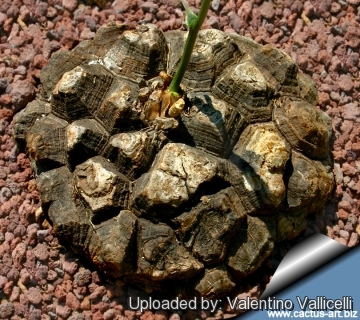 Cultivation and Propagation: This species has about the same cultivation requirements of T. elephantidens, it is very easy to keep, even being suitable for beginners, as it is robust and can even withstand longer periods of being dry.
Place the tuber on a large pot with very draining soil, and keep this slightly moist. Some time after its rest period it will start to form roots. At this point a little more moisture should added to the soil. The roots can grow up to 10cm per day. The massive caudex of Dioscorea mexicana roots only from its sides, not its bottom. Consequently, someone who raises the caudex in a container to display it better runs the risk of having a plant that will never make roots and will eventually dry up and die. The long shoots are suitable for training on trelliswork and hoops. If the plant grows too vigorously, pinch the top shoot back to the required length. Prefers a light spot but also does well in half shade. Sometimes it ignore its proper growing seasons (from spring to autumn) and keep its vines growing long into its rest period or send up new vines much earlier than expected. In that case, paying attention
to the plant and not the calendar is a good idea. Plants even five to ten years old are extremely nice.
Propagation: Seeds. Sow seeds 5mm deep and keep warm. Sprouts best in indirect light. The seedlings caudex forms below ground and will grow much faster if left underground for a couple of years.