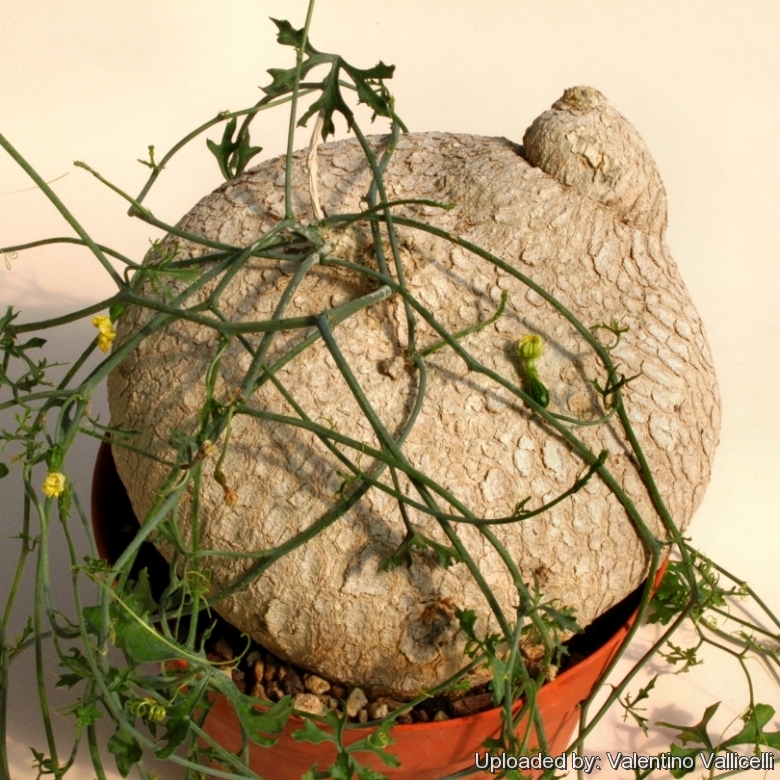 Origin and Habitat: It is limited to the sonoran zone on both sides of the Gulf of California. It ranges across Sonora into Baja California, Mexico. In Sonora it is common from Navajoa to Alamos.
Habitat: It grows in open habitats at low elevations in the sonoran desert in sandy plains, canyon bottom, north- and south-facing canyon slopes, and nearby desert, especially along washes.
Its thick water-storing caudex is generally discovered in shade beneath shrubs and trees, and also under giant barrel cactus (Ferocactus diguetii), pitahaya agria (Stenocereus gummosus), and Cardón (Pachycereus pringlei). The vines grow up through the plant under which they grow. The plant is able to persist in its arid habitat with remarkable vitality.
The Sonora desert is home to succulent flora and is particularly rich in local endemics such as: Echinomastus unguispinus, Coryphantha valida, Echinocactus horizonthalonius, Echinocactus ingens, Glandulicactus uncinatus, Echincereus pectinatus, Echinocereus stramineus, Turbinicarpus klinkerianus, Mammillaria candida, Mammillaria elongata, Mammillaria parkinsonii, Lophophora diffusa, Echinomastus unguispinus, Ferocactus echidne, Stenocereus thurberi, Opuntia tapona, and Opuntia cholla.
Ecology: Fruits are eaten by lizards and other animals.

Description: Ibervillea sonorae is a spectacular perennial desert plant relative of the cucumber with climbing vine and a large caudex, it produces yellow flowers in summer and little bright miniature red-orange melons in autumn. In the dry season if you see this plant in the desert, you see only a dried chunk of loose wood often resembling a large cow dropping or weathered rock. It has neither roots nor stems. But it is alive. Each year before the rainy season comes, it sends out a few roots downward and shoots upward. If the rain arrives, it grows flowers and fruits. While in many years, when no rain arrives, the ephemeral vine are absent patiently waiting for the next thirst-quequing rain.
Habit: Geophyte twining vine, the vine part is mostly annual and deciduous.
Caudex: Up 60 centimetres in diameter, thick, globose to bottle-shaped, partly exposed above ground or subterranean. Frequently irregularities of shape give it the effect of stone..
Yearly stems: Herbaceous, slender, flexible, liana-like up to 3 metres or more long. The shoots are round, smooth, glabrous and green above, brown grey and grey-spotted or streaked
below. Every autumn the shoots die back and sprout again early in the spring.
Tendrils: Branched.
Leaves: 4-10 cm wide, palmately divided, orbicular to ovate in outline, irregularly lobulate even in the same plant, with 3 primary lobes and 7-9 secondary lobes as is so frequently the case throught the family, bright green, to glaucous green and glabrous, sometimes whithis on the lower face
Flowers: Diurnal salver-form. This Ibervillea is dioecious, there are male and female plants, and both are needed to get viable seeds. Male flowers (staminate) about 15 mm long, yellow, glabrous in racemes, tubular, to 8 mm long, hypanthium narrowly cylindric. Petiole spreading, 4-5 mm long villous.
Female flowers (pistillate) solitary, small, looking like they have growing from a miniature zucchini.
Blooming season: The flowers coming throughout most of the summer. The fruit becomes red as it ripens.
Fruits: Globose plum-sized berries, 3-5 cm in diameter, green, white-striped, becoming reddish when ripe, smooth, several-seeded. Fruits mature during several successive seasons of severest drought.
Seeds: Rounded at the large end.

Subspecies, varieties, forms and cultivars of plants belonging to the Ibervillea sonorae group 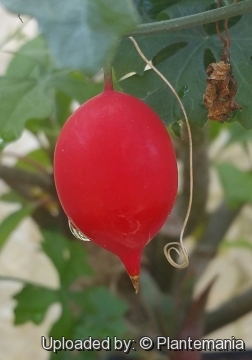 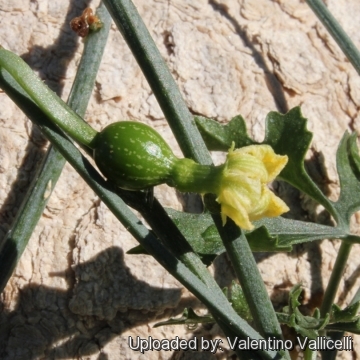 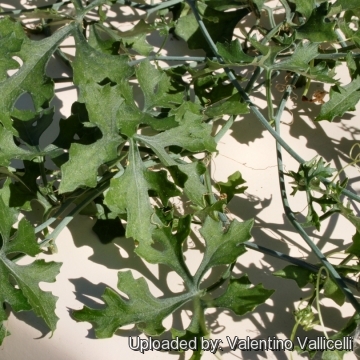 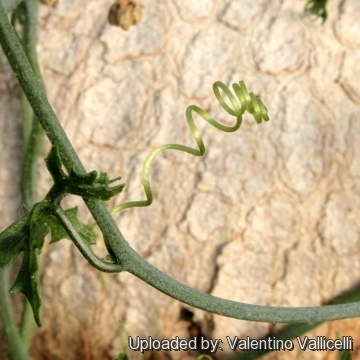 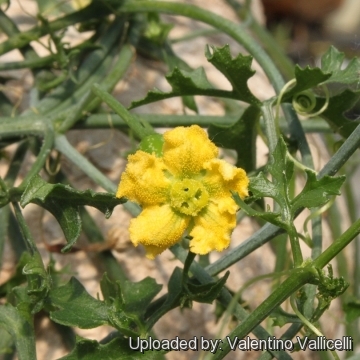 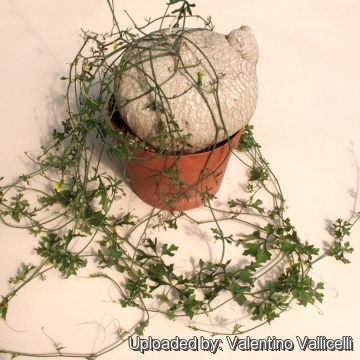 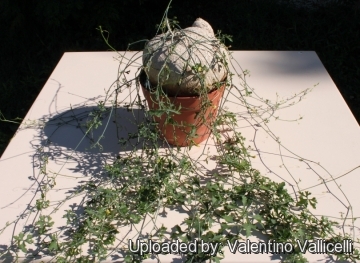 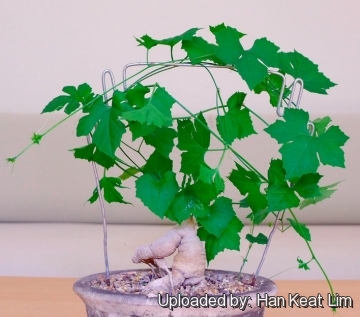 Cultivation and Propagation: This plant is suited to greenhouse culture, but does well out of doors in Mediterranean climate, it responds well to cultivation and can eventually make a wonderfully unusual houseplant. Indoors they are often grown in shallow pots, with a tuft of wining stems emerging from a bulbous stem that seems to erupt from the soil. It is a plant for people who don't want a lot of work taking care of their plants, as it seems to thrive on neglect. Plants even five to ten years old are extremely nice.
Growth rate: The plants are very slow growing, so don't expect great growth spurts from year to year.
Growing substrata: Grows in a rich, very well drained, preferably stony and drained soil mix.
Watering needs: It is very drought tolerant, water deeply but infrequently in summer. It doesn't like a wet winter when the tuber is dormant (after shedding its leaves), but will survive. Over-watering is the most frequent cause of failure when growing Ibervillea, and should be kept on the dry side. It will start growing again in Spring. Watering can recommence once the plant has shown signs of producing a fresh shoot. Sometimes it ignores its proper growing seasons (from spring to autumn) and keeps its vines growing long into its rest period, or sends up new vines much earlier than expected. In that case, paying attention to the plant and not the calendar is a good idea.
They are pretty resistant to rotting if all other conditions are good.
Fertilization: Fertilize them only once during this period.
Exposition: Keep the root in the shade, light shade to full sun for the vine.
Hardiness: When it drops its leaves protect from frost and stop watering. It is hardy to -7 degrees Celsius if kept dry. However warmth throughout the year will increase the grower's success (at temperatures from 5 to 10 degrees centigrade during rest season).
Maintenance: Remove the spent branches. Leaf tips have a tendency to dry and be brown in the house, so if possible place it outside in the summer.
Pest and disease: Bugs, mealy bugs and mites usually are not a problem with the Ibervillea, however if they do appear, simply spray the houseplant down with a soapy water mix twice a day until they are gone.
Traditional uses: Ibervillea sonorae's root, or “wareque”, is widely used in Mexican traditional medicine for the control of diabetes mellitus.
Propagation: Propagates usually from seeds that must be sown in the spring and will germinate at about 20° C. The seedlings' caudex forms below ground and will grow much faster if left underground for some years. It's also possible to make cuttings.