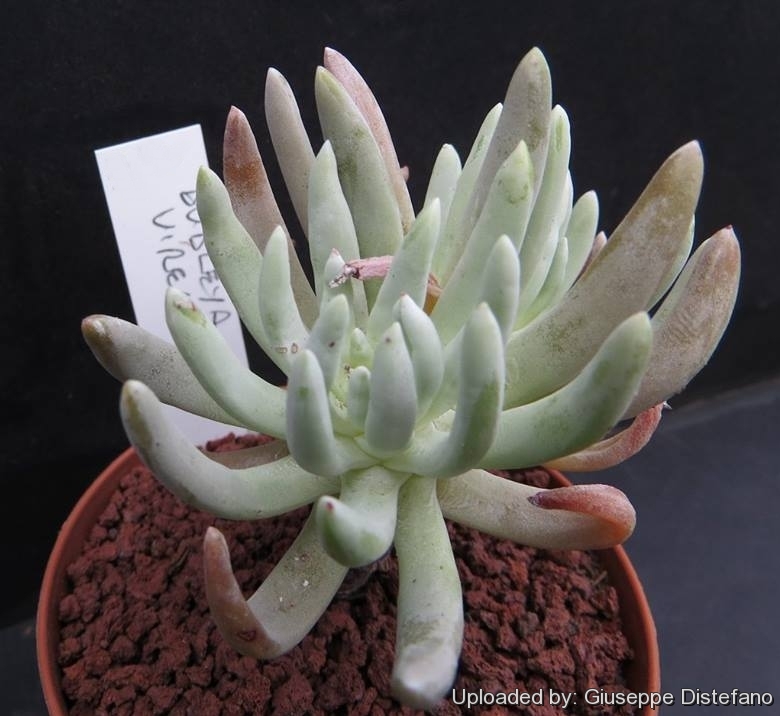 Subspecies, varieties, forms and cultivars of plants belonging to the Dudleya virens group

Cultivation and Propagation: This slow growing specie is seldom grown and forms colonies and thus makes an attractive small-scale ground perennial cover where winters are mild and summers dry. It is also grow it as a house or conservatory plant in a porous mix. Dudleyas are hardy in USDA Zoned 9-12, the plant is highly heat and drought tolerant during the summer months and prefers moist cool winters. Powdery white leaves make these plants standouts, but avoid touching them as they are easily and permanently marked by finger marks. All of the plants in the Dudleya genus are known to live up to 100 years.
Soil: They do best in very well-drained, sandy or gravely soil. As an ornamental it is also grown in containers where it stays smaller than its outdoor brethren. In pots they need a very porous mix soil (e.g. 2 parts peat moss to 1 part loam to 1 part of pumice). It is typically found on coastal bluffs and has been found to be tolerant of heavy soils in garden settings.
Exposure: It requires ample sun, but provide midday shade where summers are hot. The quality of light is much more important than the quantity, the plants contain farinose powder which makes them really effective for ultraviolet reflectivity. Low light situations might be stressful and create a susceptibility to mealy bug infestation.
Watering: Dudleyas are summer-dormant winter growers that require fresh air, exceptionally well- drained soil, and no summer water—even though they may appear drought stressed because their outer leaves dry and curl inward. (provide water in spring and autumn). In the summer the roots are unable to absorb the water so any excess of water simply rots them because of their dormant state.
Maintenance: Remove spent flower stems for appearance. The older leaves of Dudleyas wither but remain attached to the stem. Whether or not they should be removed is disputed, but they provide a hiding place for pests and some growers preference to remove them.
Uses: It will last a long time with little care and can become a beautiful pot plant with pretty inflorescences with the right care. It is a beautiful addition to a rock garden or any place with limited soil depth.
Propagation: Dudleyas has been found to be propagated through both seed and vegetative, although vegetative propagation by offsets in spring or early summer is not only more popular but it is much easier to do. Dudleya should be planted at an angle. This prevent s the buildup of water in the leaves, which may lead to the leaves rotting. The vegetative propagation process needs to be done with temperatures reaching 21 degrees C. Let dry the cutting for about five to ten days and put the the cutting into the rooting compost (2 parts perlite and 1 part cactus potting mix). After finishing this you then place the pot in a warm, sheltered, but very bright filtered light area with no direct sunlight, you do not want the leaves to dehydrate. During the rooting period make sore to limit water, the rooting will take around 2 weeks, after roots transplant into the growing container. One thing to remember when rooting cuttings, overhead watering is not good for it, apply only to the soil line. The seeds do not need to be covered but do need a moistened soil for germination. Placing them into a mist house at an optimal 20-21 degrees Celsius with sufficient lighting resulting in germination. Germination occurs in just two weeks.