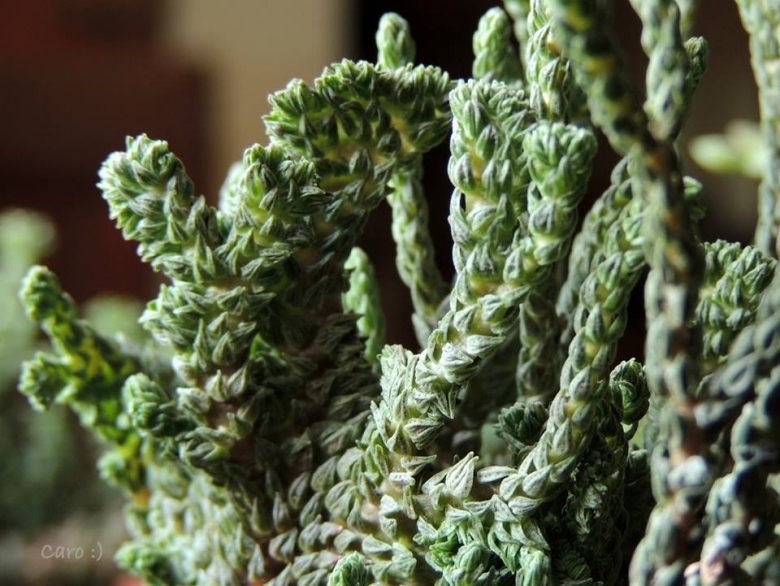 See all synonyms of Crassula muscosa
back

Subspecies, varieties, forms and cultivars of plants belonging to the Crassula muscosa group 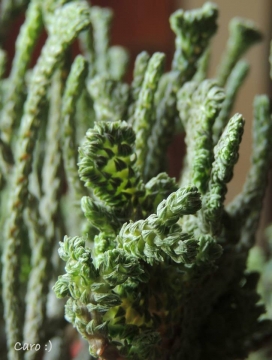 Cultivation and Propagation: Crassula muscosa (syn: Crassula lycopodioides) is easy to grow under a wide variety of climatic conditions provided it is planted in a well-drained situation given adequate water but not over-watered. It is always a good standby for the rockery, colour of the leaves is often yellowish green. This species is very hardy and seems to stand fairly severe frosts at times. Flowers are small and insignificant.
Growth rate: It is a pretty slow grower.
Soil: Plants grow well in a well-drained mineral soil.
Pots: It needs a relatively shallow pot to accommodate its fibrous roots and provide a very good drainage. It may stay in the same pot for many years.
Watering: It is an opportunistic grower that needs moderate water year around– not too wet nor too dry from autumn to spring with regular water in summer (careful watering required in winter), fairly drought tolerant elsewhere.
Fertilization: Light fertilizer seems to boost its growth whenever additional water is given. Feed it during the growing season with a fertilizer specifically formulated for cactus and succulents (high potash fertilizer with a dilute low nitrogen), including all micro nutrients and trace elements diluted to ½ the strength recommended on the label. It thrive in poor soils and needs a limited supplies of fertilizer to avoid the plant developing excess vegetation, which is easily attacked by fungal diseases.
Special need: Provide very good ventilation. Nearly all problems occur as a result of overwatering and poor ventilation, especially when weather conditions are dull and cool or very humid.
Exposure: It cannot take direct sun in summer but generally needs sun part of the day to bloom. In deep shade it gets pretty weak and leggy and eventually rots and dies.
Pest and diseases: Crassulas are sensitive to mealybugs. Protect against frost.
Maintenance: After growing for several years tend to become untidy, and should be cut very short or restarted from cuttings.
Hardiness: Outdoors in frost free areas, indoors all other zones
Propagation: Seeds/ Stem cuttings. Sow seeds in autumn. Plants root easily from cuttings, place cuttings in clean river sand, mist every three to four days, roots should appear within 2-3 weeks.