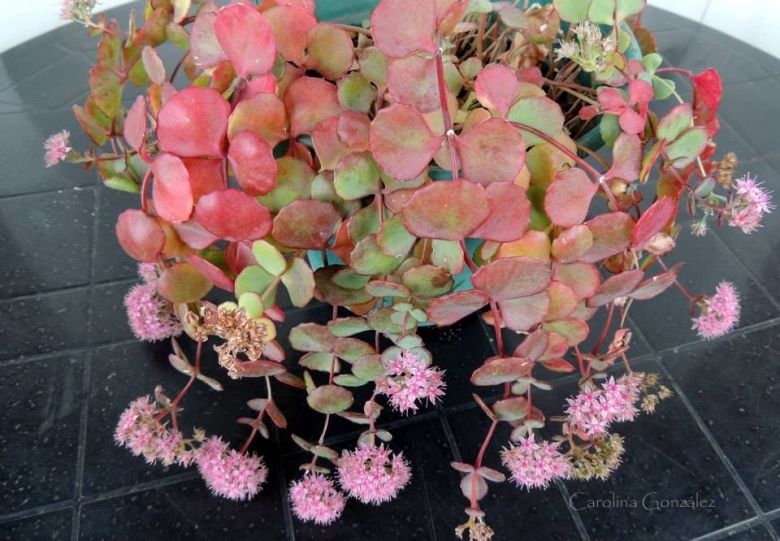 Description: Sedum sieboldii, sometimes called October daphne, is a trailing deciduous perennial succulent plant, well-distinguished by its creeping stems clad in blue-grey leaves. It is outstanding where the autumn season is long and mild, bearing showy heads of bright pink flowers at the tips of the low-arching stems. It is one of the latest-blooming of the low-growing sedums. But unfortunately the plant has a resting period and during winter it dies back to the rootstock. However, it plays its part well during the rest of the year. There is also a variegated form with most of its leaf area in a lovely creamy yellow (see: Sedum sieboldii cv. Mediovariegatum).
Derivation of specific name: The specific epithet sieboldii commemorates Philipp Franz von Siebold, a notable plant collector of the 19th century.
Stem: Delicate, unbranched, not rooting, slightly succulent to 25 cm long, emerging from a central root stock or short rhizome and bent down in a fountain-like form.
Leaves: Arranged in whorls of 3(4) around the stems, sessile, obovate to fan-shaped, 1.3-2.5 cm long, 1.3-2 cm wide, blue-green coloured, the margins erose-sinuate. When the plant flowers the foliage often becomes tinged with dark red or purplish hues.
Inflorescences: Many flowered, panicled cymes 2-7 cm across, at the tips of ascending, arching or pendulous stems, 15-30 cm long.
Flowers: Short stalked, ca. 12 mm across, pink to scarlet, sepals deltoid, acute, pilose, blue-green and united at the base. Petals lanceolate, pointed and spreading, carmine-rose. Stamens spreading, the one opposite to the petals equalling them in length, the alter­nate ones slightly longer all with pinkish filaments and purple anthers. Pistils pink, upright, broadly ovate, narrowed at the base into a distinct stalk. Carpels erect, green with red streaks when mature.
Blooming season: September to October.
Chromosome number: 2n = 50.

Subspecies, varieties, forms and cultivars of plants belonging to the Sedum sieboldii group 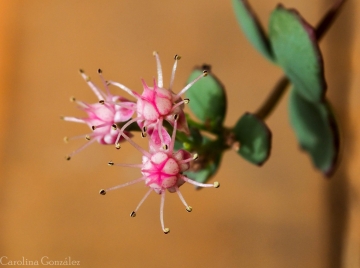 Sedum sieboldii Photo by: Carolina González
Send a photo of this plant.

Cultivation and Propagation: Sedum sieboldii is always an interesting plant and very easy to grow as a greenhouse plant and is very popular as a cottage window subject. It is quite hardy out-of-doors and and in the rock garden. It is tough, sun and drought tolerant, but also will do well in shade. The stems flow prettily over the edge of any bowl in which the sedum is planted or placed.
Soil: Require a well drained succulent soil mix. Outdoors it will spread itself through narrow locations between rockery stones. It does not prefer rich loamy soil; gritty dirt with pea gravel suits it.
Watering: t takes little water & could rot if watered too often. During the growing season, the plants are watered and allowed to dry slightly before watering again. Although they can take a great deal of drought, they seem to do better with regular (but moderated) watering and it is best to refrain from watering it until the rootball has dried out completely.
Exposition: It need full sun to light shade and tolerates shade, but a sunny spot is nicest, though in warmer climates it needs protection from too much sun because it is not very heat tolerant.
Frost Tolerance: Hardy at least to -12°C (or less).In very cold areas it must be protected in the greenhouse over the winter.
Propagation: Division of plant made in spring or cuttings in summer.
Warning: Sedums may causes stomach irritation if ingested; skin irritation from sap contact.