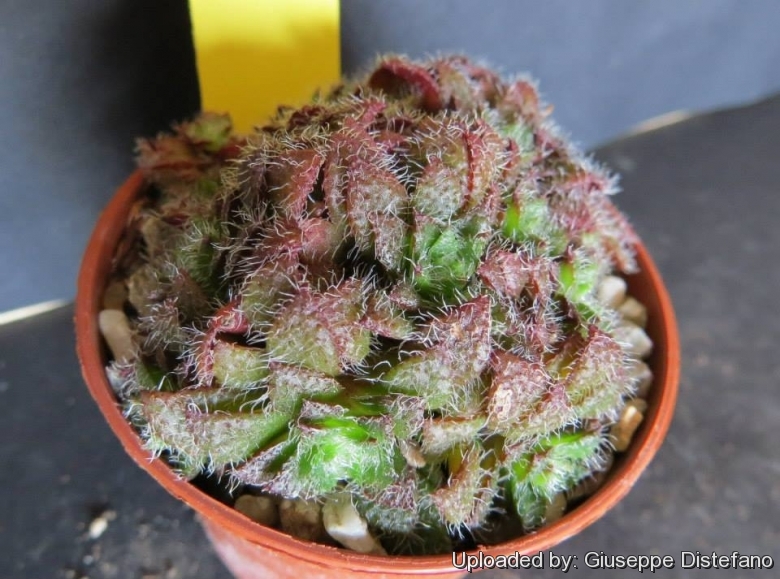 Description: Crassula setulosa is a small to robust, perennial succulent herb, that produces attractive tiny rosettes of fleshy, oval leaves usually less than a centimetre in length which are fringed with white small bristles (leaf margins). It forms very dense cushions or mounds sometimes up to 40 cm wide and 5-10 cm high (25 cm in flower), sometimes shortly stoloniferous. Crimson buds open into small, white or reddish flowers in summer. Flowers develop into small capsules which release fine dust-like seed. The whole plant generally clothed with spreading bristles; but the larger leaves sometimes quite bare; sometimes clothed on one side only. This species is exceedingly variable especially with regard to its leaves which vary in size, shape and hairiness with several different variety or forms, which, however, run into one another, some of them certainly mere variations without taxonomical value. There are five recognized varieties: the nominate variety, Crassula setulosa var.jenkinsii, Crassula setulosa var. deminuta, Crassula setulosa var. rubra and Crassula setulosa var. longiciliata.
Derivation of specific name: The name refers to the leaves being covered in small bristles.
Stem: Herbaceous more or less woody towards the base, slender, simple or branched from the base (thus seeming many-stemmed and caespitose) erect to prostrate, rooting, sometimes pendulous, rigidly hairy and to 23 cm tall and upright when flowering (usually shorter, sometimes dwarfed).
Roots: The root system is adventitious.
Rosettes: Very densely packaged, tiny, grey-green usually not more than 2.5 cm tall and 30-38 mm wide, each with about 2–10 leaf pairs close together. In winter the leaves are tinted bronze.
Leaves: Basal leaves in pairs, 4-ranked or densely packed in a rosette old leaves remaining on the stem. Blade membranous to slightly succulent, lanceolate, elliptic, oblong to oblanceolate 6-20(-35 mm long, (l-)2-10 mm wide, acute to pointed, flattened to more or less convex below but usually flat or channeled above, green tinged red, hydathodes present on margins and upper surface, hairy to hisoid on one or both surfaces and ciliate, (or glabrous except the margin). The margins entire, red-rimmed, minutely bristly to rigidlyciliate. Upper leaves (in the flowering stalk) sessile, lanceolate, hairy, opposite, reduced towards top.
Inflorescence:A few-or many-flowered, branched, hairy, terminal umbel with one to several dichasia with pedicellate flowers, with indistinct peduncles covered with triangular leaf-like bracts gradually shortening upwards.
Flowers: White to pale yellow-green inside, greyish-pink outside, with purple stripes, pendulous. Sepals triangular to lanceolate, 1-3 mm long, with or without marginal cilia and rarely covered with hairs, more or less fleshy, green to sometimes tinged red. Corolla tubular, fused basally for 0,4-0,6 mm, white often tinged red. Petals sub-connate at base, 2.5-4 mm long, oblong, acute or rounded, more or less recurved contracted in the middle white tinged red, with a projection. Stamens 2-3 mm long, anthers yellow or yellow-brown. Style shortly subulate one to two-thirds ovary length. Squamae almost square to oblong, rarely transversely oblong, 0,2-0,4(-0,8) x 0,3-0,7, mm truncate or emarginate, slightly constricted downwards, fleshy, yellow to orange.
Blooming season: Flowers Summer ( Late November until April in South Africa).
Fruits: Follicles (1.5)2-3(3.5) mm long (with the styles).
Seeds: Fine dust-like, about 0.5 mm long, subcostate-tuberculate.

Cultivation and Propagation: Crassula setulosa is a dwarf attractive flowering cushion succulent that needs more shade than others in the family, however it can tolerate full sun (where it stay compact) but a much better exposure is shade to light shade. It is an attractive plant in the garden when used in mass or in pockets within a rock garden and living walls and also is an easy to grow houseplant; always a favourite carefree windowsill citizen, an excellent addition to any dish garden.
Exposition: Likes light shade to part sun (it will take a few hours of sun without a problem), but adapts very well to shade too. Likes a bit of shade for best colour in leaves. It can overwinters well also under grow lights in a cool room of the house.
Soil: Although it needs a soil that is gritty and porous with good drainage, the soil must be able to hold the moisture that the plant requires. The ideal soil should contain equal parts of loam with small gravel added (e.g. pumice or lava grit). Good drainage is essential.
Watering: During the summer growing period the plant appears to need much more water than the average succulent. Water when plant is dry and do not water again until the soil is completely dry again. Dislikes over-watering. Pay particular attention to make sure that they do not rot at the root from soggy soil. In a very humid situation in winter, it can rot even if totally dry. It likes dry air as much as dry soil.
Fertilization: Fertilizer should be applied only once during the growing season, diluted to ¼ the recommended rate on the label. During October to March, water very sparingly, using only enough water to keep the foliage from shrivelling.
Hardiness: It requires low temperature for flower formation and it will not flower unless it is overwintered for at least a month at 15° C or less. It is usually recommended to avoid freezing temperatures, but it can withstand temperatures down to below -5° C (or less) for short period if dry.
Pests and diseases: The tightly-packed rosettes are attractive to mealy bugs.
Uses: Perfectly suited for planting in gravel gardens, paved areas, rockeries and small containers. Try mixing with other succulents and alpines.
Uses and cultural aspects: There are no known uses for this plant.
Propagation: It is is propagated by the division of offshoots, rooted in sand or in dry vermiculite, and seed.