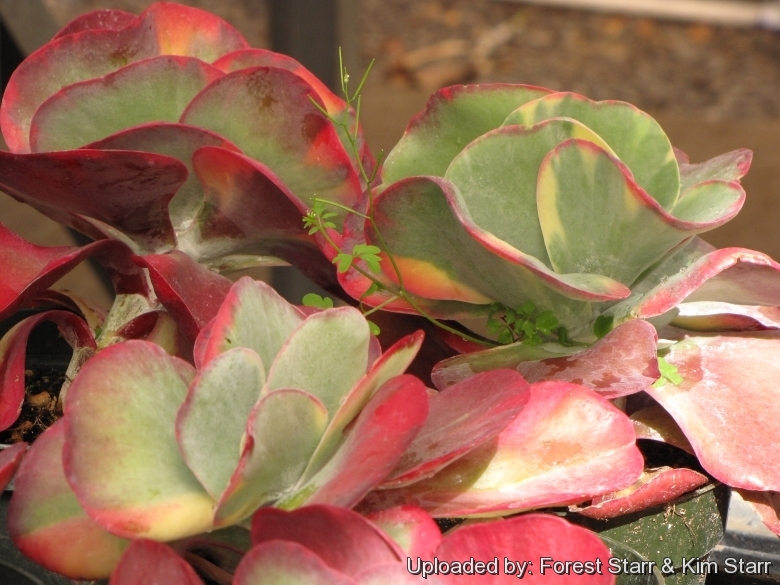 Description: Kalanchoe luciae 'Fantastic' (Variegated Paddle Plant) is a variegated cultivar characterized by a collage of bright foliage colours. Laves are greyish-green, with creamy-yellow or white parts comprising 30%-80% of the leaf surface and the leaf margin takes on a reddish hue in full sun or a dry environment especially during cooler winter months, otherwise the leaves remain green. The amount of sun exposure affects how much red blush the leaves exhibit. Like Kalanchoe luciae, the species it is derived from, this plant forms a slender, cylindrical inflorescence with pale yellowish-green flowers in early spring.
Remarks: This plant is often labelled with the wrong name Kalachoe thrysiflora 'Fantastic'. To create more confusion there is also a similar Dutch cultivar of Kalachoe thrysiflora (Kalachoe thrysiflora 'Variegated Desert Rose') that had a patent application submitted in 2004.
Habit: Kalanchoe luciae is a perennial or biennial, rosette-succulent plant solitary or forming a clumps of about 60 cm wide from a slightly swollen branched rootstock, at time of flowering each mature rosette develops a single robust stem, curved at base, then erect and straight, terete or sub-4-angled, to (0.5)1.5(-2.5) m tall, up to 2 cm in diameter at base, finally leafless below and marked there by the very close scars of fallen leaves, leafy upwards. The whole plant is completely glabrous but covered with a white mealy layer falling off with the age.
Leaves: Sessile, decussate, semiamplexicaul, shortly connate and each decurrent in two raised lines down the stem, entire, rounded, truncate, or scarcely sinuate. Basal ones 6-18(23.5) long, 5.5-15 cm wide, subcircular or obovate to oblong-spathulate, contracted into a very short and broad subpetiolar base (up to 3 cm. broad), very dense, spreading; median leaves 3-5-9 long 3-3-5 cm wide, oblong to spathulate more scattered, the uppermost ones smaller; lower internodes short (the shortest ones about 2 mm long), the median ones increasing to about 16 cm clasping, flat or almost so, glabrous or hairy, grey-green to yellowish green with creamy-yellow or white variegated pats and tinged red on the margins.
Inflorescence: The inflorescences arising from the rosettes of leaves formed in previous year, is a slender, tubular dense, continuous or interrupted, panicle-like thyrse 30-60 cm long, about 6.5(-14) cm in diameter, usually with many scorpioid, opposite, axillary dichasia ending in monochasia without a distinct peduncle. Leaves of the flowering axis bract-like, oblong, shorter than the cymes. Pedicels up to 10 mm long.
Flowers: Erect, shortly pedunculate, upright, tubular, white or pale greenish-yellow. Calyx with triangular to ovate lobes ( sepals) 3-6 (-7) mm long, 2-4 mm wide. Corolla tube more or less quadrangular, urnshaped, 6-10 mm long and ablout 8 mm in diameter at the middle, very contracted just below the limb, pale yellowish green, sometimes covered with a slight grey-white bloom, corolla-lobes oblong, 4-6 mm long acute or apiculate, pale yellowish green, at first suberect, finally reflexed. Filaments 4 or 5 mm. long (at fruiting time). Anthers 0,8-1.5 mm long reddish, exserted. Squamae oblong, square to transversely oblong, 2-2,5 mm long, usually truncate. Styles 2.5-3.5 mm long, exserted.
Blooming season: The single long stem arises in late winter or early spring.
Fruit (follicles): 7-11 mm long.
Seeds: 1,3-1,5 mm long.

Subspecies, varieties, forms and cultivars of plants belonging to the Kalanchoe luciae group

Notes: Kalanchoe luciae has commonly been misidentified as Kalachoe thrysiflora which it resembles.
In March-April 2001 issue of the Cactus and Succulent Journal this confusion of names is discussed in an article by John Trager with a picture of the true Kalanchoe thyrsiflora. The article notes that:
"The plant commonly distributed under this name Kalanchoe thyrsiflora, sometimes with the whimsical common name - coined by one enterprising nurseryman - of "flipping flapjacks" is in fact the related K. luciae ssp. luciae. Both species bear the fleshy, paddle-like, obovate leaves to which the common name refers. Those of K. luciae blush deep red, especially with cool winter temperatures. Those of K. thyrsiflora are more uniform chalky green or white, covered with a thick flour-like coating of wax. The flowers of the two species also differ. Those of K. luciae are not strongly scented and have an urnceolate flower tube with pale-yellow lanceolate corolla lobes. Those of K. thyrsiflora are heavily sweet scented with a cylindric flower tube and brilliant yellow broadly obovate lobes." 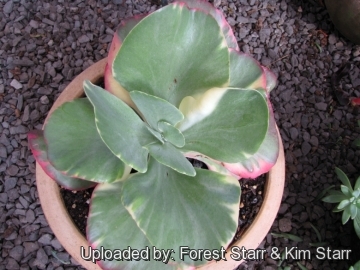 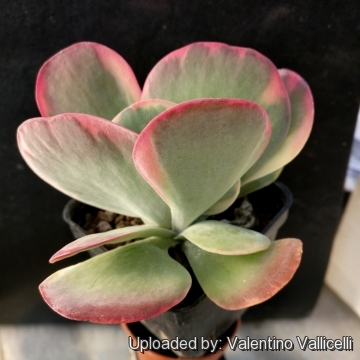 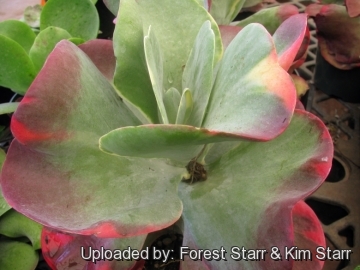 Cultivation and Propagation: Kalanchoe luciae is a very healthy plant, easy to culture and makes an interesting plant in any collection. It need a, keep it were is bright, sunny, warm and airy. The leaves become completely red with the cool nights of the winter, but will need protection from the cold during hard freezes.
Potting mix: They thrive in fast draining mix nutrient poor soils consisting of equal parts of loam and sand, with pumice or lava grit added to ensure good drainage.
Exposure: Mature plants do best in full sun to partial shade.
Watering: It needs moderate watering in autumn and spring while in summer it should be watered thoroughly and allowed to dry before watering again. During winter keep them rather dry, not completely (water only when the plant starts shrivelling), but it will generally grow even in winter if given water. These plants will survive on neglect. Over-watering is the most common cause of plant failure.
Frost resistance: prefers intermediate to warm temperatures but it is hardy to -2 ° C for short periods.
Pest and diseases: Whilst generally disease free it can be damaged by pest insects such as aphids, mealybugs and rarely scale. Protect from snails which permanently disfigure the leaves.
Propagation: It is propagated by removal of small offsets at the base of the main plant or by leaf cuttings in May or June, (when it is warm) . It grows easily roots at the end of a leaf which has fallen onto ground. New plants are ready within months.