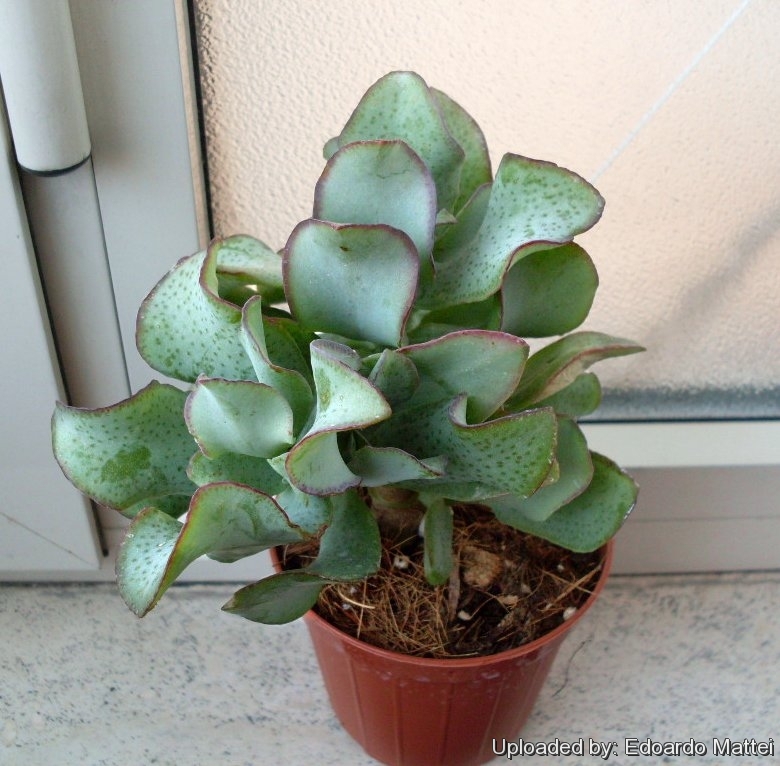 Origin and Habitat: Crassula arborescens subsp. undulatifolia is found in the southern parts of the Klein Winterhoek Mountains of the Eastern Cape. South Africa
Type locality: Sapkamma Station, E Cape, S. Africa.
Habitat and ecology: It grows in sandstone and shale-derived soils in rocky to gravel-like conditions. Plants often occupy large areas on hills, lower rocky slopes and sometimes cliffs in sheltered ravines but are also found in valleys but with a preference for sunny and exposed situations. Plants that occur on slopes or cliffs easily lose parts of their branches and these can root freely and develop into separate colonies. It has a shallow root system that permit the plant to fully utilize light rain showers. The grey to blue-green leaf colour reflects the sun and helps the plant to stay cool during very hot days. It is growing near plants of Crassula ovata but has a different flowering time.

Description: Crassula arborescens is commonly found in cultivation by the typical form of ssp arborescens, with thick rounded leaves that have earned it the common name of silver dollar jade. Subspecies undulatifolia has more elliptic/tongue-shaped, bluish-grey, thinner, less fleshy and twisted purple edged leaves, giving rise to the subspecies epithet. It also forms a large a branched pseudo-tree 0.6-2 m tall, similar to the jade plant, Crassula ovata. The subspecies undulatifolia has particularly glaucous leaves, very stout succulent branches and a natural bonsai-like aspect with compact rounded heads of whitish star flowers whose glossy petals are wider than most Crassula cultivars.
Leaves: In opposite pairs, erect not spreading, elliptic to elliptic-oblanceolate, 8-15(-20) mm broad, only slightly fleshy, bluish-grey, with dark green dots and purple undulated margins (not to resting in one plan as in subsp. arborescens).
Flowers: The flowers are very showy and carried in dense branches, are star-like, white to pink with almost spherical heads and carried slightly above the foliage. When flowering in spring to summer, the plant is almost completely covered with flowers. After pollination, the flowers turn to a papery brown which in itself is quite decorative.
Fruits 3-5 separate, oval, sharply tipped follicles (simple dry fruits splitting along one suture) c. 6 mm long remaining among the dried remains of persistent petals.
Seeds: Very small dispersed by wind.
Remarks: This plant was introduced in Europe and described by Dr. B.K Boom in the Dutch journal Succulenta in 1963 and again in Succulenta 59 (6), 1980, as Crassula portulacea 'Blauwe Vogel' (which translates to "blue bird") and was long thought to be a hybrid of Crassula ovata and Crassula arborescens, but it is the same as Crassula arborescens ssp. undulatifolia, a name validly published by Toelken in 1974. Crassula’Blue Bird’ is a synonym.

Subspecies, varieties, forms and cultivars of plants belonging to the Crassula arborescens group 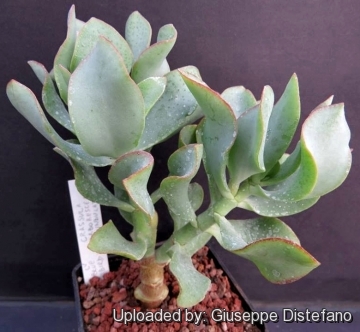 Cultivation and Propagation: Crassula arborescens subs. undulatifolia is a relatively commonly sold plant at garden outlet nurseries, and can make a nice low succulent shrublet in the garden. It does well in containers, and makes a good houseplant. It is widely grown and not difficult to cultivate and thrive with bright light and ample airflow. It can be shaped to create spectacular bonsai forms.
Growth rate: Moderately fast.
Soil: It grows best in sandy-gritty soil. Good drainage is very important as it is prone to root rot.
Fertilization: Feed it once or twice during the growing season with a fertilizer specifically formulated for cactus and succulents (poor in nitrogen), including all micro nutrients and trace elements diluted to ½ the strength recommended on the label.
Watering Needs: It is a very dry-tolerant plant. Water regularly in the growing season, but avoid water-logging and let dry between waterings. Water with caution in winter, as the plant can lose its roots if the soil stays cold and wet for extended periods. If grown in a container, bottom watering by immersing the container is recommended. It must have very dry atmosphere.
Sun Exposure: Does well in filtered sun, but can handle some shade, too. In shade the leaves colour will remain more green, while in harsh full sun conditions the foliage can develop a pinkish tinge. In summer keep cool and provide some shelter from direct sun during the hottest hours. It can be sunburned if moved from shade/greenhouse into full sun too quickly. It tends to get leggy in deep shade.
Frost Tolerance: Protect from frost to prevent scarring. It requires a minimum temperature of about 5°C, but will take a light frost and is hardy down to -5° (-7°) C for short periods if it is in dry soil (Lethal temperature in habitat -7 to -10 ° Celsius). USDA zones 9A – 11. In areas prone to frost, grow in an intermediate greenhouse or conservatory, in pots.
Uses: They make wonderful rocker plants in hot, dry areas and also grow well in containers or sunny patios or in a hot corner next to a swimming pool.
Pests and diseases: May be susceptible to mealybugs and rarely scale. Protect from cold.
Propagation: From seed but it is easily increased by cuttings. Cuttings root easily. It is also possible, to plant the leaves in good, sandy soil where they will take root - members of this family often propagate vegetatively in this way.