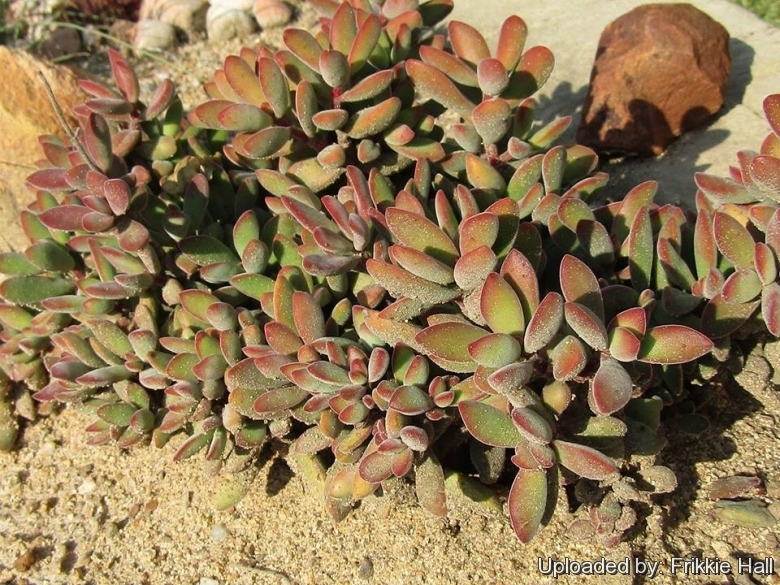 Origin and Habitat: Crassula rogersii is endemic to South Africa in the Eastern Cape (Province from Willowmore to Port Elizabeth and Port Alfred)
Habitat and ecology: Dry river valleys in Albany thicket and Succulent Karoo, among rocks and scrub.

Description: Crassula rogersii is a small, much-branched, decumbent to erect succulent bush with fleshy red stems and club-shaped leaves. The leaves are covered with short white hairs giving them a velvety appearance and a felt-like texture. In its natural habitat, Crassula rogersii forms a small, tight cushion to 15-30 cm tall. The plant remains green in shady spots but is at its best with plenty of sunlight, where the leaves become tipped with red. The tiny star-shaped flowers are yellow, and are held in small clusters at the end of thin stems from mid-summer to autumn. There are several hybrids of this plant.
Derivation of specific name: This member of the Crassulaceae family was given this name by Frederick A. Rogers (1876- 1944), English missionary and amateur botanist, lived in Republic of South Africa from 1904.
Roots: Fibrous.
Branches: Succulent, erect and later decumbent, green, older brancheas becoming woody and reddish-brown, 3.5-5 mm in diameter, old leaves not persistent.
Leaves: Opposite, oblanceolate to club-shaped or sub-semi-cylindrical, 15-23 mm long, 7-13 mm broad, ﬂattened, ascending and twisted sideways, hairy, both faces convex, green to yellowish green, margin reddish, horny, base cuneate, tip obtuse to rounded. Hairs fine, soft, and white.
Inflorescence: Elongated thyrses to 20 cm long, with several globular dichasia (clusters).
Flowers. Pale yellow. Sepals triangular, to 2.5 mm long, obtuse, margin ciliate. Corolla tubular, yellowish, the petals to 4 mm long, fused shortly at the base and with ovoid dorsal appendage. The anthers are dark brown.
Blooming season: Flowers mid-summer to autumn.
Similar species: Crassula rogersii is easily confounded with hairy forms of Crassula cultrata, but has smaller leaves which are convex below. The two species when occurring together are distinct and C. cultrata appears to be much more erect and (usually) glabrous. 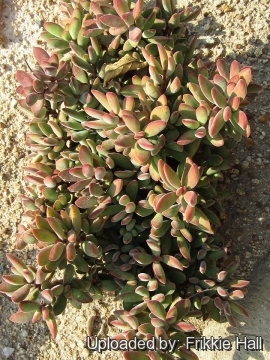 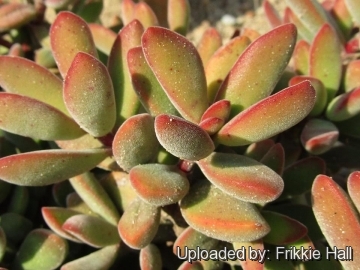 The leaves are covered with short white hairs giving them a velvety appearance and a felt-like texture. (Crassula rogersii) Photo by: Frikkie Hall

Cultivation and Propagation: Crassula rogersii develops into a small, dense cushion but does not seem to spread, making it particularly useful for pot cultivation or nooks in a rockery. Like most succulents, become very attractive and highly coloured when grown in shallow containers and exposed to all weather conditions, but for rapid growth good rich soil is necessary.
Exposition: It does best in bright light with some morning- and/or evening sun. A half shaded place will be tolerated. Afternoon sun and high heat in summer can cause the leaves become tipped with red.
Water: Drench the soil well, water running out of the pot’s hole must be removed after a few minutes. Wet legs can cause rotten roots. Before adding water next allow to dry.
Pests and bugs: Crassulas are sensitive to mealybugs. Large clumps of Crassula rogersii should be lifted and divided in the winter to prevent the clumps from rotting.
Propagation: Leaf cuttings, offsets.