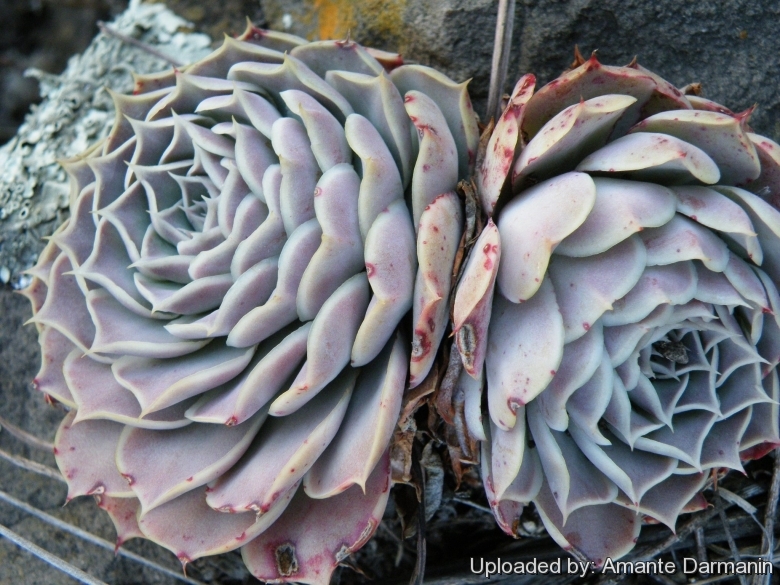 Description: The 'old hen-and-chickens' (Echeveria secunda) is a a neat, evergreen succulent plant that forms attractive clumps under 15 cm tall. It is probably one of the most common and hardiest of the many species and much used in the flower gardens. It is easily known by its small pale bluish-green rosette, the tips of the leaves being marked with red. In the summer it produces a one-sided arching cyme (inflorescence) to 30 cm in height, of nodding, urn-shaped red and yellow tipped flowers.
Stem: Very short creeping and forming numerous offsets.
Rosettes: Dense, basal, almost round and grows to a height of 7-15 cm.
Leaves: Numerous, oval shaped, spathulate to wedge-shaped, blunt, concave, keeled and spreading, sessile thick and fleshy crowded and loosely arranged round the stem as a common axis. With the exception of a few in the centre which are much smaller than the others the whole are similar in size and form varying from 2.5 to 7.5 cm in length and 1.2-3 cm in breadth at the widest part near the apex from which they gradually taper towards the base and end at the point in a small mucro (bristle). Their colour is a glaucescent green covered with a fine waxy bloom which easily rubs off on being touched. The outer edges and mucro on older leaves have hint of pink, red or brownish which is evident, primarily in winter.
Inflorescence: Flower stem round arching, pinky-blue relatively short, about 7.5-30 cm tall rising from one side of the mass of leaves and terminating in a unilateral deflexed simple raceme with hanging tip of about 5-15 pink, red and yellow tipped nodding flowers. Bracts small and fleshy ovate acuminate tinged with pink at the point. Pedicels of the earlier flowers about 2.5 cm long diminishing gradually both in size and length towards the extremity of the raceme.
Flowers: The flowers are fairly large compared to the plant and have red calyces and yellow petals, giving them a bi-coloured appearance. Calyx 5 leaved rotate spreading the segments thick and fleshy lanceolate, pointed. Corolla 7-12 mm, red outside, yellow within, tube narrowing at mouth which is acutely five lobed. Lobes swept back deep yellow. Filaments 10 five attached half way down the petals and the other five at the base opposite each division of the calyx but all of the same length Anthers erect deep yellow. Styles 5 short and compressed together pale shining green. Ovarium five celled with numerous seeds in each and having a small fleshy process at the base intermediate with the segments of the calyx.
Blooming season: It produces its flowers freely in the spring and summer.
Seeds: Very fine, somewhat elongated, brown.
Remarks: In the recent book by John Pilbeam "The Genus Echeveria" (British Cactus and Succulent Society, 2008) the author lists the correct name for this plant as Echeveria secunda forma secunda, noting that Myron Kimnack, citing recent DNA work, combined several similar species, including Echeveria pumila into Echeveria secunda.

Subspecies, varieties, forms and cultivars of plants belonging to the Echeveria secunda group 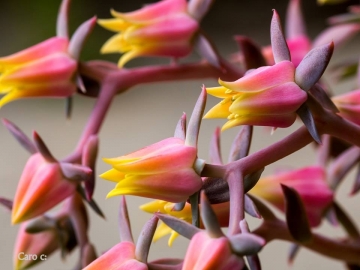 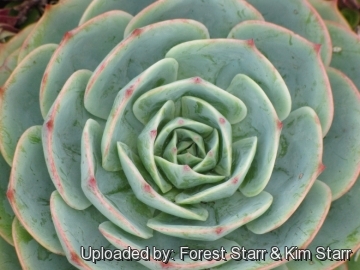 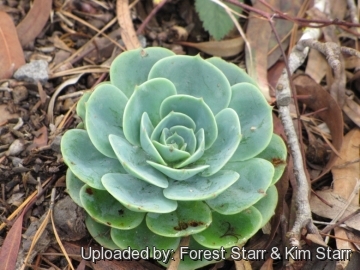 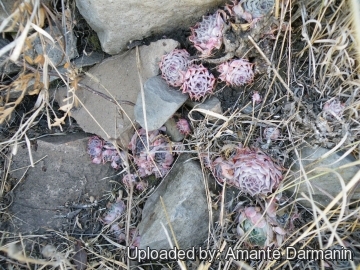 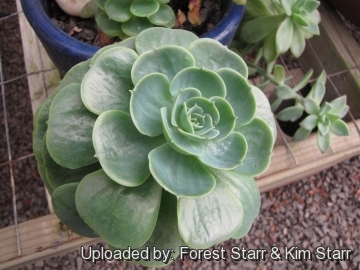 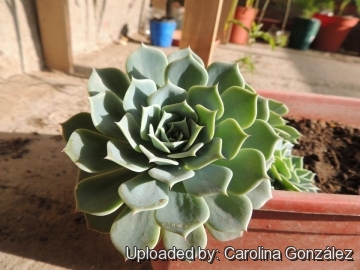 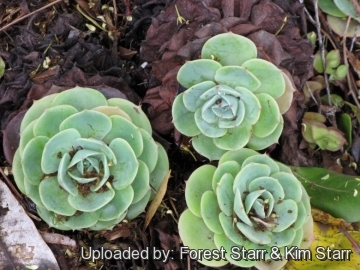 Cultivation and Propagation: Echeveria secunda is certainly one of the most versatile neat, low-growing rosette forming succulents. This tightly-clustered plant freely produces offsets and in the right situation, it can form a large planting, and makes a great accent plant for any collection or planting. Wonderful in rock garden walls or containers. It is easy to care for and is a good starting point for beginning gardeners. Echeveria secunda and Echeveria secunda var. glauca are suitable for planting at medium and high altitudes and nearly hardy as far north as Washington, D.C and England. This plant can be propagated annually until you have a well stocked outdoor succulent garden.
Growth rate: This echeveria variety is a slow grower, that grows in spring and autumn and will form beautiful clumps with time.
Soil: In habitat, many Echeverias grow on rocky outcroppings at higher altitudes. In this habitat, the water drains quickly away from the roots of the plant, never allowing the plant to remain waterlogged. For this reason, it is essential in cultivation to use a very porous soil, which will allow quick drainage.
Exposition: Bright light is required to prevent "stretching" of Echeverias ("stretching" occurs when a plant such as an Echeveria, is grown in dim light or over-fertilized, which causes overly lush growth that contributes to weak, pallid plants). Bright light enhances red edges.
Watering: Water thoroughly when soil is dry to the touch. Water sparingly in winter. A well-drained soil allows this plant to thrive getting winter rain.
Hardiness: Some hight elevation clones are proved to be frost hardy so far to as low as -12° C, almost to the bottom of USDA zone 8, but usually plants kept dry can can survive at – 4° or -8° C during short cold spell. On colder temperate regions it is grown under glass with heat.
Uses: It is cultivated as an ornamental plant for rock gardens planting, or as a potted plant. The low-growing clusters are very suitable to fill rock crevices. It is sometime used to cover the roof tiles of a house‐top. A layer of rosettes stapled to the roof overhang is used to hold an inch of peaty soil to the roof. It also used to form silvery blue small borders and are believed to keep away evil spirits. Mature clusters of rosette cascading from containers provide sculptural.
Pest: Mealybugs.
Propagation: Quite easy from offsets.