Crassula barklyi Photo by: Giuseppe Distefano
This interesting Crassula is very common and well known in cultivation, but is better known under the name of Crassula teres.

Origin and Habitat: Occurs on the western hills of Great and Little Namaqualand (northern Cape Province) from Vanrhynsdorp to Port Nolloth
Altitude: 50-500 metres above sea level.
Habitat: Crassula barklyi grows on gentle slopes usually covered with quartzite gravel, rarely hiding away in crack in thin, rocky soil at the base of reddish granite boulders and small cliffs or in rock outcrops.

Description: Crassula barklyi is a tiny annular columnar species better known by the common name Rattlesnake Buttons or Bandaged Finger the latter being aptly descriptive of the stem covered neatly and smoothly by the overlapping leaves which have membranous margins.
Note: This interesting Crassula is very common and well known in cultivation, but is better known under the name of Crassula teres. As reported in old texts the edges of the leaves of C. teres should have a transparent margin, while those of Crassula barklyi, are not without this. However the two plants are very similar (if not exactly the same) and it is hard to tell apart one from the other by body characteristic. In accordance with the variability of the species C. teres is invalid and nowadays considered as a synonym.
Habit: Crassula barklyi is a perennial-dwarf succulent shrub with erect or rarely decumbent stems, narrower than that of the closely related Crassula columnaris, longer and does not die when the inflorescence withers. Unlike its solitary relative, this species branches at the base into several attractive finger-like growths. It is very slow growing but will reach 50-90 mm.
Bodies (stem and leaves together): The stem is covered neatly and smoothly by the overlapping leaves to form a short almost cylindrical column, which has something of the appearance of a tree cone. Younger branches are almost spherical and looks like grey-green rosebuds.
Leaves: Fleshy, depressed-ovate, concave, 3-4 mm long, 10-15 mm wide, patelliform, overlapping and tightly clasping, light green, grey-green or grey-brown with deep green or bronze spots and have translucent membranous margins (about1-2 mm broad) with a fringe. Crassula barklyi like the allied Crassula columnaris possesses a dense fringe of erect, rarely slightly recurved cilia on its leaves which are capable of absorbing dew or rain water.
Inflorescence: The inflorescence is a terminal cymose capitulum partly hidden by leaves below.
Flowers: Perfumed at stems ends, tiny white stemless. Calyx lobes oblong-oblanceolate, 4-5 mm long, rounded and with fine spreading cilia, fleshy and green becoming yellow and membranous below. Corolla slender ampulliform, fused basally for 2-3 mm, cream. Lobes narrowly oblong-elliptic, 9-11 mm long, with a blunt beak. Stamens with yellow anthers. Squamae oblong-cuneate, 1-1,2 x 0,3-0,4 mm, truncate to slightly rounded, scarcely fleshy, yellow.
Blooming season: It flowers in winter (in habitat from June to August). 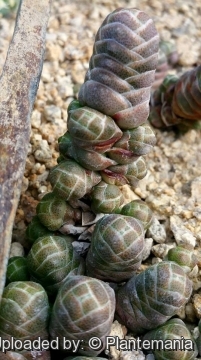 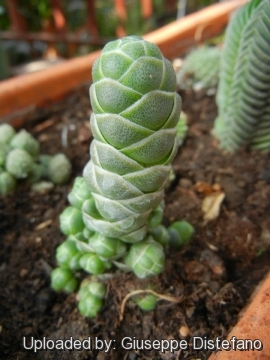 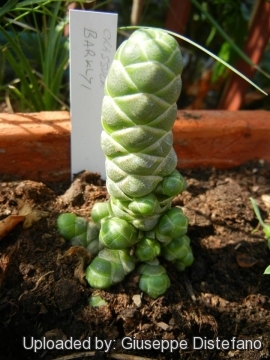 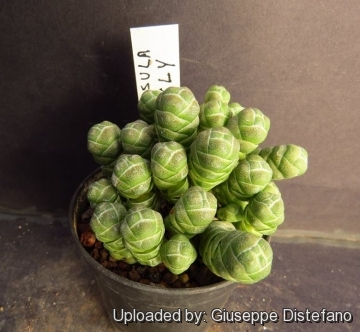 Cultivation and Propagation: Crassula barklyi are of easy cultivation and relatively low maintenance, which makes them a good houseplant, and can be an excellent subject for the beginning succulentophile (they can grow easily on window sills, verandas and in miniature succulent gardens where they are happy to share their habitat with other smaller succulent plants, or in outdoor rockeries). They are spring and autumn grower (summer dormant).
Soil: They prefer a very porous potting mix to increase drainage. A acid soil is ideal. You can grow a plant in a 6-10 cm pot for years and have perfectly happy plants. For best results, use a shallow pot.
Watering: Provide some water all year around, in the wild most of the growth occurs during spring and autumn. During the hot summer months, the soil should be kept moist but not overly wet. During the winter months, water only when the soil becomes completely dry. Wet soil quickly causes root and stem rot, especially during chilly winter months, but can re-root if taken care of. No water should ever be allowed to stand around the roots. Low ambient humidity is always needed.
Fertilization: The plants are fertilized only once during the growing season with a balanced fertilizer diluted to ? the recommended strength.
Sun Exposure: They need full sun or bright, filtered light with ample airflow to stay compact, but avoid direct blasting sun in mid summer (with sun exposure the leaf develops a nice brownish tint), they do not do well in full shade as they tend to etiolate, fall over and rot easily.
Pest & diseases: Crassulas are sensitive to mealybugs.
Rot: Rot is only a minor problem with Crassula if the plants are watered and ?aired? correctly. If they are not, fungicides won't help all that much. Care must be given in watering, keeping them warm and wet while growing, and cooler and dry when dormant.
Hardiness: Although the plants will survive mild frost if kept dry (hardy as low as -5? C) they should be protected from frost to prevent scarring. USDA 9b-12
Use: It is an excellent potted plant great for windowsill culture as well as in rock gardens. Indoors only in brightest position.
Pruning: Remove dead ?ower spikes only.
Propagation: They are easily propagated by the removal of off shoots, remove a lateral shoot and insert the basal part buried in the soil. This shoot should root within a month, and small offshootd will form at the base. They can also be grown from seed.