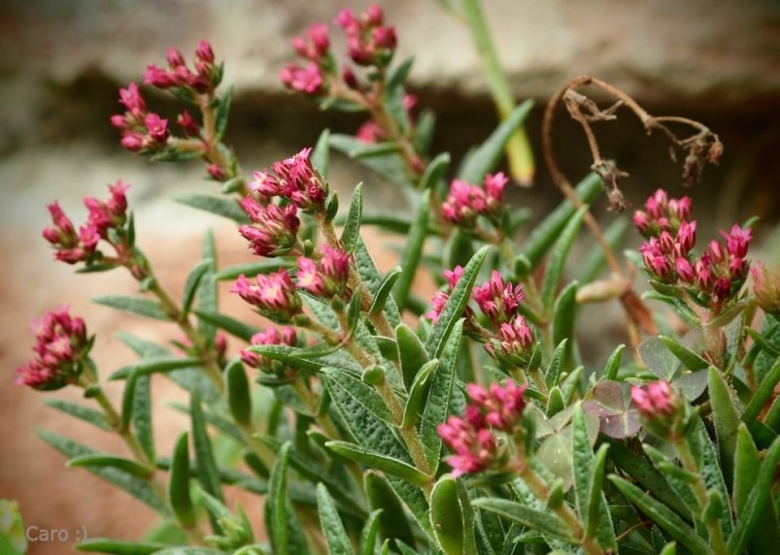 Origin and Habitat: Crassula exilis ssp. schmidtii comes from South Africa, it is very similar to Crassula exilis ssp. cooperi and perhaps representing a horticultural form of it. It does, however, not agree with any form recorded from nature and differs by more erect follicles.

Description: Crassula exilis ssp. schmidtii (Crassula schmidtii) is a carpeting, perennial succulent up to 20 cm or more across, made up of low branching stems with dense rosettes of leaves. The centres of the rosettes are going to elongate into erect inflorescences to 30 cm tall bearing small carmine-red flowers, and a white-flowering form was distributed as fa. Alba. It blooms very freely, and when it is grown in full sun, and not given too much water, its leaves develop an attractive reddish tinge.
Rosettes: Dense up to 7 cm across.
Leaves: Fleshy, linear-triangular, pointed, opposite and connected with each other at the base, each 2–4 cm long, dark green or grey-green, pitted and marked with dark dots above, lower surfaces rounded and red-flushed and with marginal hairs.
Flowers: Star-shaped, rose to bright pink-red to 4 mm across, in false umbels often as much as 5-6 cm width. Flowering stems hairy.
Blooming season: It flowers freely, the flowers appear in late autumn to winter and sometimes off and on all the year and last a long time.
Fruits: Erect follicles. 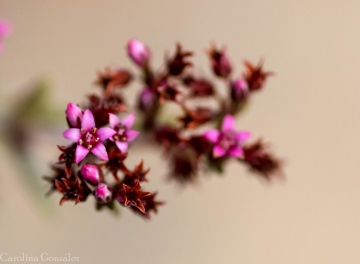 Cultivation and Propagation: Crassula exilis subs. Schmidtii is an attractive, dwarf succulent which flowers easily, it does well in containers, and makes a good houseplant it is also excellent for rockeries and living walls. It is not difficult to cultivate. It is widely cultivated for its small red flowers. Sometime used as a ground-cover in warm areas.
Growth rate: Moderately fast.
Soil: It grows best in sandy-gritty soil. Good drainage is very important as it is prone to root rot.
Repotting: Repot every two or four years in spring. Do not radically cut off roots: about 10 percent of the root ball is right.
Fertilization: Feed it from mid spring to early autumn every four or five weeks with a fertilizer specifically formulated for cactus and succulents (poor in nitrogen), including all micro nutrients and trace elements diluted to ½ the strength recommended on the label. Do not feed plants during winter.
Watering Needs: It is a very dry-tolerant plant. Water regularly in the growing season, but avoid water-logging and let dry between waterings. Water with caution in winter, as the plant can lose its roots if the soil stays cold and wet for extended periods. The lower the temperature the less water is needed. If grown in a container, bottom watering by immersing the container is recommended. Mist spraying is not needed, it must have very dry atmosphere.
Sun Exposure: Does well in filtered sun, but can handle some shade, too. In shade the leaves colour will remain more green, while in harsh full sun conditions the foliage can develop a pinkish tinge. In summer keep cool and provide some shelter from direct sun during the hottest hours. It can be sunburned if moved from shade/greenhouse into full sun too quickly. It tends to get leggy in deep shade.
Frost Tolerance: Protect from frost to prevent scarring. It requires a minimum temperature of about 5°C, but will take a light frost and is hardy down to -5° C for short periods if it is in dry soil (Lethal temperature in habitat -6 to -10 ° Celsius). USDA zones 9A – 11. In areas prone to frost, grow in an intermediate greenhouse or conservatory, in pots. The plant may be kept indoors throughout the year at a minimum winter temperature of 10°C not exceeding 18°C. In summer, the temperature will rise higher, but as this is accompanied by better light it does not matter. Position the plant near a sunny window.
Garden uses: They make wonderful rocker plants in hot, dry areas and also grow well in containers or luminous patios.
Traditional uses: None recorded.
Pests and diseases: May be susceptible to mealybugs and rarely scale. Protect from cold.
Propagation: Propagation is easy from either cuttings or leaves. The latter should be removed carefully as they are united at the base of the plant. After drying for a day or two they can be laid on top of a pot of compost where they will quickly root. The leaf cutting can then be repotted.