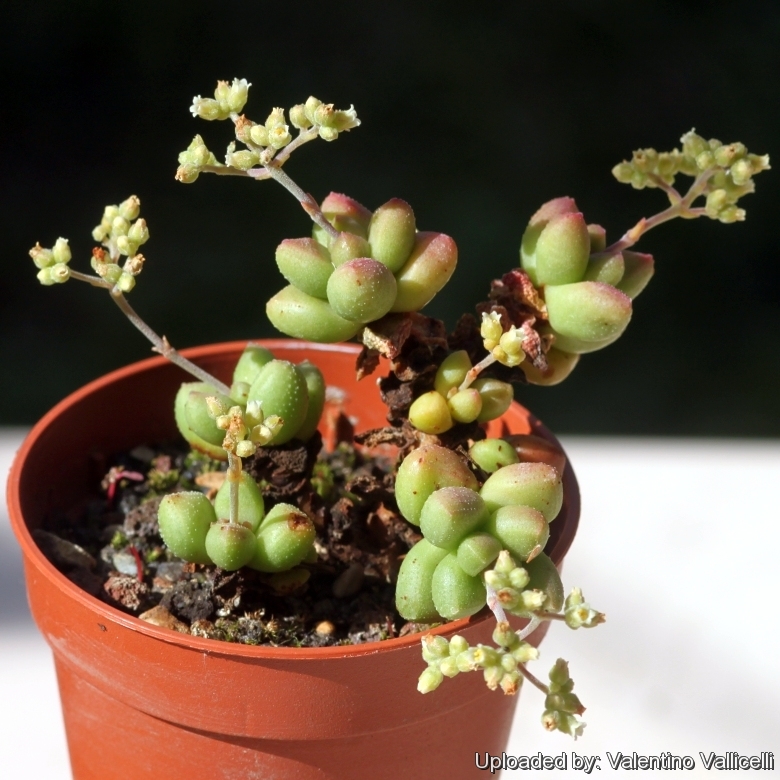 Origin and Habitat: Southern Namibia.
Altitude: 20–300 metres above sea level.
Habitat: This species grows scattered but widespread from between 6 and 12 sub-populations and locations, mainly in gentle to moderate south- and east-facing rocky slopes or on well-drained gravel plains both in rock crevices and sand among sandstone, granite or pegmatite gravel. It is usually found in exposed positions in full sun or in partial shade along with other dwarf succulent species like Adromiscbus nanus, Lithops and Tylecodon species. They have brownish leaves and closely mimics the rocks on which they grow and are lost to sight in this environment, this camouflage allows them to escape detection and is a very effective strategy for escaping predation.

Description: Crassula elegans subsp. namibensis is the Namibian form of the very variable Crassula elegans. It distinguishes for the leaves that are ovate with obtuse apices, glabrous and covered with papillae. It is quite variable and several different looking forms are available under this name.
Habit: It is a sprawling, perennial, leaf-succulent, up to 80 mm tall, with tough, slightly woody base.
Stems: Short, wiry, much branched.
Roots: Shallow and short. The root/shoot ratio is low during time of drought, but upon wetting of the soil the plant rapidly forms adventitious, deciduous rootlets which temporarily increase the root/shoot ratio.
Leaves: Ovate, 5–15 mm long and 4–8 mm broad, apices obtuse, broadly triangular in section, closely packed so that internodes are usually not visible, glabrous, covered with papillae, green to brownish red to deep red in full sun.
Inflorescence: It produces loose rounded thyrse at the stem apex with peduncle (15-)25-60 mm long, covered with recurved hairs.
Flowers: Inconspicuous, very small, tubular, white, cream, beige or yellowish often fading to brown, slightly perfumed. Petals basally fused. Stamens with brown anthers.
Blooming season: Autumn or winter

Subspecies, varieties, forms and cultivars of plants belonging to the Crassula elegans group 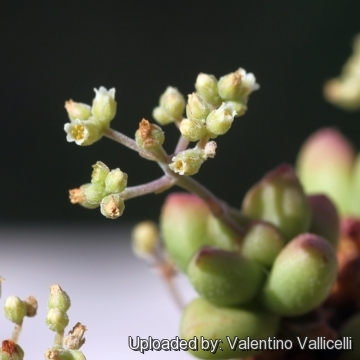 Cultivation and Propagation: Crassula elegans subs. namibensis are of easy cultivation and relatively low maintenance, which makes them a good houseplant, and can be an excellent subject for the beginning succulentophile (they can grow easily on window sills, verandas and in miniature succulent gardens where they are happy to share their habitat with other smaller succulent plants, or in outdoor rockeries). They are spring and autumn grower (summer dormant).
Soil: They are tolerant of a wide range of soils and habitats, but prefer a very porous potting mix to increase drainage. A non-acid soil is ideal. You can grow a plant in a 6-10 cm pot for years and have perfectly happy plants. For best results, use a shallow pot.
Watering: Provide some water all year around, in the wild most of the growth occurs during spring and autumn. During the hot summer months, the soil should be kept moist but not overly wet. During the winter months, water only when the soil becomes completely dry. Wet soil quickly causes root and stem rot, especially during chilly winter months, but can re-root if taken care of. No water should ever be allowed to stand around the roots. Low ambient humidity is always needed.
Fertilization: The plants are fertilized only once during the growing season with a balanced fertilizer diluted to ½ the recommended strength.
Sun Exposure: They need full sun or bright, filtered light with ample airflow to stay compact, but avoid direct blasting sun in mid summer (with sun exposure the leaf develops a nice reddish tint), they do not do well in full shade as they tend to etiolate, fall over and rot easily.
Pest & diseases: Crassulas are sensitive to mealybugs.
Rot: Rot is only a minor problem with Crassula if the plants are watered and “aired” correctly. If they are not, fungicides won't help all that much. Care must be given in watering, keeping them warm and wet while growing, and cooler and dry when dormant.
Hardiness: Although the plants will survive mild frost if kept dry (hardy as low as -5° C) they should be protected from frost to prevent scarring. USDA 9b-12
Use: It is an excellent potted plant great for windowsill culture as well as in rock gardens. Indoors only in brightest position.
Pruning: Remove old leaves from plant base and dead ﬂower spikes only.
Propagation: They are easily propagated by the removal of off shoots, remove a lateral shoot and insert the basal part buried in the soil. This shoot should root within a month, and small offshoots will form at the base. They can also be grown from seed.