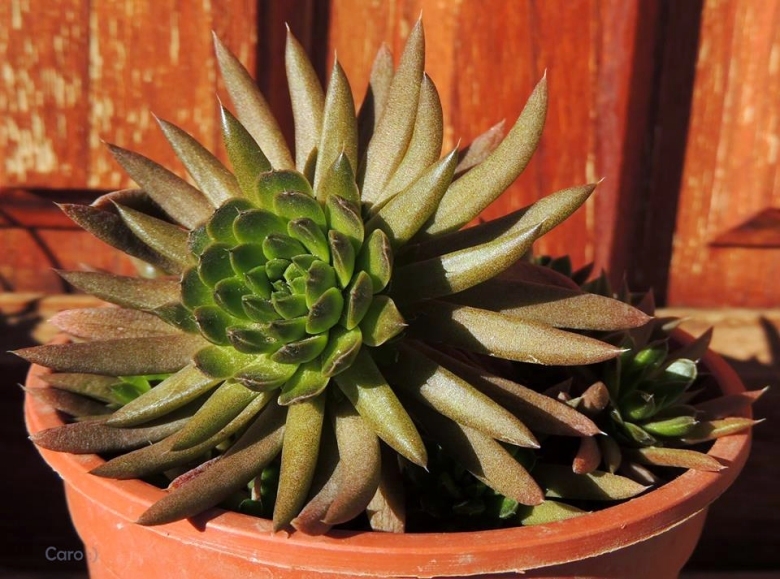 Description: Orostachys erubescens is a monocarpic perennial herb with leaves in tight ofsetting rosettes, whose every leaf is tipped with a spine. The leaves are touched with a russet that changes to bronzy-purple in the autumn. The rosette will elongate and put up strange, pagoda-like spikes of flowers in late summer. Once a rosette flowers, it dies, just like hens-and-chicks (Sempervivum tectorum), but again, plenty of younger rosettes are are left to keep the plant going.
Taxonomy: The nomenclature of this species is controversial, we have followed V. V. Byalt who believes that the species commonly identified as Orostachys erubescens is in fact Orostachys japonica, whereas true Orostachys erubescens is a synonym of Orostachys spinosa.
Rosette: Dimorphic, resembling a sunflower head 6-10 cm across, with a flattened compact dome of spiral, tightly closed leaves produced in winter (during the resting phase), surrounded by a ring of upright leaves. When the plant is mature, which takes about 2 to 5 years, it produces the conical flower stalk.
Leaves: Alternate, linear-elliptic, with a cartilaginous bristly (or spine) tip 1-3.5 mm long. 3-30 mm long, 4-6 mm, narrowly spathulate, fleshy, green touched with a russet that changes to a franker red in the autumn.
Flowers: In dense spike-like stalked, terminal racemes , with lanceolate leaves 4-10 cm long, 1.5-2 cm in diameter. Sepals 5, almost equal; petals 5, often joined at the base, spreading, 5-7 mm long, whitish pink; stamens 10, anthers red at first, darkening to purple; styles straight, slender, carpels 5, ovaries stalked.
Fruits: Erect, free. 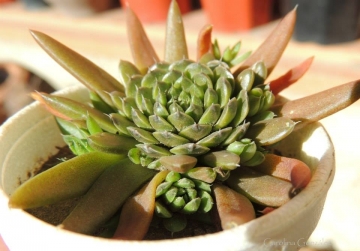 Orostachys erubescens Photo by: Carolina González
Send a photo of this plant.

Cultivation and Propagation: Orostachys erubescens is a glowing, succulent green suffused and edged with amber red. It is an interesting plant to grow in container or in the rock garden. It grows well in any position where the common Houseleek (Sempervivum tectorum) may be grown (but more difficult to find and keep), and in any soil. It can also be cultivated on the roofs of buildings.
Soil: It does not seem fussy about conditions in the garden. Require a very freely drained soil. Outdoors it will spread itself through narrow locations between rockery stones. It does not prefer rich loamy soil; gritty dirt with pea gravel suits it.
Watering: It takes little water & could rot if watered too often. During the growing season, the plants are watered and allowed to dry slightly before watering again. Although they can take a great deal of drought, they seem to do better with regular (but moderated) watering. During the winter months, plants are watered very little.
Exposition: It need full sun to light shade and tolerates shade, but a sunny spot is nicest, though in warmer climates it needs protection from too much sun because it is not very heat tolerant.
Frost Tolerance: Hardy at least to -12°C (or less).
Remarks: After the plant blooms and sets seed it will die, but there will be many offsets to take its place.
Uses: It is choicest species for the rock-garden and borders, it can be used for edgings, lines and panels in the flower garden, and naturalized on walls, ruins, or any position where the Common Houseleek thrives.
Propagation: It is usually propagated from seed or offsets.