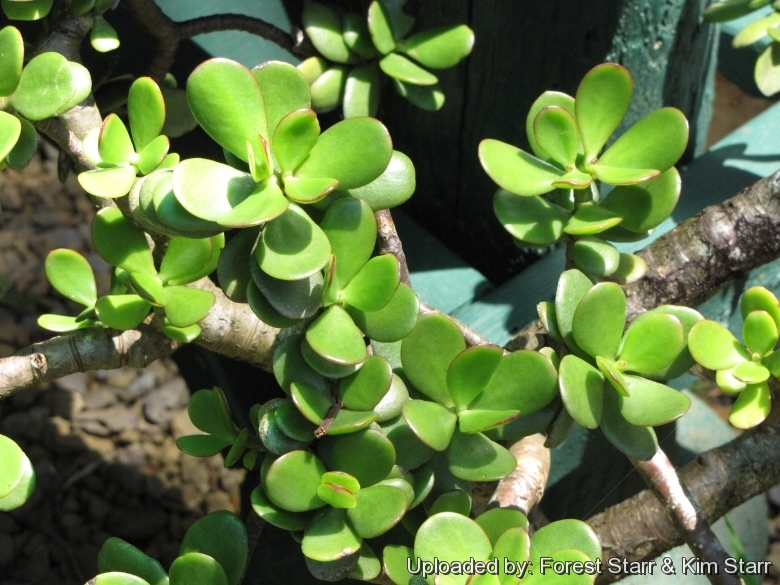 Origin and Habitat: Crassula ovata is found in scattered localities in northern and central Natal and near Queenstown in the eastern Cape and is fairly common in the Eastern Cape from Willow-more to East London and northwards to Queens-town, also in KwaZulu-Natal and Mozambique from Manhoca to Maputo, and is widely seen outdoors in other warm areas, such as California and Mediterranean.
Habitat: It grows among shrubs in open forests, on sandy-clayey grey soil on rocky slopes, hills and fields, often in sheltered ravines, together with a variety of aloes, euphorbias, Portulacaria afra and other succulents. The flowers attract bees, wasps, flies, beetles and butterflies. The fine dust-like seed is dispersed by the wind. Tortoises love the leaves but rarely devour them completely. Any discarded leaves left around the foot of the plant send down roots and grow into new plants. The stems also make handy bases for wasps to build their nests.

Description: Crassula ovata (the jade plant), first described as Cotyledon, is a succulent multibranched, very floriferous bonsai like shrub with glossy green leaves that are flattened yet succulent. They are pear shaped and shiny jade-green with or without a red margin. Slowly, after about two or three years, the plant develops a thick, gnarled light fawn trunk. As is often the case with plants that have been in cultivation for many years, this species has been given a number of names both Crassula argentea and Crassula portulacea are synonyms of this species."Jades" encompass several forms (often classified as distinct species of Crassula) and many various cultivars.
Habit: It is a large, much branched perennial shrub (0.6-)1-1.5(-3) m tall, completely glabrous and old leaves deciduous.
Stems: Up to 20 cm thick at the base, subterete, robust, succulent, greyish; branches jointed, denuded, marked with the scars of the fallen leaves.
Leaves: Opposite, distinct at base, 2-5 cm long and 1-3 cm broad, condensed at the extremities of the branchlets, longer than the internodes. In spite of its name, C. ovata usually has broadly elliptical to obovate-spathulate leaves, shortly acuminate and acute or subrounded at the top, with or without a red entire margin. Sessile or with petiole up to 4 mm long, wedge-shaped towards the base, subconnate when young, free with age, fleshy, flattened, slightly concave above and slightly convex beneath, with nectary dots in one row on both sides near the margin (but dots also scattered on both surfaces), green and shining when fresh, dark brown and covered with a peeling layer when dry.
Inflorescence: The inflorescence is round-topped, corymboso-paniculate, pedunculate, dense to loose with numerous flowers and trichotomous.
Flowers: Corolla star-shaped, 5-merous, white tinged pink. Peduncles 1-4 cm. long. Pedicels 4.5-8 mm long. Calyx c. 5 mm in diameter campanulate to nearly saucer-shaped.Sepals 1.15 mm long and 1.5 mm broad at the base, broadly triangular, acute, fleshy, their external surface similar to that of the leaves. Corolla white or faintly rose Petals (5)6.25-7.5(10) mm long, oblong or lanceolate, keeled, acute, mucronate at the apex, slightly connate at the base, spreading. Stamen-filaments 4-5.5 mm long with purple anthers. Anthers fertile c. 0.5 mm broad, transverse-oblong, or sterile c. 0.75 mm. long and oblong or lanceolate. Scales broader than long. Styles 2-3 mm. long, filiform.
Blooming season: It flowers in winter (in habitat form June to August. Its companion species in the Western Cape is Crassula arborescens which flowers from October to January)
Fruits (follicles): 3-3.25 mm long, obliquely oblong-ovoid. 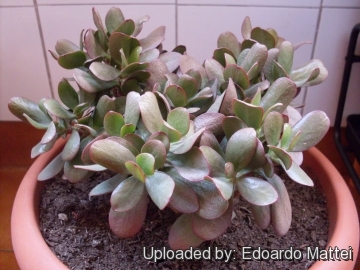 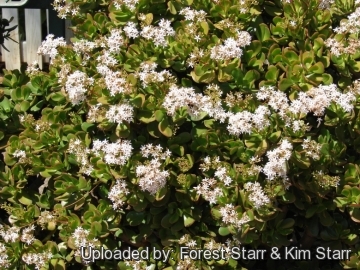 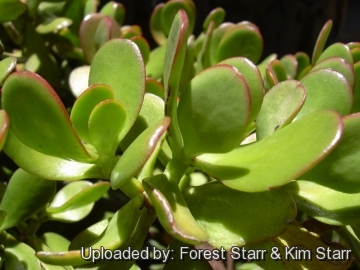 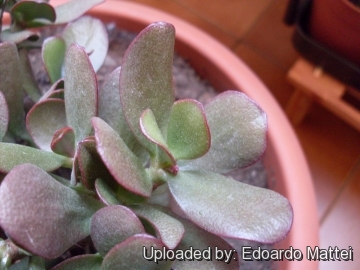 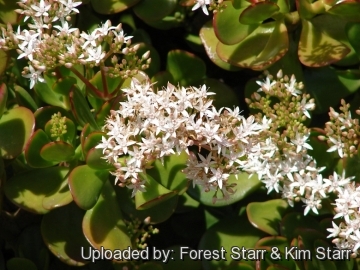 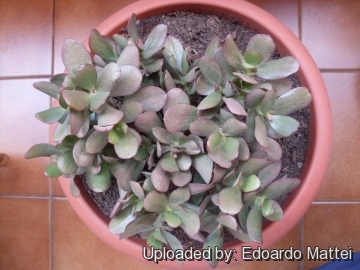 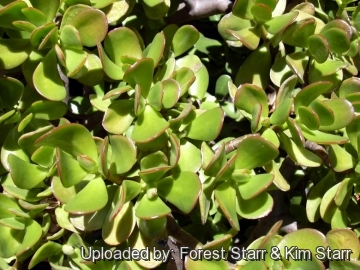 Cultivation and Propagation: Crassula ovata is a relatively commonly sold plant at garden outlet nurseries, and can make a nice low succulent shrublet in the garden, does well in containers, and makes a good houseplant or indoor bonsai. It is widely grown and not difficult to cultivate. It thrive with bright light and ample airflow.
Growth rate: Moderately fast.
Soil: It grows best in sandy-gritty soil. Good drainage is very important as it is prone to root rot.
Repotting: Repot every three or four years in spring. Do not radically cut off roots: about 10 percent of the root ball is right.
Fertilization: Feed it from mid spring to early autumn every four or five weeks with a fertilizer specifically formulated for cactus and succulents (poor in nitrogen), including all micro nutrients and trace elements diluted to half the strength recommended on the label. Do not feed plants during winter.
Watering Needs: It is a very dry-tolerant plant. Water regularly in the growing season, but avoid water-logging and let dry between waterings. Water with caution in winter, as the plant can lose its roots if the soil stays cold and wet for extended periods. The lower the temperature the less water is needed. If grown in a container, bottom watering by immersing the container is recommended. Mist spraying is not needed, it must have very dry atmosphere.
Sun Exposure: Does well in filtered sun, but can handle some shade, too. In shade the leaves colour will remain more green, while in harsh full sun conditions the foliage can develop a pinkish tinge. In summer keep cool and provide some shelter from direct sun during the hottest hours. It can be sunburned if moved from shade/greenhouse into full sun too quickly. It tends to get leggy in deep shade.
Frost Tolerance: Protect from frost to prevent scarring. It requires a minimum temperature of about 5 degrees Celsius for short periods if it is in dry soil (Lethal temperature in habitat -6 to -10 degrees Celsius). USDA zones 9A ? 11. In areas prone to frost, grow in an intermediate greenhouse or conservatory, in pots. The plant may be kept indoors throughout the year at a minimum winter temperature of 10 degrees Celsius not exceeding 18 degrees Celsius. In summer, the temperature will rise higher, but as this is accompanied by better light it does not matter. Position the plant near a sunny window.
Garden uses: They make wonderful rocker plants in hot, dry areas and also grow well in containers or sunny patios or in a hot corner next to a swimming pool.
Traditional uses: The roots werw eaten by the Hottentots under the name "T'Karckay", they were grated and cooked after which they were eaten with thick milk. The leaves were also used medicinally, boiled in milk as a remedy for diarrhoea, and used to treat epilepsy, corns and as a purgative. In the Far East, Germany and the USA it is traditionally grown in square porcelain tubs with 'lion feet' to bring good financial luck, and has attracted more common names including the Money Tree, Penny Plant, Dollar Plant and Tree of Happiness.
Bonsai culture: Prune at any time of the year and cut off crossing branches. Wiring is seldom needed.
Pests and diseases: May be susceptible to mealybugs and rarely scale. Protect from cold.
Propagation: From seed but it is easily increased by cuttings. Cuttings root easily. It is also possible, to plant the leaves in good, sandy soil where they will take root - members of this family often propagate vegetatively in this way. Take leaf cuttings in spring and summer. Detach a leaf from an established plant by pulling or bending, and leave it to dry for a day. Insert the broken end of the leaf into a mix of one part slightly moist peat and two parts sharp sand Firm the mix around the bases of each cut-ting, which will later grow roots. The leaf cutting can then be repotted