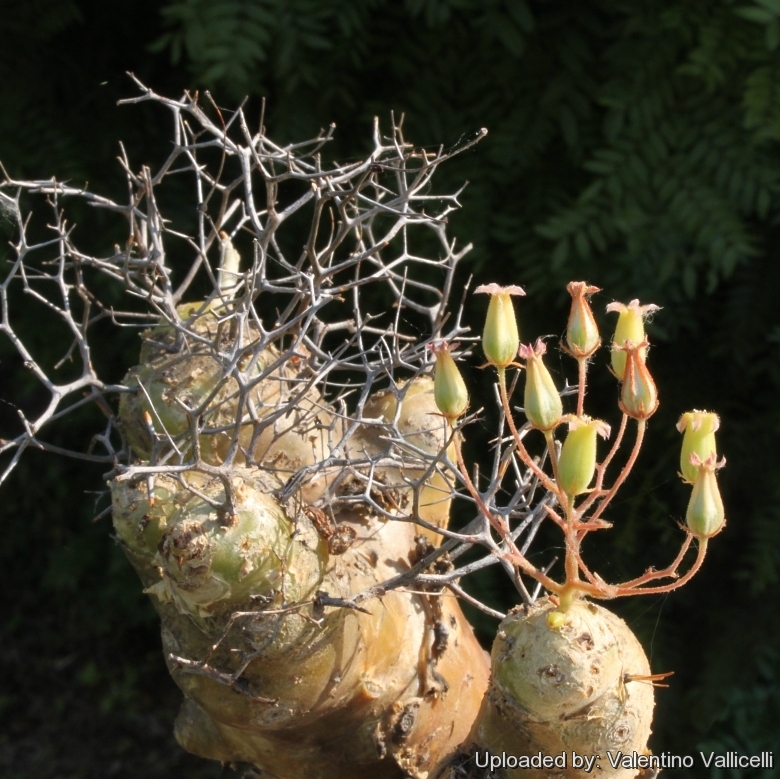 Origin and Habitat: South africa (Southern Cape region, Namaqualand, Little Karoo) and Namibia
Habitat: Tylecodon reticulatus grows on dry rocky coasts and mountains on sandy loam with quartz where it often dominates the mountain landscape; the plant is not considered threatened early in the 21st Century.

Description: Tylecodon reticulatus, commonly called sifkop (sieve head), is a sturdy succulent species with brown stems, dense gnarled branches, and possess a characteristic crisscross framework of 'spines' derived from the old heads and stalks of the flower that grow annually from branch tips. which. These persistent old flower stalks harden after the flowers have fallen, and from a dense, thorny, reticulated protective layer suggesting the epithet. This prickly lattice further armour against potential browsers.
Habit: It is a compact highly stem-succulent shrublet with many stout branches forming a gnarled, roughly hemispherical dome 30(-60) cm across with succulent leaves crowded at the branch tips..
Stem: Branches short, thick, fleshy or somewhat woody at the base. Bark greyish, papery, peeling.
Leaves: 2-4,5 cm long, 5-7 mm across, cylindrical, to spindle-shaped, tapperig toward the apex, often flattened or furrowed above, fleshy, soft and flexible, grey-green, downy or smooth.
Inflorescence: Scape slender, wiry, with a much-branched dichasium, the whole persiging to form a dense tangle of weak silvery thorns enveloping the plant.
Flowers: Erect 7-15 mm yellowish green. Corolla-tube cylindric or urn-shaped. The calyces of the flowers may also remain on the dry stalks for a period, but become loose when dry, running up and down the stalks like beads or insects when the wind blows.
Blooming season: Winter.
Seeds: Extremely small, weighting less than 0,03 mg. These small seeds (also known as dust diaspores) can be blown about like dust particles without any special devices for buoyancy. In this species, enormous numbers of seeds are produced at the cost of fewer, larger sized seeds. Because this plant occur abundantly in the arid areas and has specific habitat requirements, the production of increased numbers of seeds is essential to enhance the probability that at least some seeds will reach a favourable germination site. Except for their small size, these diaspores generally lack other appendages to further promote dispersal by wind. Several genera of the Crassulaceae, e.g. Crassula, Tylecodon and Cotyledon, occurring in the arid areas of southern Africa have very tiny dust-like seeds. The production of numerous dust-like seeds by desert species serves as an escape strategy to prevent mass consumption of seeds. These tiny seeds are carried by the wind to cracks and furrows in the soil and are then covered with fine soil particles.

Subspecies, varieties, forms and cultivars of plants belonging to the Tylecodon reticulatus group 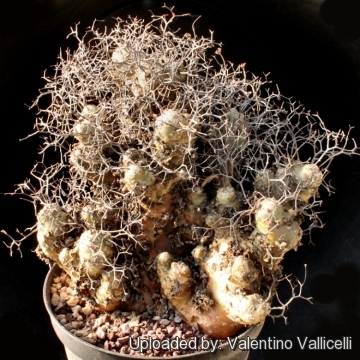 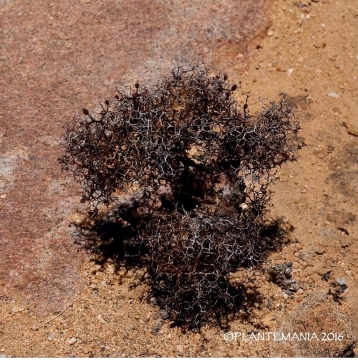 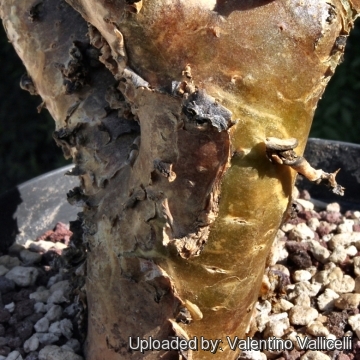 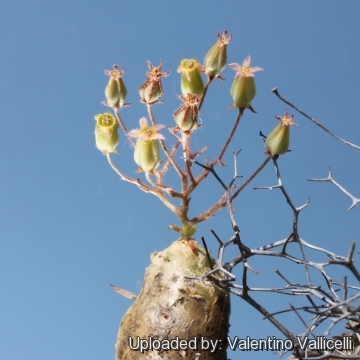 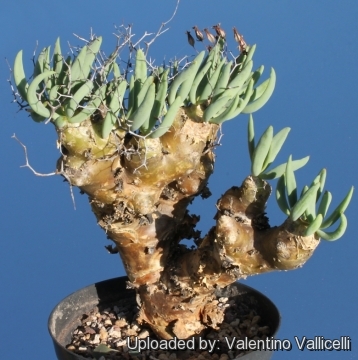 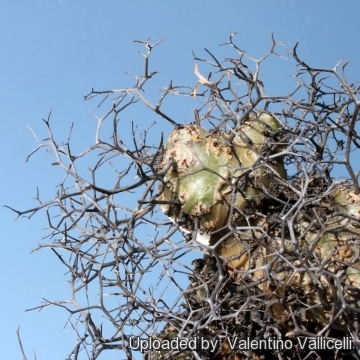 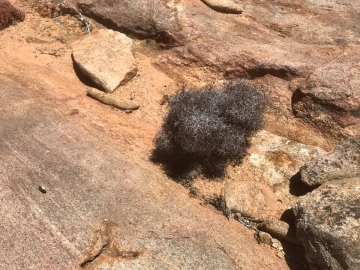 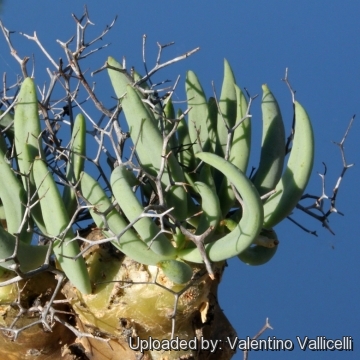 Cultivation and Propagation: Although usually grown only by specialist caudiform grower it presents no great difficulty in cultivation. It is a winter grower, dormant in the summer.
Growing rate: This is a very slow growing species.
Soil: Tylecodon reticulatus, like all other caudiciforms, requires very well-drained soils. Out-of-Doors prefers sandy soil, sandy loam soil provided the drainage is good. In pot it needs an open medium comprising equal parts of well decomposed compost or finely milled bark, and river or silica sand (or pumice) or a well drained, cactus compost.
Repotting: Re pot every 2/3 years using the above compost with added slow release fertilizer, but fully grown plants can remain in the same position for many years. Plant it with the neck at soil level and grow it in pots with a diameter of at least 25 cm. Give it excellent drainage.
Fertilization: Because they are adapted to poor soil, feeding is not really necessary, but some ash will not do them any harm. On pots fertilize moderately during the growing season with diluted high potassium fertilizer.
Exposure: It is most suitably grown in full exposed areas but it will even grow and bloom in half-sun.
Watering: As it is a deciduous winter-growing plant, it likes moisture from late summer to early spring, and withhold water from late spring to summer (dormancy period). In the growing season water when the roots are almost dry, and reduce watering in winter to once every two weeks.
Hardiness: Winter minimum temperature is 5ºC but better at 8ºC. The leaves easily drop off in cool conditions.
Garden uses: The plants are mostly grown by specialist caudiciform collectors, usually as container subjects.
Warning: The plant is poisonous to stock, causing stomach cramps.
Pest and diseases: It is susceptible to attack by mealy bugs.
Propagation: From seed. Seeds form readily and should be harvested and sown as soon as they can be easily removed from the capsules. The seeds germinate without difficulty. Seeds may take up to two months before the first leaf appears above ground, and a further 10 to 20 years to reach maturity. If it is the intention to plant these seedlings out into a bag or pot, they can be transplanted in their second or third year. Once planted in a permanent position do not dug-up and moved them constantly from one location to the next. A word of caution - do not plant the swollen stems too deep. Ensure the slender neck of the plant is just protruding above the soil with only the root underground. It can also be propagated from cuttings in late Autumn.

by Valentino Vallicelli
There are a total of 15 Photos.
Click here to view them all!
Cite this page: "Cotyledon reticulata" Text available under a CC-BY-SA Creative Commons Attribution License. www.llifle.com 14 Nov. 2005. 05 Dec 2020. </Encyclopedia/SUCCULENTS/Family/Crassulaceae/17355/Cotyledon_reticulata>