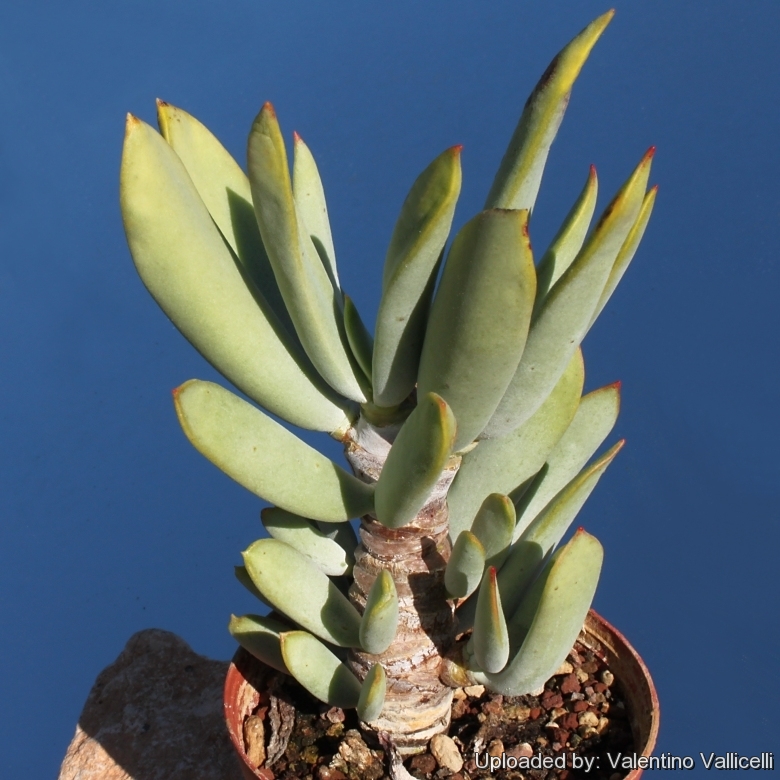 Origin and Habitat: South Africa and Swaziland ( Central Coast, South Coast)
Altitude range: less than 100 metres above sea level.
Habitat: In the wild, Cotyledon oblonga is a succulent undershrub found in coastal bluffs and dunes, or in rock crevices in exposed situations of slopes often in low treeless vegetation among grasses. It is also widely cultivated and popular in gardens in many subtropical countries, it has becoming naturalized and is often invasive in vast places in California, Australia and New Zealand.

Description: Cotyledon oblonga (now considered a subspecies of Cotyledon orbiculata) is distinguished by long silvery-white to pale grey-green chalky-looking finger-like leaves, that take a striking purplish colour in times of drought and stress.
Habit: It is a robust evergreen succulent shrublet that branches from ground level, forming large clumps.
Stem: Robust, branching, bushy, erect or reclining, fleshy, glabrous towards the base, pubescent above, elongated, up to 1 m long and 1-2 cm in diameter, stiff, with the tips growing upward simple or once or twice divided older part leafless. Bark pale, wrinkled, with noticeable scars of fallen leaves.
Leaves: Opposite, or subopposite–decussate, sessile, generally 2–4 pairs crowded or not in the upper 2–9,5 cm long part of the stem, mostly erect or sometimes partially reflexed, 5-10(-18) cm long, (1-)2-3(-4) cm broad, fleshy, obovate, wedge-shaped to oblong–linear, somewhat flattened, cuneate at base, usually tipped with an abrupt point, hairless or seldom velvety, pale green, grey-green, grey-white, blue-grey with a powdery waxy coating over the whole leaf that helps reflect sunlight and conserve water. Margins entire sometimes with deep-reddish, contracted or narrowing into a short subpetiole.
Inflorescence: Terminal, cymose, loosely panicled, 10-30 flowered usually less than 15 cm. in diameter, glabrous, whitish–bloomed, clusters at the end of an erect nearly leafless peduncle 20-40(-50) cm long. Pedicels pendent in flower, erect in fruit.
Flower: Bell-shaped to tubular approx 3,5 cm long, pendent, glabrous. Pedicels pendent in flower, erect in fruit, 1–3 cm long. Tube cylindrical or subcylindrical, 1,5–2 cm long and (6–)10-20(–25) mm in diameter, with hairy ring in proximal 1/4. Calyx 4–5 mm long. Calyx, corolla circumscissile at base in fruit. Sepals triangular 2-5 mm long. Corolla salmon, pinkish or orange–yellow, lobes 10–15 mm, recurved. Stamens 10, exserted epipetalous on tube; filaments 18–25 mm long. Anthers ovate, yellow 2,5–3,5 mm. Styles about 15 mm long, exserted with stigmas not attaining the anthers. The smell is very strong and something resembling that of decaying roast beef or of some of the fungi. Pollinated mainly by honeybees.
Blooming season: Flowers all year round, though primarily in later winter and early spring.
Seeds: Extremely small, weighting bout 0,01 mg. These small seeds (also known as dust diaspores) can be blown about like dust particles without any special devices for buoyancy. In this species, enormous numbers of seeds are produced at the cost of fewer, larger sized seeds . Because this plant occur abundantly in the arid areas and has specific habitat requirements, the production of increased numbers of seeds is essential to enhance the probability that at least some seeds will reach a favourable germination site. Except for their small size, these diaspores generally lack other appendages to further promote dispersal by wind. Several genera of the Crassulaceae, e.g. Crassula, Tylecodon and Cotyledon, occouring in the arid areas of southern Africa have very tiny dust-like seeds. The production of numerous dust-like seeds by desert species serves as an escape strategy to prevent mass consumption of seeds. These tiny seeds are carried by the wind to cracks and furrows in the soil and are then covered with fine soil particles. 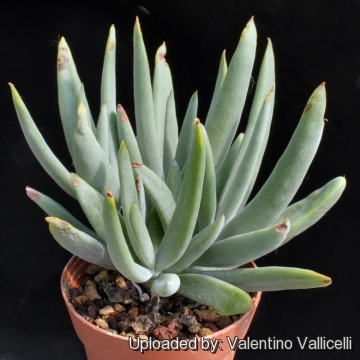 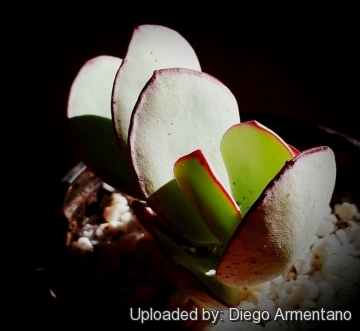 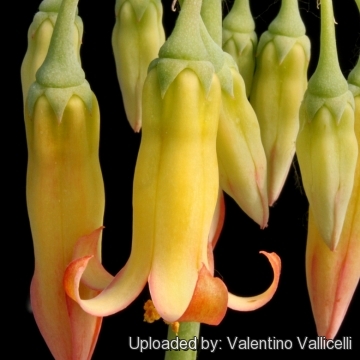 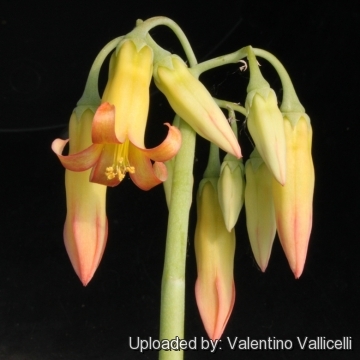 Cultivation and Propagation: Cotyledon orbiculata var. oblonga is widely grown and not difficult to cultivate. Cotyledons are very responsive to differing cultural conditions both as regards colour, length and shape of leaves, rate of growth and size of plant.
Growth rate: Moderately fast.
Soil: It grows best in sandy-gritty soil. Good drainage is very important as it is prone to root rot.
Fertilization: Feed it once or twice during the growing season with a fertilizer specifically formulated for cactus and succulents (poor in nitrogen), including all micro nutrients and trace elements diluted to ½ the strength recommended on the label.
Watering Needs: It is a very dry-tolerant plant. Water regularly in the growing season, but avoid water-logging and let dry between watering, they should dry out completely during the rest period. The leaves have a white waxy coating over the whole leaf. To preserve this covering, plants should be watered from below. If grown in a container, bottom watering by immersing the container is recommended. It must have very dry atmosphere.
Sun Exposure: It grows in sun or part shade but flowers best in full sun. In summer keep cool and provide some shelter from direct sun during the hottest hours. In shade the body colour will remain more green, while in harsh full sun conditions the foliage can develop its characteristic blue-grey tinge. It can be sunburned if moved from shade/greenhouse into full sun too quickly. The amount of sunlight it can withstand without scorching depends upon the how hot it becomes in the summer in the locale in which it is planted.
Frost Tolerance: Light frost protection required. It requires a minimum temperature of about 5°C, but will take a light frost and is hardy down to -5° C for short periods if it is in dry soil (Lethal temperature in habitat -6 to -10 ° Celsius). USDA zones 9A – 11. In areas prone to frost, grow in an intermediate greenhouse or conservatory, in pots.
Uses: They make wonderful rocker plants in hot, dry areas and also grow well in containers or sunny patios or in a hot corner next to a swimming pool.
Warning: The plants are highly poisonous to humans and domestic animals, especially sheep and goats, and the meat of animals killed by cotyledonosis remains toxic even after cooking. Poisoning may be acute or chronic, the latter due to the cumulative effect of the toxin.
Pests and diseases: May be susceptible to mealybugs and rarely scale. Protect from cold.
Propagation: From seed but it is easily increased by cuttings. Cuttings root easily. It is also possible, to plant the leaves in good, sandy soil where they will take root - members of this family often propagate vegetatively in this way.