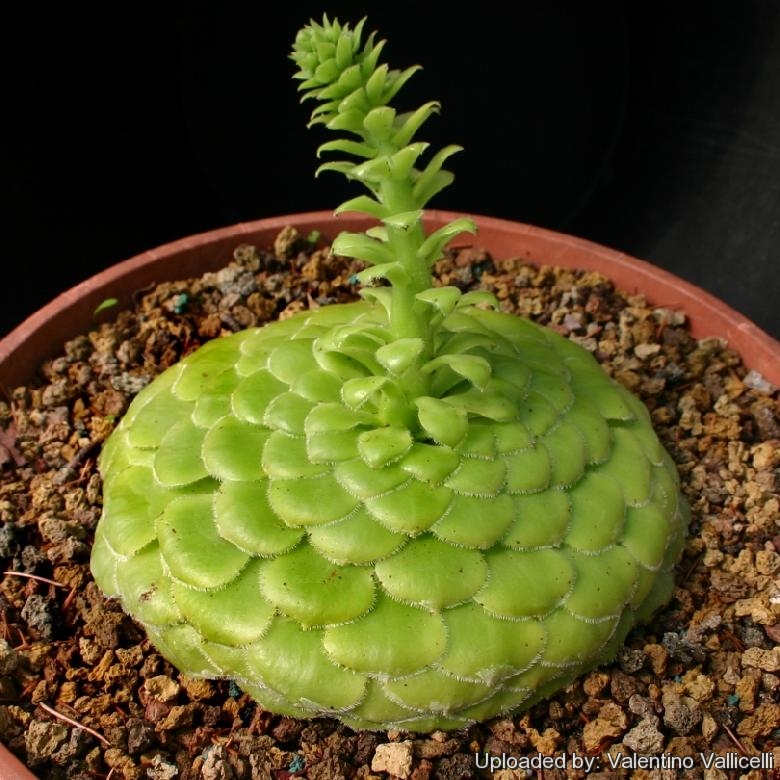 Aeonium tabulaeforme (tabuliforme)
A most unusual plant from the Canary Islands. Individual plants form a perfect flat disc which can grow to 45 in diameter. This plant is also commonly called saucer plant. Sometimes, the form will be crested in the center, making it look like a big green turtle!

Origin and Habitat: Canary Islands (from the coastal cliffs on Tenerife) on several places, Mainly in Teno area, but also at Taganana, San Juan, Bajamar,
Habitat: These totally flat succulents grows in vertical cracks in the lava flows on rather steep slopes at around 500 m of altitude usualy facing the N or N.W. This collocation enabling the crowns to shed water, effectively preventing rot.

Description: Aeonium tabulaeforme is a strange and wonderful stemless , ground hugging, rosette. Usually single or offsetting which used to be flat as a pancake. As with most of the stemless species, this one is monocarpic.
Leaves: Rounded, soft-green more or less spathulate with long cilia on the margin. Leaves 3-10(-15) cm long, 2,5-4 cm wide.
Rosette: Usually unbranched formed by 100 to 200 (or more) closely overlapping leaves held in a swirling pattern. The rosette is round, flat, only 2-5cm tall but up to 45 cm in diameter.
Flowers: The flower stems is erect, arise from the middle of the rosette and reaches 50-60 cm of height. It produces many small yellow flowers. The Aeonium lives about 3 years then dies after blooming.
Blooming season: Late Spring
Remarks: Sometimes it produces nice crested stems and seems to to change in and out of its crested mode during the years.

Subspecies, varieties, forms and cultivars of plants belonging to the Aeonium tabuliforme group 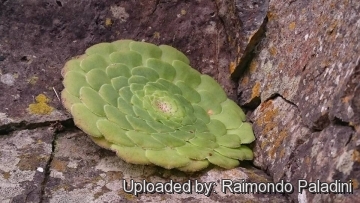 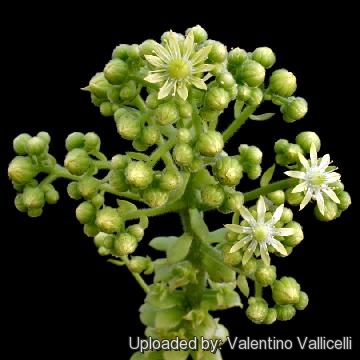 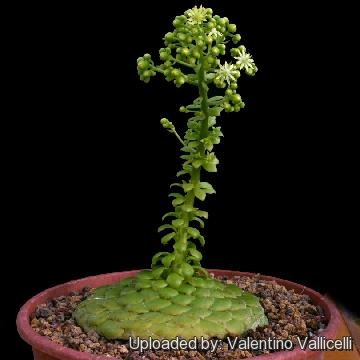 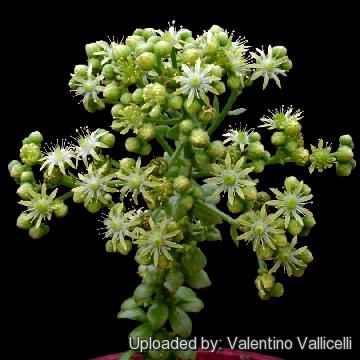 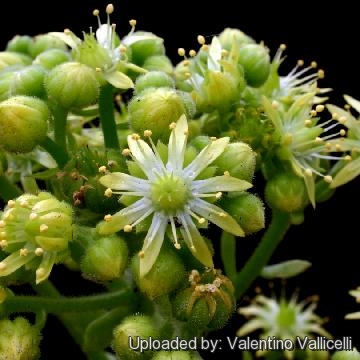 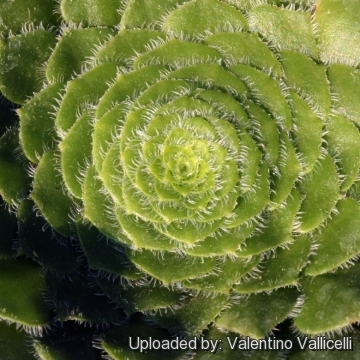 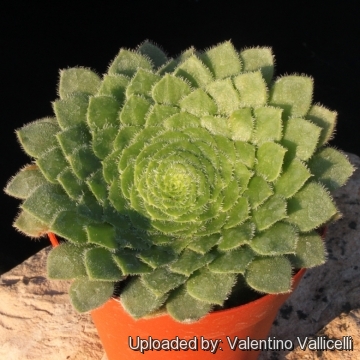 Aeonium tabuliforme Photo by: Valentino Vallicelli
Send a photo of this plant.

Cultivation and Propagation: In temperate regions, Aeoniums will grow almost all year, only resting a bit during the hottest part of summer. This easy species is suited for pot culture and prefers light shade or shade. It needs moderate water in summer, keep dry in winter Fairly prone to stem root rot do not let water sit on the rosette crown. Happy in just about any soil type as long as adequate drainage is provided however pot-grown specimens appreciate rich soil. Hardy only to -2 degrees C need protection in Winter. Someone suggest to keep it like in nature (vertical) on the rockwalls. It can be used as a focal point in a succulent garden or planted in a rock wall. Thrives indoors as a houseplant too!
Watch the snails they love this plant
.
Reproduction: Seeds, it can also It be propagated by offshoots or leaf cuttings. Usually the parent plant produces a few pups on the flowering stalk that is in bloom. If we don't get either seed or pups, we can try to root individual leaves that are connected to the main stalk below the 'flower'. In fact we could start to do that before the main plant starts to decline. This works very well for those Crassula that stop growing after they have bloomed.