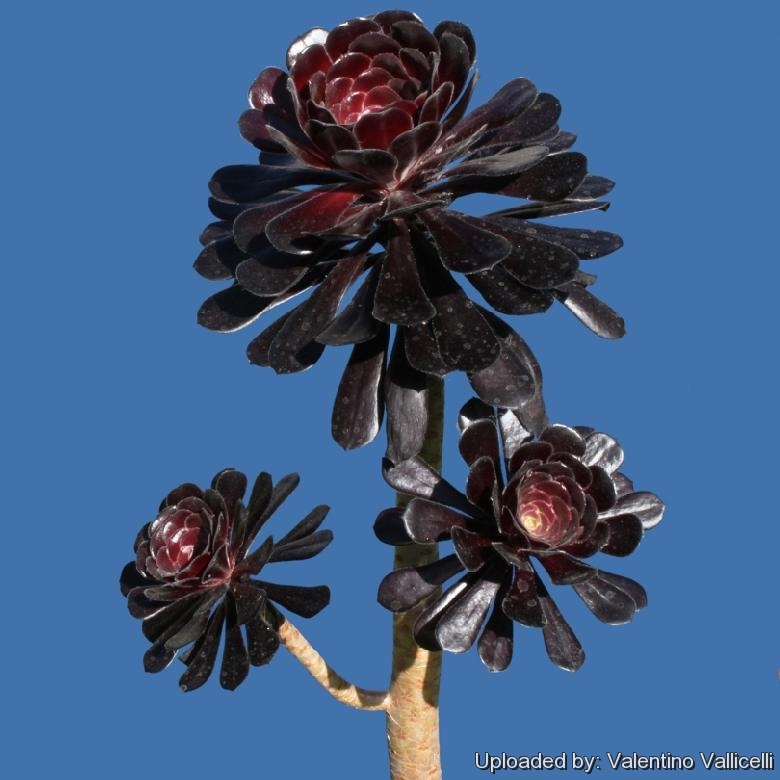 Aeonium arboreum var. atropurpureum ''SCHWARZKOPF''
This unique species has a flair for the dramatic. Its large heads of deep purple black foliage truly stand out against other greenery. The bright yellow flowers set against the almost black foliage are very showy.

Origin and Habitat: Garden origin (Nursery produced cultivar) For a long time this choicest cultivar has been considered a sport of the Aeonium arboretum which originated in Holland (or Germany?). It now seems that it comes from the Canary Islands, thus it then cannot be a cultivar of Aeonium arboreum, since Aeonium arboreum doesn't come from there. The latest theory is that it is a cultivar from Aeonium manriqueorum.

Description: The black rose, Aeonium arboreum var. atropurpureum f. nigrum cv. Schwarzkopf (Zwartkop), is a branching succulent shrub that produces magnificent, shiny black-purple, leaf rosettes at the ends of its branches. It reacts to sunlight, and the stronger the sunlight, the blacker it becomes. It really is quite extraordinary. It's fleshy, but then if you touch it to break the end of the leaf, it feels almost like plastic. It produces golden pyramids of flowers in late spring.
Stem: Forms grey-green beached trunk, spread 25 to 60(-100) cm.
Rosettes: Rosettes are formed at the ends of the stems.
Flowers: Yellow flowers that form long conical clusters.
Blooming season: Spring to summer.
Remarks: The cultivar 'Zwartkop' is the showiest variety of Aeonium arboretum with tall arching stems and large heads so deeply purple that it is almost black. It differs from the common Aeonium arboreum var. atropurpureum which has somewhat shorter stems and smaller heads with purple foliage. Sometimes it produces nice crested stems and seems to to change in and out of its crested mode during the years (see: Aeonium arboreum atropurpureum f. cristatum). 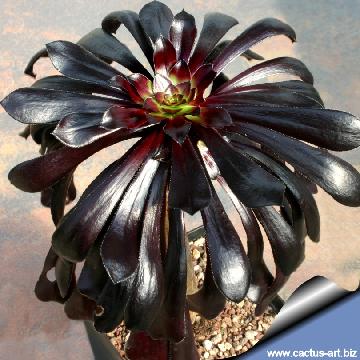 The 20 cm rosette of almost black leaves on is very showy. Photo by: Cactus Art 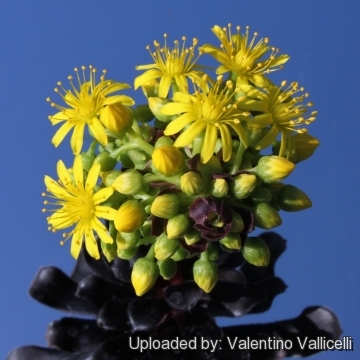 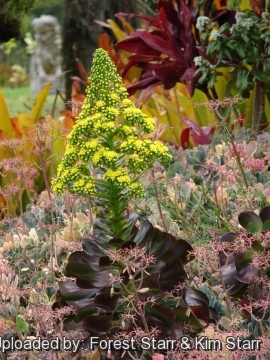 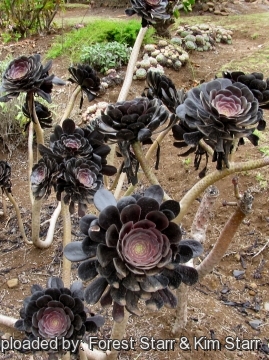 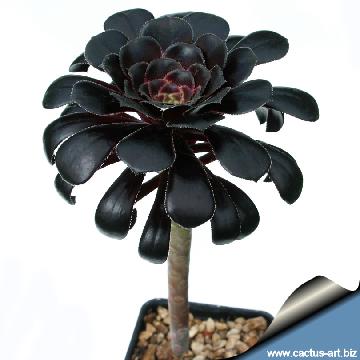 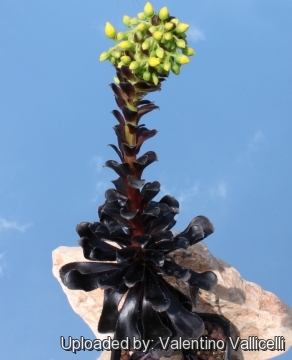 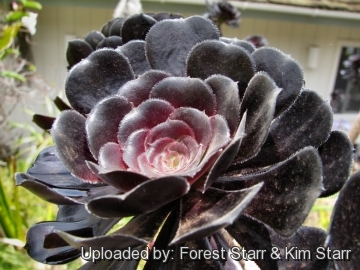 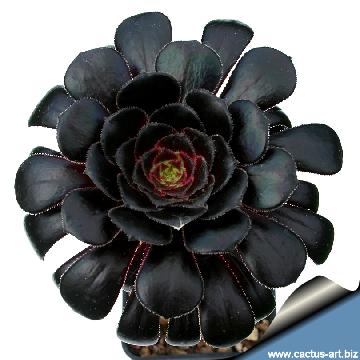 Cultivation and Propagation: It requires gritty well drained potting mix. Water deeply but infrequently. Plants are allowed to thoroughly dry in-between waterings. During the winter months restrict water to about once a month, or just enough to keep the foliage from shrivelling. Position in full to part sun in a sheltered spot, but the bright light enhances the rich hues of the darker Aeoniums, and the subtle blushes of the other colours, but prefers light shade to shade in summer. The plants tend to go dormant in the summer and look a little tired sometimes, but they perk up again in the fall. Summer is the natural dormant season for this species in its native land. Needs protection from severe winter frosts (Hardy to -2°C or a little less for short periods), over winter under glass in all but the mildest of gardens.
Propagation:: Aeonium arboreum var atropurpureum 'Schwarzkopf' is easily propagated by cuttings in the spring. When the stem becomes too tall, just cut the top rosette with a piece of stem and plant it. It will soon take root, while the plant left with just the stem will soon grow new buds that can be in turn used for propagation. Time to take cuttings: April to July.
Uses:: Aeoniums make excellent summer bedding plants, since their architectural shape contrasts well with most other bedding plants. They can also be used effectively planted in containers.