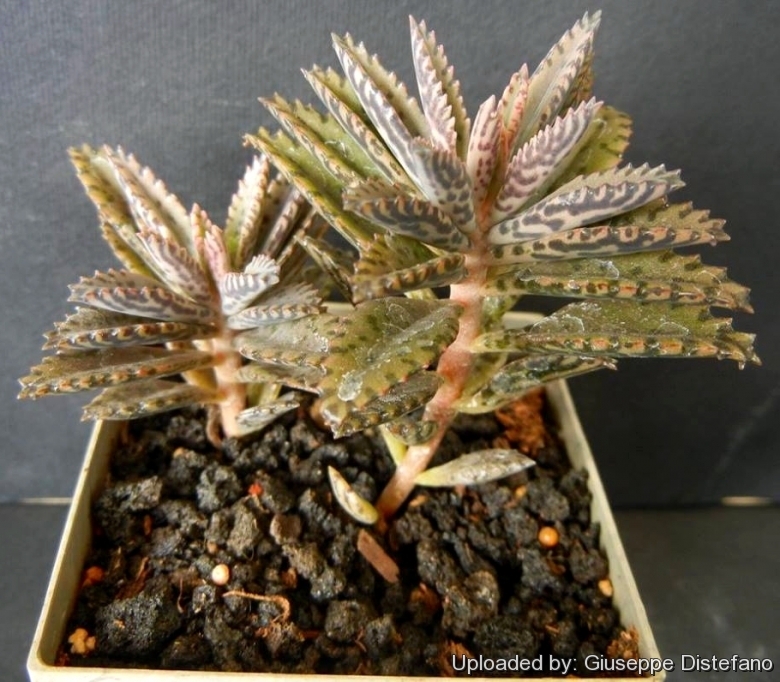 Origin and Habitat: Kalanchoe daigremontiana is native to the Fiherenana River valley and Androhibolava mountains in southwest Madagascar. It has been introduced to numerous tropical and subtropical regions, such as Florida and in coastal southern Texas, Puerto Rico, Pacific islands (Galápagos, Hawaii, Fiji, Marshal, New Caledonia, Niue) subtropical Africa and South Africa, Australia (Queensland), India, Pakistan, China, New Zealand, and parts of the Canary Islands.
Habitat and ecology K. daigremontiana is widely cultivated in gardens in tropical countries. It is well established and an aggressive weed naturalized almost every where and commonly spreading along roadsides and on waste areas, the exudates of its roots can inhibit the growth of nearby plants, as can extracts of its shoots.

Description: Kalanchoe daigremontianum (Bryophyllum daigremontianum) also called Mother of Thousands, Alligator Plant, or Mexican Hat is a slender monocarpic, perennials, glabrous, succulent herb. The cylindrical unbranched shoots are erect, about 25–40 cm tall of up to 1cm thickness and closely marked by leaf scars. The leaves are triangular, glaucous bluish green and faintly marked with brownish black spots. The bare stems with the upper whorl of leaves give plants the appearance of miniature palm trees. Like other members of the genus Bryophyllum, it is able to propagate vegetatively from minute plantlets that develop on the leaf edges and are shed one after the other. All parts of the plant are poisonous to humans, stocks and small animals.
Stems: Mostly simple or few branched from the base, stout, terete, 5–40(-150) cm tall and 0.5–2 cm across. Adult plants can also develop lateral root structures on its main stalk, as high up as 10-15 cm from the ground. The main stalk may bend downwards due to the weight of foliage and plantlets, in this case the lateral roots to take up root of their own, anchoring into the soil and eventually developing new primary stalks which establish themselves as independent plants.
Leaves: Opposite, evenly spaced, simple, petiole 1–5 cm long, lamina fleshy, narrowly triangular-hastate to lanceolate, (5-)15–20(-28) long, (2–)3.5–6-(12) cm wide, dark glaucous green above and with purple markings beneath, the base subcordate or auriculate, apex acute, margin coarsely serrate with teeth 5–10 mm apart. The margins of these leaf-like organs have spoon-shaped bulbiliferous spurs that bear young plantlets (bulbils). The plantlets form roots while on the plant.
Inflorescence (cymes): Lax, umbrella-like terminal, paniculate, 1.5–3 dm diameter; branches to 15 cm long. Pedicels 4–15 mm long.
Flowers: Pendulous, large, bell-shaped, bisexual, 4-merous, rose-colored, pink or lavender. Calyx green or purplish, not inflated, 6–10 mm, tube 3–4 mm, lobes triangular, glabrous, acute, 3–7 x 2-4 mm, equaling or longer than tube, apex acute. Corolla tubular, pink or lavender, (18-)20–23(-30) mm long, not contracted basally, lobes obovate, 6–12 mm, apex rounded, apiculate. Filaments inserted at the middle of corolla-tube. Carpels 4, styles smaller than the ovary, numerous ovules per locule. Nectar scales oblong, 1.5-2 x 0.3-1 mm.
Fruit: A group of 4 follicles each of them 7-10 mm long and 2-4 mm.
Seed: 0.6-1 x 0.2-0.3 mm, oblong with longitudinal striae.
Phenology: Flowering is, however, not an annual event and will occur sporadically if at all. Particularly in climates with distinct seasonal temperature differences, flowering is most frequently observed at the beginning of a warm season.
Physiology: Plants of the genus Bryophyllum as well as many other plants growing in arid regions photosynthesize through Crassulacean acid metabolism.
Chromosome number: 2n = 38. 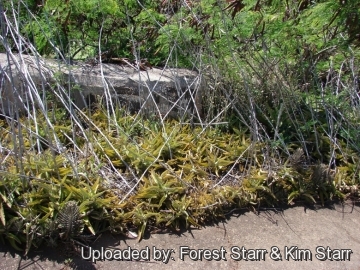 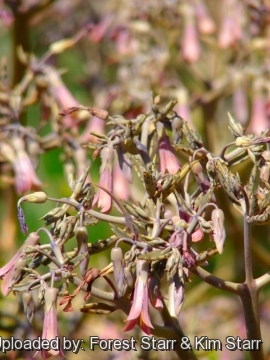 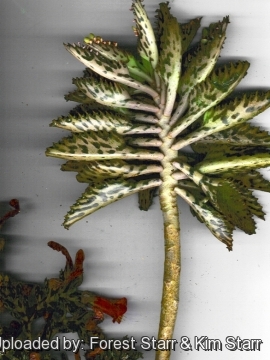 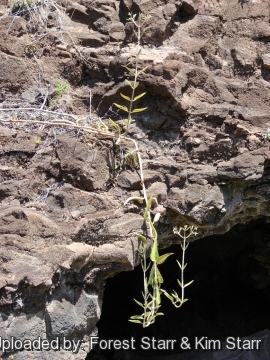 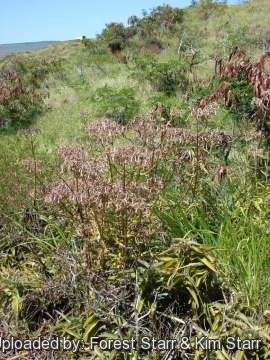 Cultivation and Propagation: This plant is almost indestructible, does not require any care... no care at all, it will grow. Sure it like water, but it is very drought tolerant... throw it on the trash piles and it just keeps growing and flowering. Kalankoe daigremontiana isn't hardy to severe freeze, but seem to tolerate everything else. Be careful with this species in outdoor culture, once it gets into a planting bed it is almost impossible to get rid of it, a few tiny plantlets seem to survive any attempt to weeding them out every time, and then they reproduce like crazy again. These are very easy pot plants due to their drought tolerance, and in fact will grow in pretty deep shade without much trouble. Good thing they don't have nasty roots- they can be pulled or scooped away where not wanted. It need to be covered at least and housed in cold climates. They are absolutely gorgeous as a cut flower in a tall stemmed green vase. However the flowers are produced only by healthy plants grown on optimal conditions:
Watering: As a succulent plant, Kalankoe daigremontiana can survive prolonged periods of drought with little or no water.
1. It is best to grow them outside over the summer in an oversized pot so they grow large quickly with the extra fertilizing.
2. Repot them in Autumn and left outside in a bright but cool and dry location until first frost.
3. The cool temperature along with the shorter days at the back of the Solarium where the light levels are relatively low stimulate the production of abundant flower buds.
Propagation: This succulent produces its offspring in the margins of its triangular leaves but every part of it will root and grow new plants.
Warning: Parts of Kalankoe daigremontiana is toxic, it contains a cardiac glycoside – daigremontianin. All members of Kalanchoe are toxic for livestock, birds, small animals and humans.