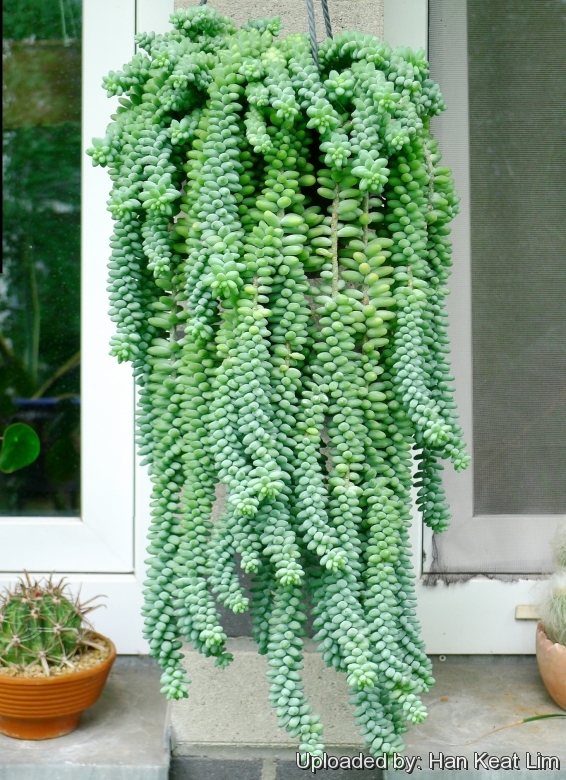 Origin and Habitat: 'Discovered' in 1970 in a nursery, the origin of this plant is quite an enigmatic mystery. There is no known record of 'Burrito' having occurred in habitat, so far its native habitat is unknown to science. As 'Burrito' seems similar to the cliff dweller Sedum morganianum, which is native to Veracruz, Mexico and forms long cascading stems of glaucous blue-green leaves, there has been conjecture that perhaps 'Burrito' is a natural Sedum morganianum hybrid.

Description: Sedum burrito, also known as burro's tail, is distinguishable form the related Sedum morganianum for its shorter, fatter, rounder leaves and “tails”. Stems that emerge from the plant's crown are thickly clad with juicy, grey-green leaves, which overlap like the coarse hair on a donkey's tail. The leaves are also less prone to breaking off the stem. In the summer the buds on the tip turn pink and begin to bloom. Donkey Tail sedum is very fragile and that the little bean leaves fall off quite easily.
Habitat: Plants grow as dangling bunches of medium-sized, densely clustered stems that easily trail over the edge of a hanging basket. The "the cascading chains" can get 1 m long or more.
Stems: Ever-lengthening stems covered with overlapping pale-green leaves that pop off easily. From a distance, stems appear braided.
Leaves: Short, alternate, elliptic to oblanceolate or spathulate, "jelly bean" like, stubby, stalkless, tightly packed along the trailing stems, with blunt tips. They are juicy, smooth, grey-green covered with a bluish bloom and may take on a pink-purple hue in full sun or a dry environment, especially during cooler winter months, otherwise the leaves remain grey-green. The amount of sun exposure affects how much purple blush the leaves exhibit. Leaves are brittle and a slight bump can send them falling to the ground. However, many of them will become rooted and give rise to new plantlets.
Flowers: Small dull coloured and borne at the tips of the stems. 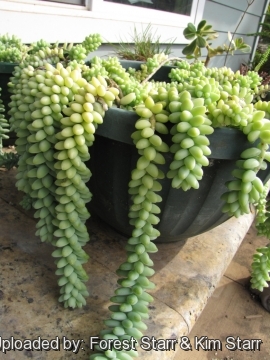 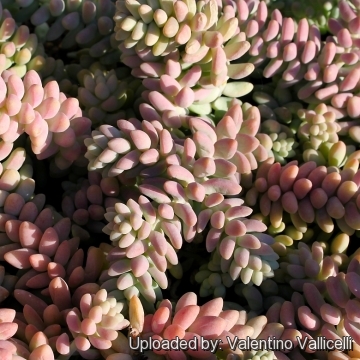 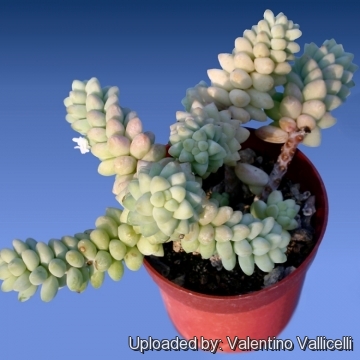 The stems hang down the pot and are closely covered with glaucous-green leaves, fat and packed together. Photo by: Valentino Vallicelli 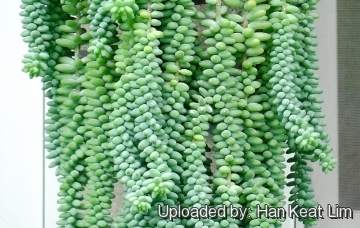 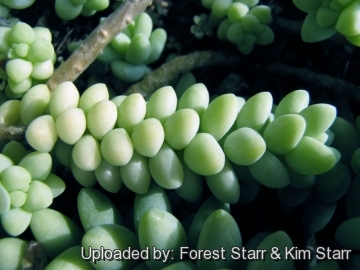 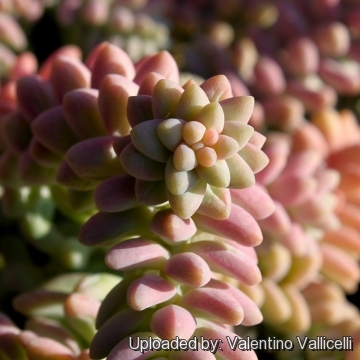 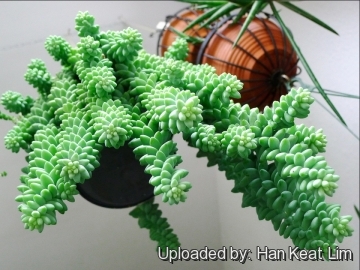 Sedum burrito Photo by: Han Keat Lim
Send a photo of this plant.

Cultivation and Propagation: Sedum burrito is always an interesting plant and easy to grow in container or in the rock garden in warm areas. It is tough, sun and drought tolerant, but also will do well in partial-shade. Few plants need less attention than sedums. The plants make active growth in fall/winter, unlike most other stonecrop and propagate easily.
Soil: Porous soil with adequate drainage. Outdoors it does not prefer rich loamy soil; gritty dirt with pea gravel suits it.
Repotting: Repot Sedum burrito only if you see roots coming out of the pot's drainage holes.
Fertilization: Feed them once a season with a water-soluble foliage houseplant fertilizer diluted to half strength. For outdoor plants, cut old stems back to ground level in the spring, and apply a small amount of general-purpose fertilizer. Water well to move the fertilizer down to the roots.
Watering: It takes little water & could rot if watered too often. During water thoroughly when soil is dry to the touch. It can take a great deal of drought, but seem to do better with regular (but moderated) watering and it is best to refrain from watering it until the rootball has dried out completely. During the winter months, plants are watered very little. Its succulent leaves will store enough water to survive for long time. For outdoor plants, additional watering is rarely needed, except during extended droughts.
Exposition: It need full sun to light shade with ample airflow, but a sunny spot is nicest, though in warmer climates it needs protection from too much sun because it is not very heat tolerant.
Frost Tolerance: Protect from frost. They are intolerant of frost.
Uses: Use them in rock gardens, dish gardens or as a fast-spreading ground cover for dry areas, especially on slopes.
Propagation: This is a tough plant which spreads easily by cuttings in summer. Remove a small piece of stem and left for a period of 2-3 days to callous. Then insert the end of the stem into a container filled with fast-draining potting soil. Water it well, then put the pot in a bright spot out of direct sunshine. Water it whenever the top inch of soil feels dry. In a few weeks it will develop healthy roots. New plants may be grown from leaves (or beans) that drop off or are separated from the stem and laid on the soil. If the plant is repotted some of the bottom leaves can be removed, in order to attempt propagation.