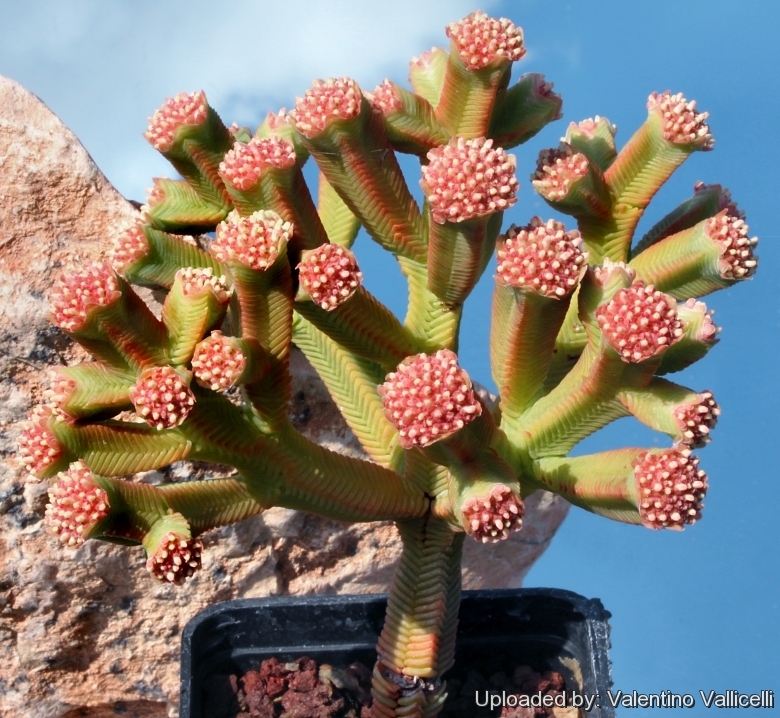 Crassula pyramidalis Photo by: Valentino Vallicelli
It has Interesting “leaves” that are pressed tightly against the stem forming a quadrangular column. Makes unusual micro mini indoor Bonsai or houseplant.

Origin and Habitat: Eastern Cape, Northern Cape, Western Cape, Southern Africa, Africa. Mainly foun in the Southern Great Karoo from the eastern side of the Bokkeveld Mountains to Somerset East in the Eastern Cape.
Habitat: Crassula pyramidalis is found in the succulent Karoo, on coastal plains, dry Fynbos and hill-tops on quartzitic sand stone pavement, either in summer or winter rainfall areas. This species is widespread, locally very common and not declining.

Description: Crassula pyramidalis is a small sparingly clustering succulent or small shrub, 3-13 cm tall (some-times longer), 20-50 mm in diameter with numerous closely imbricated leaves, in four precise ranks forming a quadrangular column in green to reddish-brown. It is pretty slow growing. When mature a head of creamy white , pleasantly spicy flowers, reddish in bud, appears at the apex of each branch, unfortunately heralding the death of the plant.
Stem: Suffruticose, erect to decumbent, imbricated with leaves throughout, dichotomously branching which topples over with age, but variable in size.
Roots: Fibrous.
Leaves: Small (4-8 mm across), ascending, equal-sized, extremely thin, flat, triangular-ovate, acute or subacute, with strongly reflexed margins, somewhat keeled, glabrous, bright green to brownish-green, 4-ranked, firm and closely stacked on top of each other, connate at base, forming a perfect minaret-shaped quadrangular column about 12 mm in diameter, tappering at the obtuse tip. Margins entire, tip bluntly acute. In full sun sun the apical leaves can take a nice purple or reddish-brown tinge. In the axils of the the densely ovelapping leaves are numerous villous hairs, which are capable of absorbing humidity, which precipitates onto the leaf margins in the form of dew.
Flowers: Small sweet-scented white to cream-pink appearing in dense, sessile, terminal or axillary clusters (cymose capitula) the basal part partly hidden by the leaves. Sepals up to 5 mm long oblong-lanceolate, margin ciliate, tip obtuse. Calyx tubular ampulliform, about 12-14 mm long. Petals white to cream, oblong-elliptic, connate below, tapering above into long, lanceolate, much longer than the calyx with a blunt beak. Anthers yellow to bright orange. Stigma subsessile. Bud reddish.
Blooming season: Mid spring to summer, unfortunately plants die after blooming.

Subspecies, varieties, forms and cultivars of plants belonging to the Crassula pyramidalis group

Notes: Crassula is a very large genus. In general, only the South African species are of interest to the collectors. The flowers are usually described as inconspicuous, but when accorded favourable conditions as to sunlight and a free air circulation they are pretty nice. 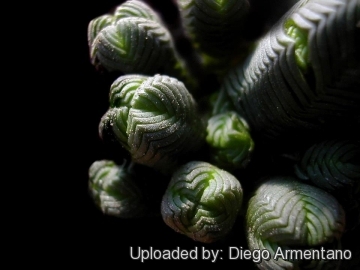 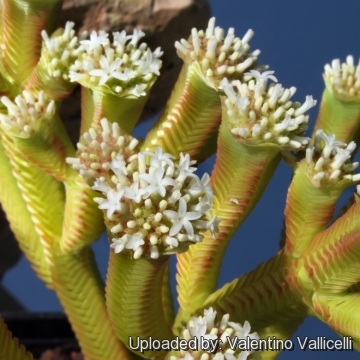 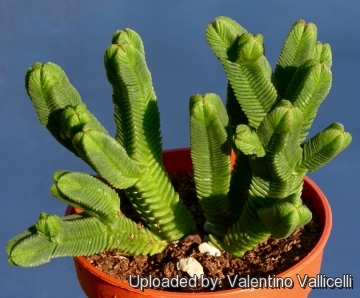 The leaves are pressed one upon another, so that the plants look like a fleshy green stem without any distinct leaves. Photo by: Valentino Vallicelli 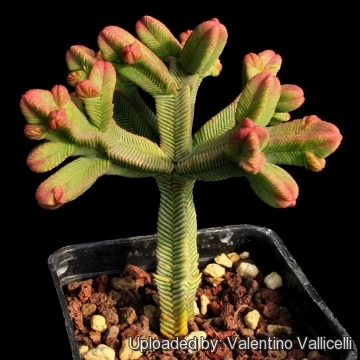 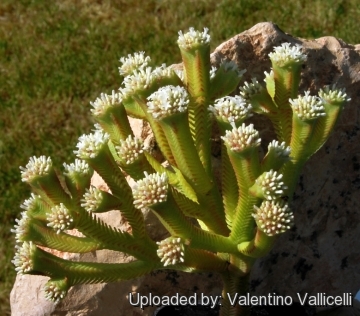 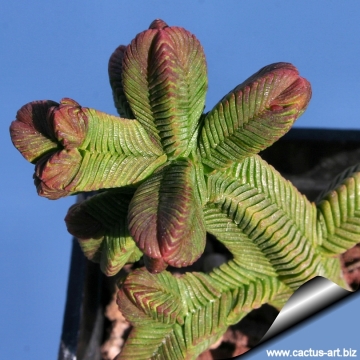 The flat, triangular leaves are pressed close together in four rows. Photo by: Cactus Art 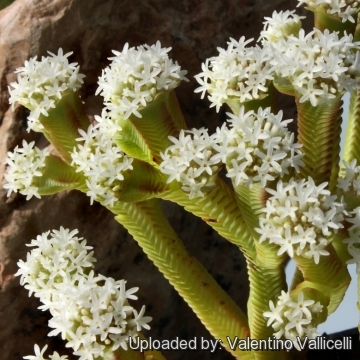 After the seeds ripen the plant dies, but they can be preserved by rooting non-blooming lateral shoots. Photo by: Valentino Vallicelli 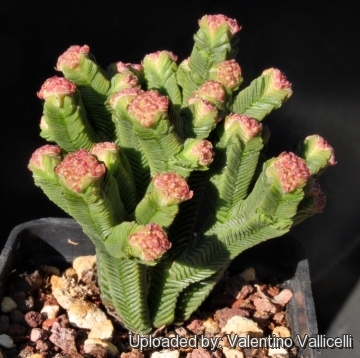 Cultivation and Propagation: Crassula pyramidalis is easy to grow under a wide variety of climatic conditions provided it is planted in a well-drained situation given adequate water but not over-watered.
Growth rate: It is a pretty slow grower.
Soil: Plants grow well in a well-drained mineral soil.
Pots: It needs a relatively shallow pot to accommodate its fibrous roots and provide a very good drainage. It may stay in the same pot for many years.
Watering: It needs moderate water – not too wet nor too dry from autumn to spring with regular water in summer (careful watering required in winter), fairly drought tolerant elsewhere.
Fertilization: Light fertilizer seems to boost its growth whenever additional water is given. Feed it during the growing season with a fertilizer specifically formulated for cactus and succulents (high potash fertilizer with a dilute low nitrogen), including all micro nutrients and trace elements diluted to ½ the strength recommended on the label. It thrive in poor soils and needs a limited supplies of fertilizer to avoid the plant developing excess vegetation, which is easily attacked by fungal diseases.
Special need: Provide very good ventilation. Nearly all problems occur as a result of overwatering and poor ventilation, especially when weather conditions are dull and cool or very humid.
Exposure: It cannot take direct sun in summer but generally needs sun part of the day to bloom. In deep shade it gets pretty weak and leggy and eventually rots and dies.
Pest and diseases: Crassulas are sensitive to mealybugs. Protect against frost.
Maintenance: After growing for several years tend to become untidy, and should be cut very short or restarted from cuttings.
Hardiness: Outdoors in frost free areas, indoors all other zones
Propagation: Seeds/ Stem cuttings. Sow seeds in autumn. Plants root easily from cuttings, place cuttings in clean river sand, mist every three to four days, roots should appear within 2-3 weeks.