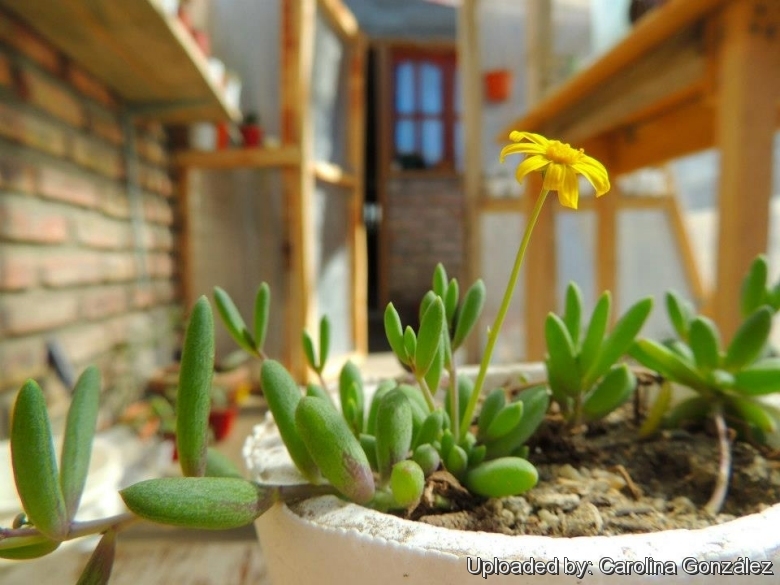 Origin and Habitat: Little Karoo and also not very far from the coast in the Eastern Cape to about Uitenhage. The species is naturalised in Algeria and Tunisia.
Altitude range: 20 - 1220 metres above sea level.
Habitat and ecology: The habitat is dry rocky flats.

Description: Othonna capensis (little-pickles), almost always called Othonna crassifolia by the florists, is a trailing perennial succulent herb, becoming somewhat woody toward base. The plant branches freely and looks like a green version of Senecio serpens, but leaves (which average about 1-2 cm) are shaped like cucumber pickles, slender, cylindrical grey-green. When the plant is stressed, leaves turn shades of yellow, lavender, and red. Flowers, which close in low light, also are senecio-like, in that they are daisy-shaped, yellow on the top of slender stems and appears in spring through autumn and sometimes year-round. Blooms emerge from small violet-hued pea shaped buds and persist after blooming as little white puffs. While the foliage is only 5-8 cm tall, the flowers raise up on short stems not more than 2-5 cm above the leaves. Othonna capensis has become very popular in general horticulture as a low-growing species that answers to all the requirements for being the perfect groundcover and spreads to about 30-40 cm wide. It forms a thick mat of succulent leaves and grows very quickly.
Stems: Creeping or procumbent, branched, slender, purplish, glabrous, much-branched, becoming somewhat woody toward base, sometimes rooting at nodes.
Leaves: Scattered along stem or in whorls at base of inflorescences, glabrous except for tufts of hairs at base, apetiolate, succulent, light- to bluish-green, reddish at apex, terete, obovoid-cylindric, entire, pointed, (7)–10–20–(25) mm long, up to 15 mm wide, slightly furrowed, apex cartilaginous. In situations where plants receive bright, direct sunlight, the leaves turn a beautiful shade of purple.
Inflorescences: Capitula radiate, solitary or paired at terminal end of stems. Involucral bracts (phyllaries ) 8–9, ovate-elliptic to oblong, 4–6 mm long. Ray florets c. 10–15. Ligules yellow, 3.5–8 mm long. The long ray florets tend to curl back when flowers age.
Blooming season: Virtually everblooming, this tiny plant flowers profusely, mainly from Spring to Autumn in temperate areas, but mostly from Autumn to Spring in warmer climates. The flowers open only in strong light and close in a wilty pose on overcast days or when the sun is not directly on them.
Fruits (achenes): Glabrous or hairy. 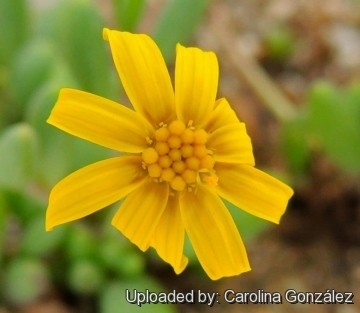 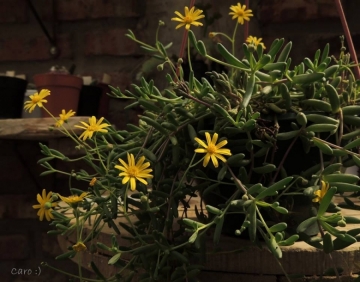 Cultivation and Propagation: Little pickles grows as a groundcover and makes a very ornamental pale green colouring, the flowers only open in the sun but at almost any season of the year each shoot has a flower stalk on the end of it. It is a great little plant along a dry border, in a container or scattered in with other succulents in a well-drained rock garden. As a carpet-forming creeper it is very useful as a soil binder, especially in denuded areas prone to soil erosion. The "little pickles" is one of the best succulent for a hanging baskets, and is also suited for green roofs. Similar to the succulent senecios it resembles, Othonna capensis likes warmth, regular water, bright light, and a dry rest in summer.
Soil: It requires a very free draining enriched soil, mildly acidic to mildly alkaline but is very tolerant of poor soils, best in a raised bed, along a rock wall or container if soil drainage is not great.
Watering: It needs moderate water during from spring to autumn, keep rather dry in winter or the plants may rot at the base. But it adapts to different growing conditions from extreme heat and drought, to high moisture as it has a low rot potential. In hot climates a dry rest in summer is preferable. Out-of-Doors along the coast it grows great with other succulents in rarely irrigated beds.
Exposition: They seem to do well in full sun and will tolerate coastal conditions, but thrives also in half shaded positions.
Frost Tolerance: Considered hardy to -12° C and some say tolerant to USDA Zone 5 (Coldest zone where hardy). Out-of-doors it will better resist if sheltered by the winter rains, seen that the humidity and low temperatures render it more sensitive to rottenness. Plants in containers however, suffered major leaf loss.
Wind and salt tolerance: Tolerates well high wind and second line salt wind.
Maintenance: The flower stems need to be removed to keep a tidy appearance. These species do tend to get sort of leggy, which is particularly a problem if grown as a potted plant, and yearly trimming back is often necessary.
Propagation: Little pickles may be increased easily by planting pieces of the stem and does best. Make cuttings in late spring to summer, just take a cutting of the plant let it dry for 1 week and stuff it in the ground (preferably dry, loose, extremely well draining soil).