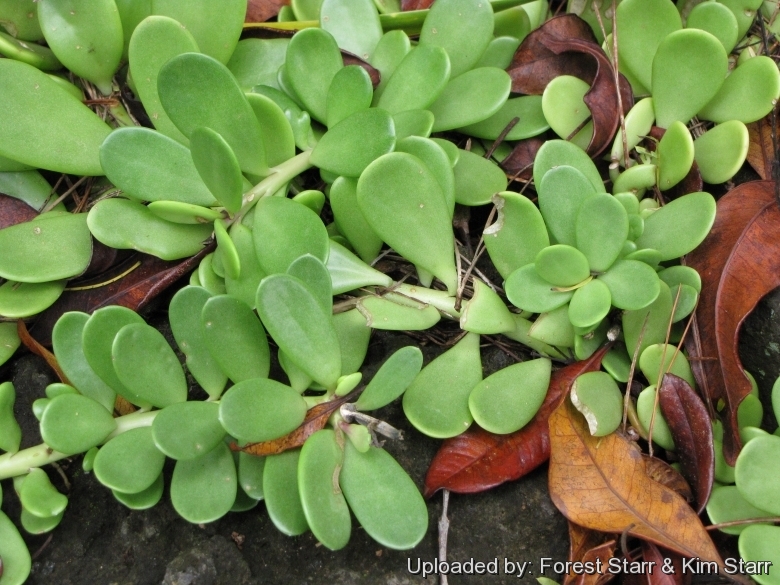 Origin and Habitat: Senecio jacobsenii is fairly widespread and not uncommon in Kenya (Eldama Ravine, Machakos and Northern Frontier districts) and Tanzania ( Kondoa, Moshi, Musoma and Serengeti districts). It is also ordinarily cultivated near houses in Uganda but non-native.
Altitude range: 1300–2450 metres above sea level.

Description: Senecio jacobsenii, colloquially known as "Trailing Jade" or "Weeping jade", is a glabrous evergreen, perennial leaf-succulent creeper with flat, overlapping leaves that are shades of greenish pink and maroon, along green stems, and brilliant orange blooms in late summer and early fall. This plant has also been called Kleinia petraea and Notoniopsis petraea and the correct name is still in debate today.
Stems: Branches few, thick, fleshy, creeping or procumbent and rooting or subterranean as rhizomes, to 50 cm long, 5-10 mm in diameter, soft, grey-green, often flushed purple and glabrous
Leaves: Sessile, spirally set or arranged more or less distichously, erect or spreading and overlapping horizontally like shingles, oblanceolate, obovate or obovate-spatulate, thick, fleshy, smooth, glabrous, green, greenish pink or maroon and slightly glaucous, with an obtuse or rounded, minutely acuminate-apiculate apex, (2–)4-6.6 (-7.5) cm long, (0.7-)1-2.5(-3.2) cm thick, cuneate or attenuate into a petioloid base. Margins entire. The leaves often blush an interesting purple colour in winter.
Inflorescence: On terminal erect stalks to 30(-40) cm tall with up to 3(-5) branches, each terminating in a single capitulum (flower head).
Capitula (Flower heads): Discoid up to 3.5 cm in diameter overall, nodding or erect. Involucre cylindrical, 15–24 mm long, 12–15 mm in diameter. Bracts of calyculus 1–3 or absent, ovate or lanceolate, bract-like, 7–13 mm long. Phyllaries 6-10, usually 8, thick, succulent, glaucous or pruinose, 15–24 mm long. Ray florets none. Disc florets 30-70, orange, orange-red, orange-yellow to scarlet, corolla 15.5–24 mm long, tube glabrous, slightly expanded above the middle, lobes 1.3–1.5 mm long. The flowers have that rich cheesey smell that is typical of many species of Senecio - though not really pleasant, it is not that strong and less malodorous than some other Senecio.
Blooming season: Flower are intermittent, infrequent and never in great profusion, mainly in late-summer/early fall or in winter or with much regularity (depending on climate).
Fruits: The fruits called achenes (or cypselas) are 5 mm long and glabrous, with a conspicuous feathery pappus 1.7-2.5 cm log attached that functions as a "parachute" which enables the seed to be carried by the wind.
Chromosome number: 2n = 20. 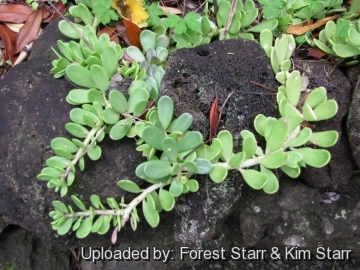 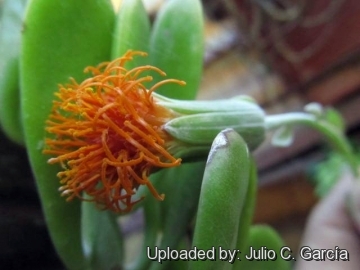 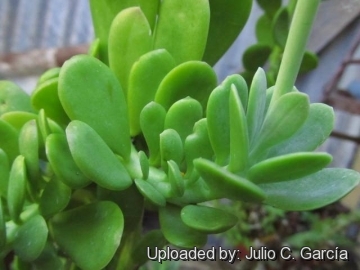 Senecio jacobsenii Photo by: Julio C. García
Send a photo of this plant.

Cultivation and Propagation: Senecio jacobsenii (Trailing Jade) is an interesting succulent creeping groundcover with the unusual colour combination of greenish pink and maroon and brilliant orange blooms. It is a most rewarding plant that grows in full sun and has no problems with extreme heat or cold down 0° Celsius. Senecio jacobsenii makes a interesting and attractive groundcover, hanging basket or window box specimen and may be best combined in a large container with other succulent types. If planted next to a wall, or in a container, the stems drape downwards as much as 120 cm. Uniquely, the leaves and the flower stand upright from the stems. In view of its spreading habit and its high resistance to drought it can be recommended for binding soil on steep banks. It is a fairly easy plant to grow but resents shady cool moist conditions.
Soil: It requires a very free draining soil used for cacti and other succulents, mildly acidic to mildly alkaline but is very tolerant of poor soils.
Fertilization: Fertilizer is seldom a necessity for these plants as the soil is rocky and desolate in their natural habitat.
Watering: It needs moderate water during from spring to autumn, keep rather dry in winter or the plants may rot at the base. The plant will tolerate being dried out much more than other types of succulents. The converse is also true, the plant will suffer greatly from over watering.
Exposition: They seem to do well in full sun to part shade such as at the base of open trees, but thrives better in hot sunny positions and will tolerate coastal conditions, but prefers light shade in the summer.
Frost Tolerance: It is cultivated in open air in the tropical and warm Mediterranean climate, with temperatures which it is good to keep over the 5°C, but it is hardy to -7°C (some say as low as -10°C, even if with some damage to the foliage) in these situations it will better resist if sheltered by the winter rains, seen that the humidity and low temperatures render it more sensitive to rottenness. Plants in containers however, suffered major leaf loss. USDA Zone 9b to11.
Wind and salt tolerance: Tolerates wind and second line salt wind.
Maintenance: The flower stems need to be removed to keep a tidy appearance. These species do tend to get sort of leggy, which is particularly a problem if grown as a potted plant, and trimming back is often necessary.
Traditional uses: Minor medicinal against cattle fleas and lice.
Propagation: It is easy to propagate by cuttings in late spring to summer, just take a cutting of the plant let it dry for 1 or 2 weeks and stuff it in the ground (preferably dry, loose, extremely well draining soil).